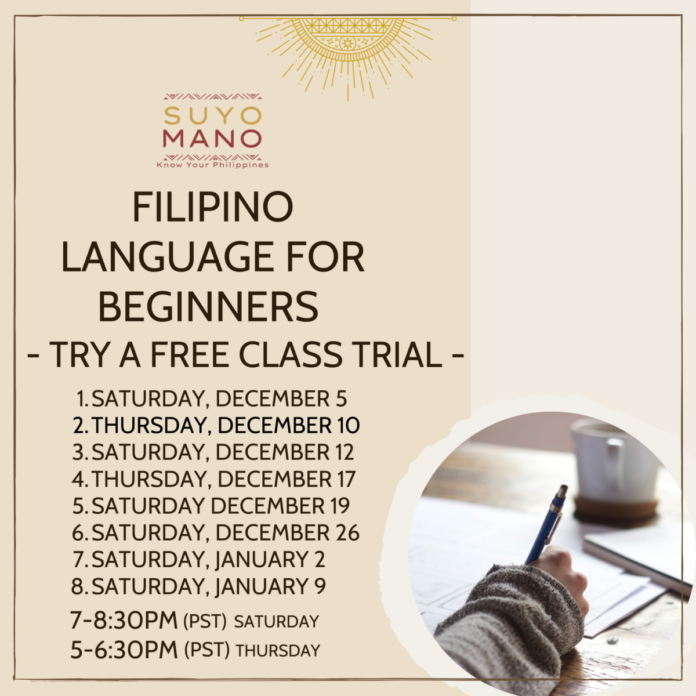 Sumoyano was founded by Mary Lou Cunanan in August 2020, with the name derived from suyo which means gentle affection and mano which is a gesture of respect to the elderly. It has on its board Aames Aguas, Xerxes Itao, Jackielyn Junio, Dr. Catherine Sy Luib, and Emmanuel Damian who all believe in the preservation of Philippine culture through digital education.

In celebration of Filipino Heritage Month in October, Suyomano partnered with PG&E Samahan in San Francisco, California and Galing Foundation in Atlanta, Georgia to conduct Filipino cultural classes. Enrollees for these classes were mostly Filipino-Americans eager to expand their knowledge and Filipino heritage.

Other partners and supporters of Suyomano include the Manila Heritage Foundation in San Francisco, San Diego’s Filipino Food Movement, Filipino Cinema, and most notably, the Philippine Consulate in Hawaii.

Suyomano was recently featured in an NBC News article on Asian Americans using quarantine to learn their families’ languages. It was also one of the top finalists in the recent Reapra and Future Female Business Hackathon, which featured other finalists from Southeast Asia.

Locally, Suyomano launched a Bayanihan campaign to support Philippine tourism despite the pandemic, and signed an agreement with the Intramuros Administration to make Old Manila virtual tours possible.

The Technological Institute of the Philippines (T.I.P.) closed out 2020 with a consultancy and training engagement for a green-gray infrastructure capacity building program. The...
Read more

IBM has partnered with the Asia Pacific College (APC) to host the SkillsBuild Innovation Camp that aims to accelerate their students’ journey to becoming...
Read more

A group of Information Systems students from the Technological Institute of the Philippines (T.I.P.) Quezon City and their iSAFER sex trafficking prevention app took...
Read more