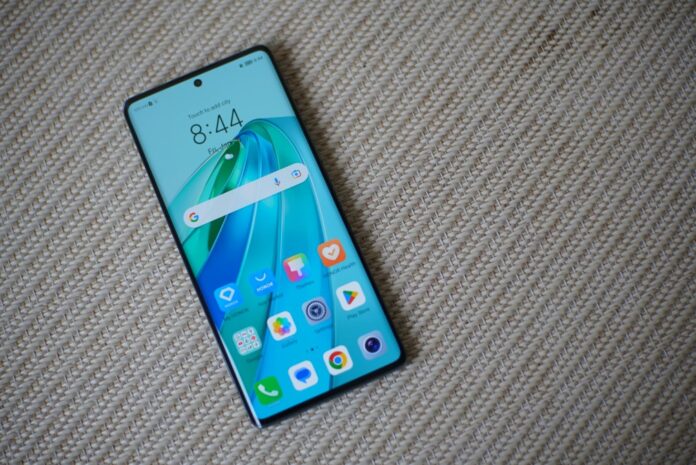 Gorgeous is the only way to describe the HONOR X9a 5G. If HONOR had not told us that this would be a “budget” phone, I would have assumed that this phone would be priced somewhere on the higher end.

Our test unit came in the refreshing Emerald Green color. The back is made of premium plastic that’s great for two reasons: (a) it’s not a fingerprint magnet; (b) you can confidently display the phone even without a case.

The phone has a 6.67-inch curved OLED display with a 120Hz refresh rate. HONOR takes pride in the 0.65mm Super Reinforced Glass display, which our drop test demonstrated can withstand even the most absurd accidental drops.

The curved display also helps minimize the phone’s body, making the HONOR X9a 5G one of the slimmest smartphones in the market at just 7.9mm thin.

On the display are the selfie camera and the earpiece. At the back is the triple camera setup which resembles HONOR’s flagship Magic series. On top is a mic hole and an IR-blaster, and below are the downward firing speaker, USB-C port, and sim tray. The volume and power buttons are located on the right of the device.

Hardware-wise, the HONOR X9a 5G has all the right stuff, considering that for a budget phone, HONOR had to balance things out. Powering the phone is a Qualcomm Snapdragon 695 processor that is almost a year old and not the speediest out there, but it’s good enough to get the job done.

Paired with the processor is 8GB of RAM expandable up to 13GB by utilizing 5GB from your storage, thanks to HONOR’s RAM Turbo utility. Internal storage is a whopping 256GB.

I ran several benchmarks which, surprisingly, went beyond expectations. The phone scored 402526 in Antutu V9.5, as well as 666 for Single Core and 1900 for Multi-Core in Geekbench 5 — very decent outcomes for the processor. In actual use, the phone performed very well. I ran League of Legends: Wild Rift and Genshin Impact with both running well. Wild Rift ran at 60fps on “Super High” resolution while Genshin Impact was able to run on the highest setting at around 20-30fps.

Moving on to the camera, the HONOR X9a 5G has a triple camera setup at the rear with the main shooter being 64-megapixel. It has a secondary 5-megapixel ultrawide camera and a 2-megapixel macro lens. In daylight, it captures get images, but low-light shooting could stand some improvement.

Here are some sample shots on the device:

For video, it can capture only up to 1080p at 30fps. It does have some other features like multi-video recording which can be useful for vlogging, and some video story templates to capture those memorable moments.

Lastly, the HONOR X9a 5G has a 5100mAh battery with HONOR’s 40W Super Charge. The battery lasted about a day and a half with moderate use (YouTube binge and a bit of gaming). The 40W fast charging is able to fully juice up the device in around 40-45 minutes.

HONOR has surprised me with the HONOR X9a 5G. Rarely do I see a phone that makes me say, “That’s a looker!” When the HONOR X9a 5G arrived for testing, I was stunned by how thin it was and by the bold choice of having a curved display.

Despite their aesthetic appeal, curved displays have gone out of favor because of accidental touches. Considering its ‘budget phone’ tag, I was initially afraid this would be the case for the X9a 5G. Surprisingly, during my testing, no accidental touches were recorded, even during intense gaming sessions, and even after horrific drop tests.

Another great thing about the device was the choice of an OLED display. To be honest, I think the display is the best part of this phone, and I have been enjoying my nightly movie binge sessions on it. Even with only a single downward-firing speaker, it can be loud.

The last thing I want to commend is internal cooling. The phone stayed surprisingly cool even during benchmarking and heavy gaming sessions.

Coming in at PHP16,990, HONOR has brought their A-game to start the year. The HONOR X9a 5G is one to look out for. The premium look and design paired with the nearly indestructible body make it a pretty good steal for the price.

Visit any HONOR Kiosk and Partner Stores near you or check out HONOR’s official stores below: