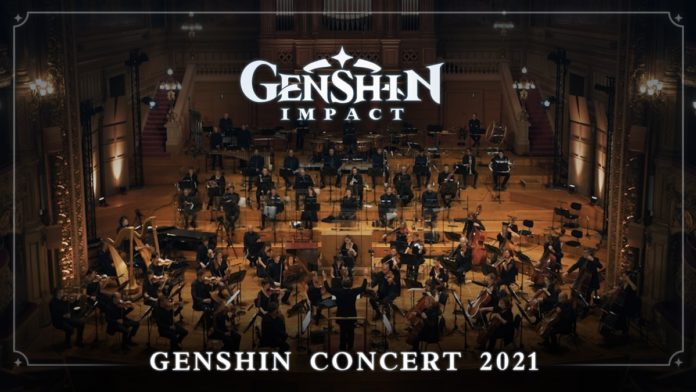 Announced at Gamescom 2021, the concert will feature Genshin Impact music originally composed and produced by Yu-Peng Chen and HOYO-MiX. World-famous Belgian conductor Maestro Dirk Brossé and the Flanders Symphony Orchestra will present the original soundtracks of Genshin Impact, while talented musicians from the United States, South Korea, and other countries are ready to deliver innovative interpretations of much-loved pieces with a mix of genres to worldwide fans and players.

First released on September 28, 2020, Genshin Impact is a free-to-play open-world action RPG where the player takes on the role of the mysterious “Traveler,” who sets off on a journey to discover the fate of their lost sibling and unveils the mysterious secrets of Teyvat along the way. The game is set in the vast world of Teyvat consisting of seven nations, each with a dedicated musical theme that evokes the history and culture of that area.

The original Genshin Impact soundtracks are produced by HOYO-MiX, miHoYo’s in-house music team, and written by accomplished composer Yu-Peng Chen. Using traditional orchestral music as the base, the game’s soundtracks incorporate assorted elements of world music in themes and variations for different areas. The game has released six original soundtrack albums, and the seventh album featuring music from the recently launched Inazuma area will be coming soon in a collaboration between HOYO-MiX and Sony Music.

The announcement trailer unveils the first glimpse of the online GENSHIN CONCERT 2021, starring Maestro Dirk Brossé and the Flanders Symphony Orchestra performing a Mondstadt theme familiar to every Genshin Impact fan and player at the concert hall of Salle Philharmonique de Liège. For more than 40 years, Maestro Dirk Brossé has been a respected and award-winning composer and conductor, participating in prestigious projects around the world including the Star Wars in Concert World Tour. In addition to a symphonic performance of the Genshin Impact soundtrack by a full classical orchestra, the approximately 90-minute concert will also have multiple stages in countries including the United States and South Korea, featuring reimagined iconic tracks adapted and played by various individuals and groups of artists.

“We’ve been experimenting with varied cultural elements in Genshin Impact’s music in the past and present, and will continue to do so in the future,” said Yu-Peng Chen, composer and music producer of HOYO-MiX. ”When Maestro Dirk Brossé and the Flanders Symphony Orchestra first played the Mondstadt theme, we immediately knew we got the ideal team to recreate some of the most memorable moments in the game for fans and players. At the same time, the GENSHIN CONCERT 2021 is also a blessed opportunity for our team to communicate with gifted artists around the world and learn from their distinct interpretations of the game and music through various covers.”

The GENSHIN CONCERT 2021 will be aired on October 3, 2021, in celebration of the game’s first anniversary. All fans, players, and interested viewers can watch it online for free. Meanwhile, players can also claim the free five-star crossover character “Savior From Another World” Aloy in the game on PlayStation® in the upcoming Version 2.1, or on all platforms during the Version 2.2 update.

Genshin Impact is available for download on PS4 and PS5 from the PlayStation Store, on Android from Google Play, on iOS from the App Store, and on PC from Epic Games Store or the official website (genshin.mihoyo.com). The game has been rated T for Teen by ESRB on PS5, PS4, PC, and Google Play, and 12+ on iOS.