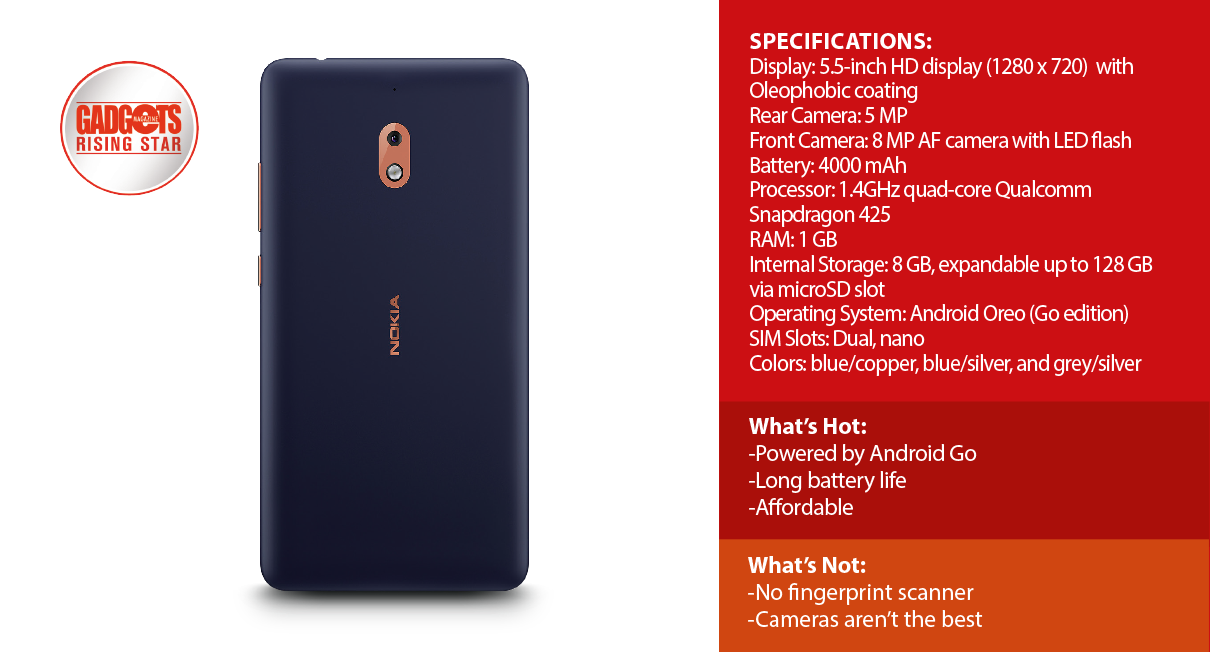 Smartphones are now becoming a necessity more than a luxury. As a nation that holds a strong record of smartphone penetration, this statement has been and probably will always be true. Just in time for its return in the Philippines, the iconic brand Nokia released a reboot to its budget-friendly model last August, and we had the chance to check out its strengths and weaknesses. Is it a hit or a miss? Let’s find out.

Simplicity and neatness has always been the trademark of Nokia’s aesthetic. Reminding us of the old Lumia phones, it has the sleek, rectagular shape and solid color of the Nokia classic. The phone is solid, and doesn’t feel flimsy at all. Accentuated with metallic copper, the phone has a polycarbonate, matte body and a removable back panel which reveals the dual nano SIM and micro-SD slots, along with its 8-megapixel camera and LED flash. Its 4000 mAh battery, however, is non-removable. Giving its 5.5-inch HD display a flat look, the Nokia 2.1 has 2.5D glass protecting the display. You can find the Nokia logo, stereo loudspeaker, and the 5-megapixel front camera on the top most part, while another stereo loudspeaker and a micro-USB port is located at the bottom of the screen. Meanwhile, its 3.5 mm audio jack is placed just above its logo. On its left side lies the volume rocker and power button.

Nokia has always excelled in the hardware department, and it continues to live up its expectations. Running this phone is a a 64-bit Qualcomm Snapdragon 425 chipset that is paired with 1 GB of RAM. This quad-core processing power helps efficiently run tasks and allow some gaming on the side. For storage of files, photos, videos, and other content, the Nokia 2.1 has a smaller 8 GB of onboard storage, which is expandable up to 128 GB through a microSD slot. For the snap-happy among us, there’s the 5-megapixel, front-facing camera that lets you take decent photos and videos as well as an 8-megapixel autofocus rear camera.

The Nokia 2.1 runs Android 8.1 out of the box under Android Go, giving its low storage the room to hold more apps and media files. This means that the pre-installed apps, together with its operating software, in Nokia’s latest entry-level phone, are optimized for lesser mobile data consumption as well as for a faster user experience. However, we experienced occasional lags when we tried playing PUBG Lite. We also noticed some delays whenever we open some notifications. We’ll be straightforward about its camera system. It can take decent photos on normal setting but performs poorly in low-light conditions. Noise is very evident in photos, which made it more disappointing. The strength of the phone is its 4000 mAh battery life that can last up to two days, and the 5.5-inch display with a 16:9 screen-to-body ratio. It also has two loudspeakers on board, producing a louder yet fine audio quality for video streaming. Through the Android Go program, the smartphone gets regular security patches and updates. It even keeps your phone safe and secure from potentially harmful apps from other sources via Google Play Protect.

Nokia’s first ever Android Go phone may have a number of shortcomings but if you’re going for functionality and reliability, then the Nokia 2.1 is a value for money handset.

Nokia is definitely back in giving a reliable, basic phone that fits your tech needs.

realme launches narzo 30A in PH