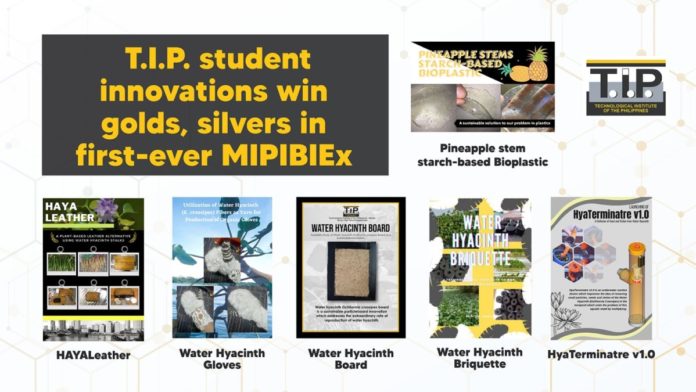 Five of the six entries from the T.I.P. high school students focused on creating solutions for the country’s problem in water hyacinth invading large bodies of water like the Pasig River while the other one concentrated on utilizing pineapple stem, one of the waste products in pineapple production.

These researches of the 44 senior high school students of T.I.P. Manila aimed to reduce the growth of water hyacinths while taking advantage of its usefulness and introducing its viability of becoming a source of income for a community. Their hard work produced a variety of innovative products made from water hyacinth and pineapple stem.

The six entries are as follows:

A total of 65 groups participated but only 19 qualified for the finals in the student category of the competition. The students virtually presented to a panel of judges from different organizations like JCI Makati and Ayala Foundation.

MIPIBIEx is a division-wide competition organized by the Division of City Schools-Manila Innovation Council in partnership with the City Government of Manila and other stakeholders.