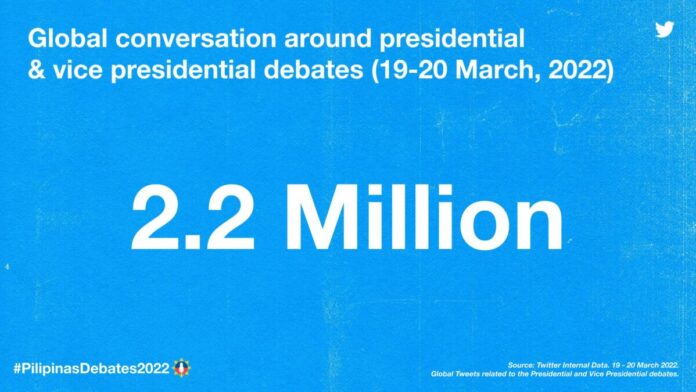 Filipinos expressed their sentiments, generating more than 2.2 million Tweets about the #PilipinasDebates2022.

Conversation among Filipinos ignited on Twitter following the first COMELEC (@COMELEC) presidential and vice presidential debate. A month of campaigning culminated in a lively political showdown yesterday and saw representation from almost all presidential and vice-presidential candidates as they engaged in democratic debate, generating more than 2.2 million Tweets globally related to the debates (12 pm, 19 March – 11.59 pm, 20 March).

The #PiliPinasDebates2022 hashtag became the #1 Twitter trending topic in the Philippines. The conversation peaked around 9:00 – 10:00 pm on Saturday, 19 March with over 138,000 Tweets during the closing remarks of the debate when vice president Leni Robredo (@lenirobredo) made her statement “The best man for the job is a woman.”

Filipinos on Twitter actively shared their opinions and reactions, spurring healthy conversations about the debates. Among the top hashtags from the debates were #PiliPinasDebates2022, #KayLeniNaTayo, and #Halalan2022 (in alphabetical order).

The discussion did not stop during the debates as Filipinos and the candidates headed over to Twitter to further strengthen their stance on the topics and issues raised during the first COMELEC (@COMELEC) presidential and vice-presidential debates. Here are some of the most engaged Tweets during #PiliPinasDebates2022. The Tweets come from the strong voices of Filipinos or Candidates that show their support during the live debates.

For all major events and happenings that are critical to the public conversation, Twitter introduces dedicated Event pages to keep people updated. Similarly, for these upcoming elections and debates, Twitter is helping Filipinos with relevant information through event pages on presidential debates and vice-presidential debates.

You can also participate in ongoing election-related conversations by using#PilipinasDebates2022 to activate customized emoji that will be available until 27 May. Inspired by the microphone used during debates and the Philippine flag, this emoji is part of our series of customized emojis aiming to be valuable visual links to aid the discoverability of election-related discussions.