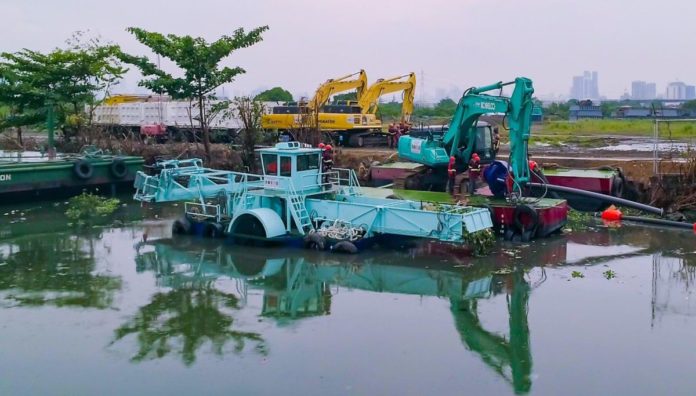 San Miguel Corporation (SMC), in partnership with the Department of Environment and Natural Resources (DENR), other national government agencies, and Metro Manila mayors, yesterday officially launched its ambitious, five-year plan to clean up and rehabilitate the Pasig River.

The project is set to become the largest ever river rehabilitation project in the country, with SMC president Ramon S. Ang announcing that the company’s budget for the undertaking is being doubled to PHP2 billion.

“There have been many cleanup efforts in the past, and government has successfully implemented a number of programs these past few years,” Ang said. “But decades of pollution and compounding problems that have rendered the river biologically dead since the 1990s are too significant and complex to overcome–even for the best-intentioned advocates and organizations.”

“We hope that with the resources and technical know-how that we are bringing into the effort today–along with the continued support of our national government agencies and local government units–we can all make a bigger difference,” he added.

To further underscore the problem of pollution in the Pasig River, Ang cited a study published by OurWorldinData.org last May, that Pasig River has emerged as the top plastics polluter of oceans in the world.

Our World in Data is a collaborative effort between researchers at the University of Oxford and UK-based non-profit, Global Change Data Lab.

Joining the Pasig River in the top ten list of rivers in the world that have the highest share of plastics emitted are six other rivers in the Philippines: the Tullahan River (no. 4), Meycauayan River (no.5), Pampanga River (no.6) Libmanan river (no.7), Rio Grande de Mindanao (no.9) and Agno river (no.10).

“Solid waste in our rivers is a serious issue, not only because it endangers our oceans, marine life, and traditional fishing grounds–which are a source of food and livelihood for our countrymen–but also because they worsen our flooding situation,” Ang said.

“Silt and accumulated garbage have made the Pasig river shallow and restrict the flow of water, worsening the flooding situation in Manila, Mandaluyong, Makati and Pasig. Our goal is to remove years-worth of wastes and increase Pasig River’s carrying capacity to divert floodwaters to Manila Bay and make it more conducive to marine life over the coming years,” he added.

The project is actually the company’s second major river rehabilitation initiative. Its ongoing PHP1-billion cleanup of the 27-kilometer Tullahan-Tinajeros River, launched last year, supports the rehabilitation of the Manila Bay

“This is a monumental task, but it is not impossible if we all work together. We are giving this same project the same commitment and focus we have put into the Tullahan project. We are confident that with the political will of President Rodrigo Duterte and the support of local and national government agencies and other stakeholders, we will be able to bring Pasig River back to life,” Ang said.

“Our experience in dredging the Tullahan for a year has allowed us to determine the most effective approach and best equipment to be used. In Tullahan, we were able to extract over 260,000 metric tons of silt and solid waste so far and the dredging has reduced the heavy flooding in the cities of Navotas, Malabon, and Valenzuela,”he said

A bathymetric survey or depth survey used to determine the topography and characteristics underwater of the Pasig River showed that some parts of the river have become shallower and measure only one to two meters in depth while some parts will have to be widened.

“We are coordinating with the DPWH to develop a dredging plan that will establish the target depth that will best handle heavy rainfall during extreme weather and minimize flooding,” he said.

Following the signing of the Memorandum of Agreement this morning at the Petron Sales Training Office in Pandacan, Ang and the government officials proceeded to inspect the new dredging equipment at the former Pandacan Oil Terminal.

The equipment to be used for the Pasig River dredging include a Cutter Suction Dredger and large 800 metric ton hopper barges.

“We will also utilize equipment similar to the ones we are using in the Tullahan river dredging. These are 45-ton backhoes in a special barge to be used especially in the removal of garbage from the bottom of the river.  We also have a weed harvester to remove any floating garbage and watery hyacinths that also block in the navigation of ferries and boats passing thru the river,” Ang said.

Cleaning the Pasig River, according to Ang, also bears historical significance for San Miguel. In 1890, La Fabrica de Cerveza de San Miguel was established along the banks of Pasig River, on Malacanang Street in the San Miguel district of Manila. The original site is now part of Malacanang Palace grounds.

Aside from the Tullahan and Pasig River cleanups, San Miguel is also looking to undertake a river channel improvement program for tributaries belonging to Marilao-Meycauayan-Obando River System (MMORS) as part of of its flood mitigation component to benefit Bulacan province, future site of the New Manila International Airport (NMIA).

PCX turns to blockchain for transparent and reliable corporate sustainability