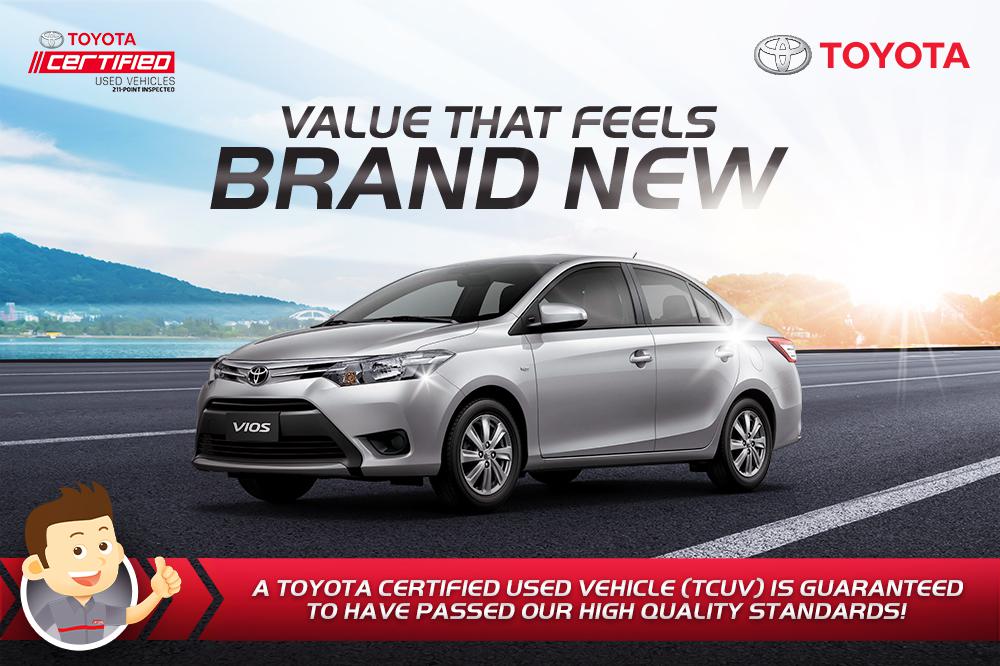 Transportation challenges brought about by the COVID-19 situation have convinced a number of commuters to seek personal modes of transport.  And with more challenging financial situation, customers are looking for affordable deals for brand new cars, while others opt for used cars.  But how can customers be assured of the quality of used cars?

In times like these when hard-earned money should go to quality products, certified used cars play an important role.  With proliferation of used car websites and outlets, it is increasingly difficult to discern which ones can deliver the best quality and value.  Toyota’s Certified Used Car (TCUV) program addresses exactly this—it brings peace of mind to the customers by ensuring that the used cars they are buying are certified by Toyota Motor Philippines (TMP).

TCUV is one of TMP’s value-chain programs that offers customers used vehicles that underwent a rigorous 211-point inspection and certification procedure before being classified as “certified used vehicles”. Cars offered by TCUV dealers come with additional limited warranty and are also qualified for flexible financing terms with Toyota Financial Services.

“Recently, most of those who inquire from our TCUV dealers are commuters who regularly use public and mass transport to get to work or to carry out essential trips for their family’s needs,” said TMP’s Assistant Vice President for Value Chain Section, Gener Castillo. “This could mean there is increased demand for personal mobility among those who see having a car as a need, but would like a more affordable option and an easier way get financing approval without compromising quality, efficiency and safety.”

“With TCUV, customers enjoy easy-to-own cars with the consistent Toyota experience as they are assured that the used cars passed Toyota’s strict and high quality standards,” added Castillo.

As of this time, only the following Toyota dealers offer TCUV units.

For Visayas and Mindanao,

Aside from offering certified used cars, TCUV dealers also source vehicles from current Toyota customers who wish to upgrade by trading in or selling their vehicle at fair value. A team of highly-skilled and accredited assessors thoroughly check the vehicle under transparent operation to guarantee that the Toyota owner gets the fair value of their vehicle.

For more information about TCUV buying or selling, customers may directly inquire at the TCUV dealer near them. For more updates about Toyota’s products and services, visit https://toyota.com.ph or join TMP’s official social media accounts at facebook.com/ToyotaMotorPhilippines, twitter.com/ToyotaMotorPH and Instagram.com/toyotamotorphilippines.

Maxus T60 markdown to maximize your home and business needs

Offering a discount of PHP 50,000 on all its T60 variants, the Maxus T60 markdown offer now gives hardworking Filipinos the chance to bring home...
Read more

The first modern PUVs in eastern Pangasinan were rolled out recently by the Tayug Pangasinan Transport Cooperative (TAPTRANSCO) as part of the government's transport...
Read more

The 2021 Santana: Built by Volkswagen, driven by You

The 2021 Santana packs the same features and amenities of previous models in an updated version of the 180 MPI AT S and the...
Read more