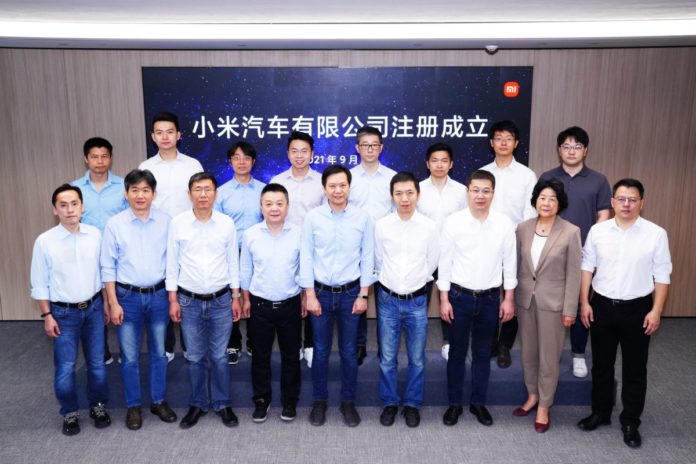 Xiaomi Corporation announced that Xiaomi EV, Inc. has completed the business registration with a registered capital of RMB 10 billion. Lei Jun, founder, chairman and CEO of Xiaomi, is the legal representative of Xiaomi EV, Inc. This marks a key milestone of the much anticipated smart electric vehicle (EV) initiative which has officially entered a substantial development phase.

Towards the end of March 2021, Lei Jun, the founder of Xiaomi, announced the company’s EV business initiative, committing to invest an estimated USD 10 billion in total in EV business over the course of the next 10 years, with an initial investment of RMB 10 billion. He himself will lead the team and stake his entire reputation on fighting for the EV business of Xiaomi. Now, Lei Jun has become the legal representative of Xiaomi EV, Inc. and he is leading the team to double down on the EV manufacturing to turn his promises into actions, showing his firm determination and faith.

Ever since Xiaomi announcing to launch the EV business, the company has become the hope to revitalize the automotive industry and a representative to innovate its potential development. On July 28th, Lei Jun recruited talents for Autonomous Department on Weibo. During the 2021 Q2 earnings call on August 25th, Wang Xiang, partner and president of Xiaomi, expressed that he felt the immense love from the automotive industry for Xiaomi as the company has received over 20,000 resumes. The Xiaomi EV team has carefully selected talents and formed a team of about 300 employees. The strong appeal of talent recruitment demonstrated that Xiaomi has become an emerging force that carries high expectations among the business insiders. As the team is still expanding rapidly, it welcomes more like-minded talented individuals to join.

During the 5 months from the announcement of the Xiaomi EV initiative to the official registration of the EV company, the Xiaomi EV team has conducted a massive amount of user research and industry chain inspections, with more than 2,000 interview surveys and visits to over 10 industry peers and partners, while pressing ahead with the EV product definition and team formation.

In addition, Xiaomi announced its acquisition of an autonomous driving technology company Deepmotion Tech on August 25th. This shows that the Group has started to focus on building automotive-related technologies and talents. There are 16,000 engineers at Xiaomi currently and its R&D expenses were nearly RMB 10 billion in 2020. This demonstrates Xiaomi’s capability and confidence in having a rich talent pool and technologies. Xiaomi’s technological advantages in artificial intelligence, new materials, and other fields will form a strong support for the automotive business.

In the meantime, Xiaomi reported record revenue and profit growth of the Group in the company’s 2021 Q2 earning results. In the second quarter of 2021, Xiaomi’s total revenue amounted to RMB87.8 billion, representing an increase of 64.0% year-over-year; adjusted net profit for the period was RMB6.3 billion, an increase of 87.4% year-over-year. The total revenue and the adjusted net profit both reached record highs in the quarter. Additionally, Xiaomi EV business has completed its rapid team building while invested heavily in the key technology of autonomous driving and officially registered Xiaomi EV, Inc. A number of achievements have proven that after 5 months of preparation, a better than ever Xiaomi is ready to embark on a new journey and the future performance of Xiaomi EV that is worthy of all expectations.