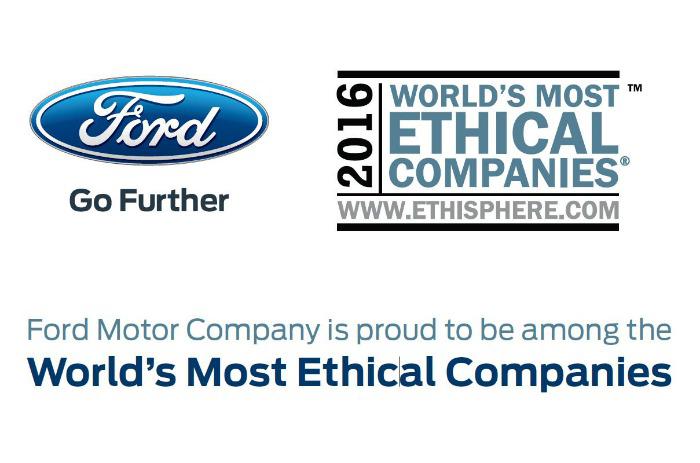 Ford Motor Company is the only automaker named a 2016 World’s Most Ethical Company® by Ethisphere Institute today – a distinction that comes as ethics in business increasingly affects customers and their purchase decisions.

“This honor celebrates our employees who are committed to doing the right things and making the right choices,” said Bill Ford, executive chairman, Ford Motor Company. “Ethics and corporate citizenship are the foundation of what drives us to make people’s lives better.”

This marks the seventh consecutive year Ethisphere Institute has named Ford a World’s Most Ethical Company.

Ethisphere Institute, a global leader in defining and advancing the standards of ethical business practices, honors companies with top ratings in five categories – ethics and compliance, corporate citizenship and responsibilities, culture of ethics, governance and leadership and reputation.

For decades, Ford has recognized the importance of strong corporate citizenship and how that ties to success and building the company’s reputation. More than half of respondents to the 2016 Harris Poll Reputation Quotient said they learn more about a company before deciding to do business with them. More than one-third decided not to do business with a company if they perceive the business has a negative reputation.

“Ford understands that trust is the cornerstone of everything it does, and their commitment to being an active part of a global community helps explain why they are the only automaker Ethisphere has recognized every year since 2010,” said Timothy Erblich, Ethisphere’s Chief Executive Officer. “Being honored for the seventh time is no small achievement. Congratulations to everyone at Ford for being recognized.”

In addition to this honor from Ethisphere Institute, Ford has received additional honors, including: