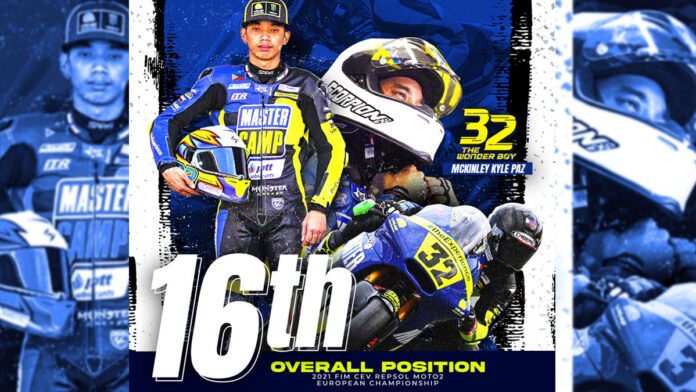 Kyle Paz of the Yamaha VR6 Mastercamp Racing Team started his 2021 Racing Season as the first ever Filipino to be part of the FIM CEV MOTO2 European championship, where he was eager to show the Filipino brand of racing to the world.

Entering the final round, the temperature in Valencia reached lows of 12 degrees Celsius. This proved to be part of the challenge for Kyle Paz aside from going against the top young riders in the world. He started on the grid at 21st and officially finished at 17th when the race was called due to a red flag. After joining the season from round 3 of the season, Kyle Paz finished 16th overall in the standing for a solid finish to his rookie year.

The 19-year-old was ready for the challenge and started his campaign in Circuit de Barcelona-Catalunya for round 3. He finished in 21st place for his maiden race. In round 5, Kyle had to overcome an injury he sustained to his pinky which proved troublesome in maintaining a grip with his left hand. He persevered and battled his way to tenth place. He showed his true potential in round 4 at Portugal where he had a season high of 7th Place.

The Wonderboy has come a long way from the racetracks of the Philippines to the circuits of Europe and carries the flag in every lap. The future of Philippine racing has arrived, Yamaha Motor Philippines will continue to support the journey of Kyle Paz and all the aspiring riders at home. Watch out for Kyle’s next milestone because his future will undoubtedly be astonishing.

Yamaha returns to the rough with off-road experience