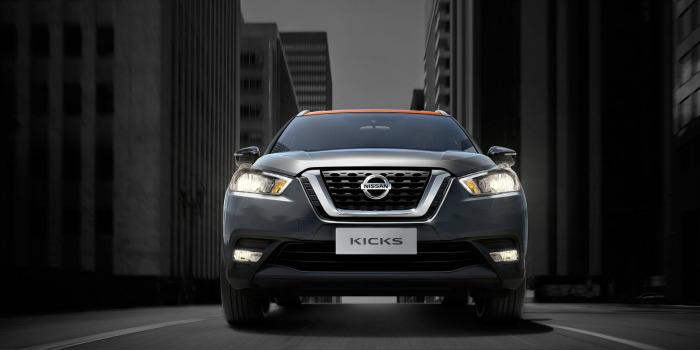 Nissan’s global leadership in the crossover segment will be further strengthened by the arrival of the all-new Nissan Kicks.

The production Nissan Kicks retains the basic design cues taken from the Kicks Concept – first shown at the Sao Paulo Motor Show in 2014 – and is a stylish crossover built for busy city-dwellers to tackle everything the city can throw at it.

To meet initial Brazilian demand, Kicks will be produced at Nissan’s benchmark plant in Aguascalientes, Mexico. Ramp-up to full production will start within FY16 at the Nissan facility in Resende, Rio de Janeiro – the site of a $192 million (R$750 million) investment to prepare for Kicks.

Kicks features established design signatures, such as Nissan’s V-motion grille, boomerang head and taillights, and the floating roof with a “wrap-around visor” look to the windscreen and side glass.

Inside, the story is one of quality and futuristic design in a cabin full of innovative features expected by a target audience who are technology hungry. The interior promises best in class passenger space in the rear – despite the coupé-like roofline – as well as one of the largest load areas in its class.

Among the other technology on-board, Kicks will feature Around View Monitor and Moving Object Detection, which use four on-board cameras to present a view of the car and to warn the driver of any unseen hazards. This is a segment first in the region and, taken together, offers a step on the road to Nissan Intelligent Mobility.

A sporting flavor is provided by the flat-bottom steering wheel, while the crossover stance provides a high eye point to give the driver an empowering viewpoint of the road ahead.

“With Kicks, we have developed a compact crossover in the best Nissan tradition, and thanks to the unmatched experience, we have in creating vehicles to meet the needs of car-buyers around the world,” said Keno Kato, corporate vice president, Product Planning, Nissan Motor Co., Ltd. “Kicks will offer best-in-class design, convenience and technological innovation. And, it will demonstrate Nissan’s commitment to Nissan Intelligent Mobility. Kicks is a car to confidently take on the city.”

Nissan Kicks sales will begin first in Brazil in August, followed by Latin American left-hand drive markets later in fiscal year 2016. And ultimately, it will be introduced in more than 80 global markets.

Full details of Kicks prices, specifications and equipment will be released closer to its on-sale date.