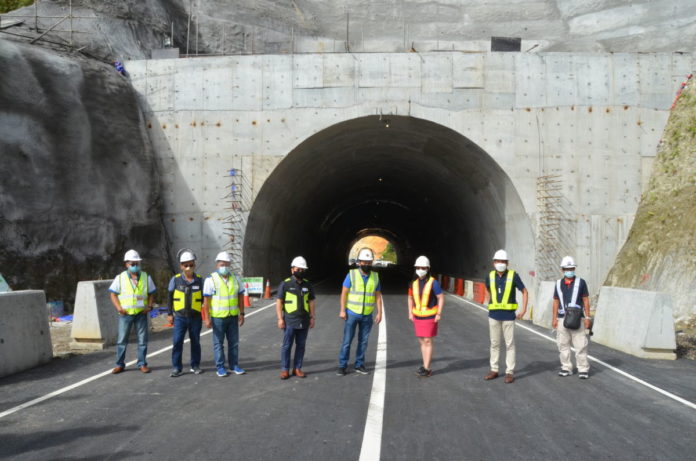 Starting December 28 and until January 15 next year, the new and expanded section of the 8.2-km Subic Freeport Expressway (SFEX) will be opened temporarily to serve motorists coming in and out of the Subic Bay Freeport Zone during the holiday season.

The new SFEX road, constructed beside the existing SFEX carriageway, will be available to motorists on December 28, 2020 until January 15, 2021 from 6:00 am to 6:00 pm. During this period, it will be closed from 6:01 pm to 5:59 am the next day for the continuing construction of remaining works.

“The project is 92 percent complete. While there are still works to be done in some areas, we are temporarily opening the new road to ease the travel of our motorists this holiday season, especially the truckers and merchants who are delivering essential goods,” said Secretary Villar.

The PHP 1.6-billion SFEX Capacity Expansion entails the conversion of the Subic Freeport Expressway to a 2×2 divided expressway, with the construction of two additional expressway lanes, two new bridges, and a new tunnel.  This will increase the road capacity of SFEX from one lane in each direction to two lanes in each direction.

The project also includes the installation of expressway-standard LED lights, the raising of elevation of Maritan Highway-Rizal Highway-Tipo Road junction, and the enhancement of the drainage system for better flood management in the area.

A series of road safety audits showed that the whole project alignment, except for the portion of Jadjad Bridge which is still under construction, has complied with the safety requirements thus safe for use by the motoring public.

Earlier, TRB and NLEX representatives led by TRB executive director Abraham Sales and NLEX vice president for Tollway Development and Engineering Nemesio Castillo, together with the Independent Certification Engineer, conducted a pre-opening inspection to ensure that the SFEX sections to be opened are safe for use by motorists.

The SFEX Capacity Expansion is envisioned to enhance accessibility and promote travel efficiency on this key road that connects Bataan and Zambales. It is also expected to boost Subic’s competitiveness as an ideal shipping gateway for businesses in Central and North Luzon.

“With the improved and expanded SFEX, the transport of goods in and out of the Subic Freeport will be faster and easier. Night driving will also be equally safe and enjoyable for our motorists,” said Bautista.

The Subic Freeport Expressway was built when the Philippines was chosen to host the APEC Economic Leaders’ Meeting in 1996. It initially aimed to cut down travel time from Hermosa, Bataan to Subic, Zambales from almost one hour to less than 10 minutes. With the capacity expansion project, more motorists will be accommodated at any given time and will  enjoy a safer and more convenient journey.

Pacific Global One Aviation (PG1), the aviation arm of PLDT, Inc., embarks on a major rebrand as it expects the global air charter business...
Read more