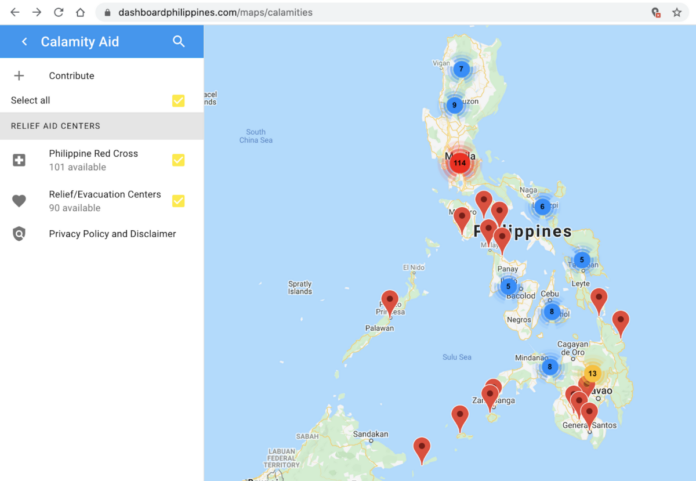 Google has collaborated with Dashboard Philippines, a non-profit, public service initiative, that is fully powered by volunteers who collect publicly available and trusted information. The data is organized in one dashboard to make it accessible and useful for the public for donations and tracking of evacuation centers, among others.

Google provided Dashboard Philippines with Google Maps API and Cloud API credits to run its public service web app at virtually no cost to both the developers and the public. This first led to a COVID-19 response initiative announced in April 2020 which mapped relevant information such as checkpoints, donation centers, open establishments, shuttles for essential workers, and hospitals that had available beds. The funding enabled the team to further enhance the service and build new features.
As part of the ongoing recovery efforts in line with Super Typhoon Rolly and Typhoon Ulysses, the volunteer-driven platform, in partnership with Google, has initially mapped the locations of the Philippine Red Cross Chapters, and the evacuation center locations in Metro Manila from the list publicly released by the Department of Social Welfare and Development. For the NGOs and other government agencies that aim to have their information mapped by Dashboard Philippines can write at [email protected]

Google.org, Google’s philanthropic arm, has also set up an internal Giving campaign where employees are encouraged to donate and it will be matched by the company. To date, in just two weeks, more than USD 63,500 (over PHP 3-million) has already been raised. Once final, the fund will go to the Center for Disaster Philanthropy (CDP), an intermediary organization that specializes in distributing donations to nonprofits that work in the affected country or region.

On top of this, Google launched a Holiday Giving Campaign providing each employee a USD 400 credit they can use to designate Google donations to qualified organizations, including: Coalition of Elderly, Mengal Women, and Humanility.Org. In addition, Googlers’ out-of-pocket donations will be matched by Google.

“The year 2020 has been extremely challenging for the country given the recent calamities on top of the ongoing pandemic. Our hearts go out to those impacted and we want to do our best to help through our technology, partnerships, and employee donation matching campaigns,” said Bernadette Nacario, Google Philippines country director.

The ongoing typhoon relief efforts map can be found at www.dashboardphilippines.com/maps/calamities.