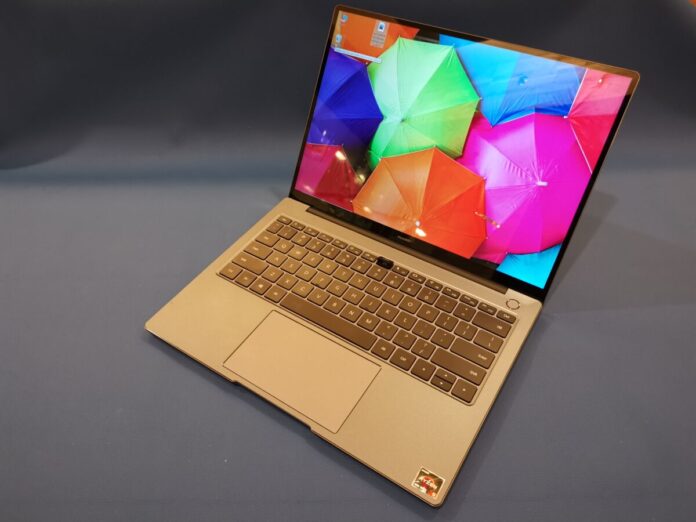 A change of scenery can do a lot to kick one’s creative brain into gear. For that to happen, you need a good laptop.

The MateBook 14 is clad in a matte gray metal shell with a very understated Huawei logo on the lid. The edges are smooth, and I never thought I’d say this about a laptop, but it’s actually really pleasant to hold. Cracking the device open reveals a gorgeous screen protected by glass and surrounded by wonderfully thin bezels on the top and sides, and the slightest chin at the bottom. There’s a power button on the top right corner, just above the black, backlit keyboard, and an absolutely massive trackpad just below the spacebar. There aren’t even any speaker grilles visible to wreck the lines.

The simple, elegant design language is something we see a lot of in laptops of late, and while Huawei does it exceptionally well, that’s not what makes the MateBook 14 stand out. Under the gorgeous metal and glass is a Ryzen 5 4600 processor—the same one that has been responsible for Ryzen’s meteoric rise to the top. The 3.0GHz processor is paired with 16GB of RAM, and 512GB of SSD storage. That’s a lot of power in a package that’s as impossibly thin and light as this. There’s even NFC for connecting your phone and casting the screen on the laptop live.

The display is a gorgeous 14-inch 2160 x 1440 deal with a 3:2 aspect ratio (more on that later). With 300 nits of brightness, low blue light, and a 178-degree viewing angle, it’s easy on the eyes, with bright, accurate colors for crisp images. It also has Radeon integrated graphics, so if you intend to do some gaming on the side, it’s actually going to be happy to oblige. The camera is cleverly hidden among the function keys as a pop-up button–one press and it pops into position with a satisfying little click. There are of course also built-in mics (four of them actually) that help with the whole virtual meeting/class situation we’re all in.

Right off the bat, I’m going to say I’m in love with the 3:2 aspect ratio. As a writer, this just makes long walls of text, and websites that much more correct-looking and for some reason, more pleasant to work on. One wouldn’t imagine the effect of such a seemingly minute detail to be drastic, but there’s something about the wasted space on the usual 16:9 that doesn’t happen on 3:2, and it just makes writing and reading better. I’m a believer now.

Being a journalist, I pay particular attention to the keyboard. I do understand compromises have to be made to get a device like this to be as thin and gorgeous as it looks–compromises like key travel. That being said, while the keys on the MateBook are shallow indeed, they offer a decent tactile bump at the end of travel, so you don’t hammer on the keys too hard. It’s not my favorite feeling, but I had no problem writing about 5000-6000 words in one sitting on it, so I can’t really complain. Honestly, that large trackpad takes away any ill feelings I had about the keyboard.

The camera is a cool implementation put in place to give the screen the super small bezels it has. In practice though, since it’s so low, I found myself having to raise the laptop on a stand to get a better view of my face. It’s not a big deal to be honest, and the quality was reported to be quite fine, it’s just that it shoots from a low POV. There are also only two USB ports, though you have an HDMI port, so it’s a bit of a mixed bag.

Performance-wise, let’s be honest here. I would be absolutely surprised if a laptop with specs like this had any trouble dealing with all the usual daily things an average user does. It did not disappoint. Meetings and presentations were completed smoothly. Because of the volume of work that has inexplicably appeared during this work from home era, there are times I’ve had all of 25 tabs open across three browser windows, along with a zoom meeting and a video in the background (yes, I do have an attention deficit disorder), and the MateBook 14 didn’t even break a sweat. This multitasking performance is a combination of what Ryzen is able to do, as well as the generous 16GB of RAM in there. Again, this isn’t a big gaming laptop, it’s a small, thin, light, very portable one. From that meeting, I switched over to Audacity to start editing a podcast, with the same number of windows open and no trouble at all.

Not even Overwatch, at perfectly acceptable medium settings could cause it problems. It was humming right along at upwards of 60 FPS, though the system temp did hit a concerning 90 degrees, with the fans going at full tilt. Overall though, very impressive considering gaming wasn’t at all what this little notebook was meant to do. Outside of gaming, I was able to squeeze out more than eight hours of battery life from the MateBook–extremely impressive given the size, and reasonably close to the claimed 10 hours. It also gets to 60 percent charge in an hour plugged in.

Huawei was also nice enough to send a nice bag that they claimed was the perfect match for the laptop, and I have to agree. The Huawei Classic Backpack, with its elegant nylon and leather construction goes excellently with the minimalist aesthetic of the MateBook 14. It has a dedicated laptop compartment that can be accessed without opening the top, leather and nylon construction, and either 8.5 or 11 L of space. It’s not a bad companion for your MateBook for PHP 5,999.

At PHP 54,999 this laptop is a great deal. Superb everyday performance, great design, and even some light gaming! Whether you’re a desk jockey or student, it’s a great pick—doubly so when we can start going outside, and its thin, light design can really shine.

The laptop is an indispensable tool in this era. Whether you’re working at home, and want to move around, or are already out and...
Read more

2020 has been, to say the least, rough for everyone. As Christmas is around the corner, consider Lenovo Think devices when you want to...
Read more

A change of scenery can do a lot to kick one’s creative brain into gear. For that to happen, you need a good laptop. DESIGN:...
Read more