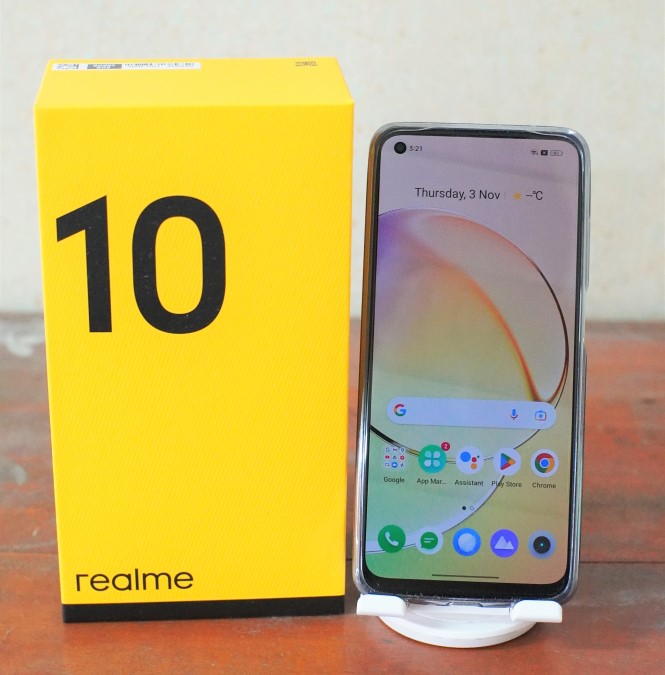 The realme 10 comes in two color designs, Clash White and Rush Black. Ours came in the Clash White variant, and, boy, does it look good.

The Clash White is more of a combination of three colors, orange yellow, blue, and a bit of violet in the middle — it resembles a rainbow with the color seamlessly shifting to another.

The realme 10’s display is a 6.4-inch FHD+ (1080 x 2400) super AMOLED. It has a 90Hz refresh rate and a 180Hz touch sampling. It’s also great to know that the display is Corning Gorilla Glass 5 giving you peace of mind in case you dropped it. While most phones are adopting the 120Hz refresh rate, 90Hz is still good enough.

The realme 10 looks similar to the earlier realme 9 smartphone. The only difference is the camera setup on the 10, which sports only a rear dual-camera setup instead of the 9’s triple. Like the realme 9, the realme 10’s selfie camera is located at the upper left corner of the display to enable a more immersive gaming experience.

On the phone’s left is the sim-card tray and microSD slot (expandable up to 1TB). On the right are the volume keys, and the power button that doubles as the fingerprint reader. At the top of the smartphone is just the microphone hole. At the bottom are the 3.5mm headphone jack, the USB-C charging port, another mic hole, and the single downward-firing speaker.

Inside the realme 10 is a MediaTek Helio G99 processor. While many would scoff at a MediaTek processor, the Helio G99 is an upgrade from the realme 9’s Snapdragon 680. The processor is mated to a Mali-G57 MC2. Our review unit also had 8GB of RAM and 256GB of internal storage.

As mentioned earlier, the storage is upgradeable up to 1TB via a MicroSD card. The RAM can also increase up to 5GB via realme’s Dynamic RAM Expansion, which uses a bit of the internal storage.

There’s no 5G connectivity, so bear that in mind if you’re considering this phone.

It scored 395851 in Antutu V9.5, 565 in Geekbench single core, and 1748 in multi-core. In the real world, the processor was great for multitasking and gaming. It can run esports titles like League of Legends: Wild Rift at the highest settings without dropping frames. The processor is also powerful enough to run heavy titles like Genshin Impact with no problem.

The realme 10 has a dual-camera setup consisting of a 50-megapixel Color AI camera and a secondary 2-megapixel Black and White lens for better portraits. Despite the smaller megapixel count compared to the realme 9’s shooter, the realme 10 produces equal, sometimes better, and sharper images. The selfie camera is a 16-megapixel shooter, which looks good, especially in the natural mode.

Here are some sample shots using the realme 10:

In terms of video, the realme 10 can only shoot up to 1080p with 60fps. I think this is a letdown considering how many devices now support 4K 30 fps and how good the camera was. Another thing you need to know is that the dual camera lacks an ultra-wide angle lens, but I honestly don’t think that’s an issue with how wide the main camera is.

As for the battery, the realme 10 has a 5000mAh battery that support’s the brand’s 33W SuperVOOC charging. According to realme, it can charge the device from 0% to 50% in just under 30-minutes. While I have yet to test that claim, I did find the optimized night charging to be the highlight of the battery. Optimized night charging allows you to plug the device in at night and it will slow-charge, only fully charging the device just before you wake up.

The realme 10 runs on realme’s realme UI 3.0 on Android 12. It has been a while since I last reviewed a realme device and I was disappointed by the number of bloatware now included. Thankfully these can be uninstalled, but that process will take some time.

That said, the phone is an excellent media-consumption machine. The super AMOLED display makes for some enjoyable Netflix-binge sessions. What is even more impressive is the speaker. Despite being a single downward-firing speaker, it is able to produce loud and good-quality audio, enough to fill a small room.

For gaming, I was able to play Wild Rift consistently without the phone dropping frames or getting hot. When I played Genshin Impact, the phone did get warm but never to the point of concern.

Battery life was great too, it lasted me a whole day of somewhat moderate use. It was able to last me a whole day without any need for a power bank. I also noticed that despite a two-hour anime binge on Netlfix, the phone only consumed around 5 to 10% battery, so you can expect it to last a whole day of binge-watching during the weekends.