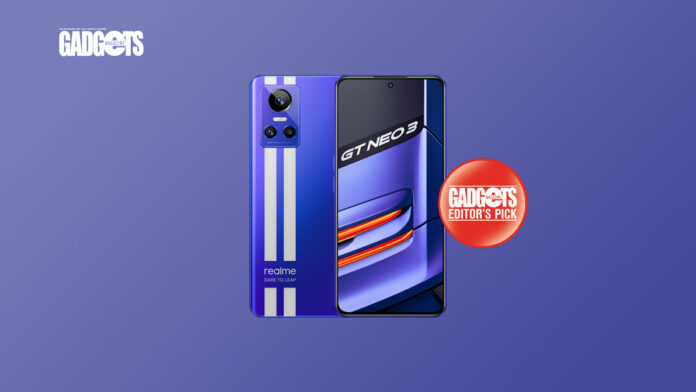 With the Neo GT, realme never fails to surprise us with their new upgrades, always improving their technology to cater to consumer needs especially in this fast-paced world that we’re living in. The realme Neo GT is a smartphone with a sleek design and performance that does not disappoint.

realme devices usually come in a bright yellow box. The Neo GT 3, however, comes in a black box with a holographic print of the realme logo. The unit is in Nitro Blue, an almost purple hue with a metallic finish. It also has two white stripes that resemble the iconic Ford GT40 — personally, this is my favorite design from realme so far. The phone is packaged with the user manual and warranty, a silicon case, an ejector pin, and a USB-C cable with an adaptor. No earphones are included, as the phone does not have a 3.5mm jack.

The realme Neo GT has a 6.7” AMOLED Display that includes 1B colors and HDR10+ that enhances the colors and contrast of photos and videos.

The Neo GT is powered by a MediaTek Dimensity 8100 for powerful performance. It runs on Android 12 and realme UI V3 operating systems, and has a high refresh rate of 120Hz. It has expandable 8GB RAM, and although it doesn’t have a dedicated card slot, the internal storage capacity is a whopping 256GB. It has a triple main camera with the flagship Sony IMX766 50MP wide, 8MP ultrawide, and 2MP macro that can capture 4K resolution videos at either 30fps or 60fps. The 16MP front camera captures 1080p videos at 30fps or 60fps. It has a 5000mAh battery with an 80W SuperDart fast charger.

Since its release, I had been looking forward to testing the realme GT Neo, so I was excited to receive the review unit. As mentioned earlier, I’m a big fan of its simple design, and the addition of two stripes seemed a smart way of showcasing the phone’s performance.

Starting with the camera, the Sony IMX766 really played a big role in its primary 50MP. Photos in low-light settings produced promising results, with details enhanced, accurate colors, and minimal pixelation. I thoroughly enjoyed taking nighttime cityscapes at locations with neon lights, as the resulting photos had a cinematic vibe. In brighter settings, the images produced were vivid, had accurate colors and sharper details. The images were high-resolution even without using the HDR feature.

Next up is its performance. I always test smartphone performance on fast-paced mobile games with massive storage requirements. Also, I always play the same games – Call of Duty Mobile and League of Legends: Wild Rift, and Apex Legends Mobile. Honestly, I think this is where the GT Neo 3 chipset really flaunted its performance. The graphics were high-resolution even in low to medium settings and ran the game at 60 to 90fps. The colors weren’t washed out compared to other android smartphones. Gameplay was seamless, and thanks to the Game Toolkit (GTK), I had the freedom to customize and manage the settings to achieve a much better gaming experience. On GT mode that boosts phone settings while gaming, it did heat up momentarily but cooled down almost immediately.

Consuming media is very pleasant, especially for watching videos and playing games. The audio is sharp, and although the bass is not as good, the sound quality is still quite impressive.

The GT Neo 3 has a 5000mAh battery. The video playback lasted almost 20 hours, which really wowed me. You could go for a day without having to worry about the battery dying. The 80W SuperDart fast charger is able to deliver a full charge in under an hour. I did encounter a minor issue once when it stopped charging at 80%.

Priced at PHP29,000, the realme GT Neo 3 is a good investment, as its battery life is promising, while its camera and performance are top tier.

The realme GT Neo is perfect for gaming and media consumption.