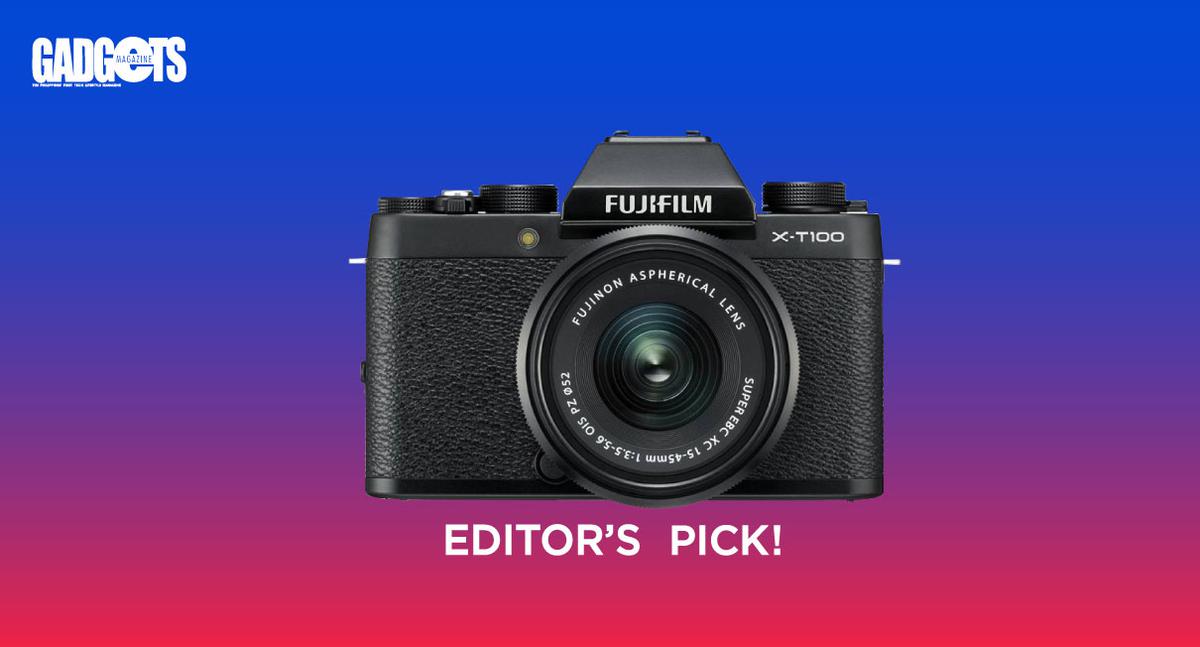 As various smartphone manufacturers develop sophisticated phone cameras, and prices for mirrorless cameras increase, consumers are having a hard time finding a device that is both compact and reasonably priced. Fujifilm’s latest entry-level camera, the X-T100, has found its niche for those who would like to upgrade their photography skills with a dedicated snapper. Is it a hit or a miss? Let’s find out.

Light, handy, and stylish: these are the words that perfectly describe the Fujifilm X-T100. It gives the same premium vibe that the previous X-series had, thanks to its anodized aluminum top cover. Its solid, textured body in black with champagne gold accents adds to the retro design of the camera, and sets it apart from other models of the same class. For better handling, it comes with a detachable grip.

Keeping with the signature form of Fujifilm, the controls and dials are neatly placed on top of the camera’s body. It has a new function dial that allows users to customize and assign shortcuts like film simulation, and a hotshoe that provides connection of other camera accessories. Basic buttons for power, function (Fn), shutter, and video recording can be found on the top right part of the camera. On its left lies the 2.5mm audio jack for microphones, while the HDMI (Type D) and micro-USB ports are on the opposite side. There’s also a pop-up flash up front and a 3.2-inch touch screen monitor that you can flip vertically and tilt up and down.

Just like its predecessor, the X-A5, Fuji has integrated a 24.2-megapixel APS-C CMOS sensor that is equipped with a phase detection autofocus system for accurate shooting. It supports 4K videos in 30-minute clips, and Full-HD videos up to 60 fps.

For more fluid zooming and focusing, the mirrorless camera is paired with the XC15-45mm f/3.5 – 5.6 which happens to be the brand’s first motorized X Mount lens. This also makes the device compatible to other zoom and prime lenses from the said lineup. Giving you a clearer view of the subject that you’re about to shoot, another new feature that it boasts is the 2.36-million dot resolution electronic viewfinder.

In terms of connectivity, the X-T100 provides a wide array of options. It supports Wi-Fi and Bluetooth connectivity which are great for sharing photos to other devices and over the Internet. There’s also HDMI and USB ports for those who prefer wired connections.

I really love how Fujifilm made the X-T100 compact and lightweight. As a photography enthusiast who travels often, I’ve always wanted to have a capable camera that’s less bulky in my bag. The X-T100 has both boxes ticked. Unlike many models that I hadhandled before, adjusting the settings in manual mode in this camera is easy. You have the option to customize buttons and navigate through menus through the dials or right on the display. Delivering performance akin to a professional-grade camera, it produces photos with rich details and accurate colors from its large camera sensor. It has an extended output sensitivity that can stretch up to ISO 51200 which is perfect for taking photos in lowlight conditions. The rear display has a good level of clarity, although not quite as slick as those found on most
smartphones.

Equipped with a hybrid autofocus system that offers a variety of focus patterns, the camera allows beginners to point and shoot subjects in different scenes. For example, the Zone AF specifically tells which area your subject is in while the Single Point AF mode enables you to select focus on a particular area on the frame. There’s also a handy eye-detection AF mode that focuses on the eyes of portrait subjects. However, it isn’t the quickest and isn’t best suited for moving subjects. Getting used on the touch screen autofocus can also take you some time. For those who are used to manual zooming and focusing, the motorized lens may prove to be quite a different experience. It’s great for video capture, but not as useful for photography.

In terms of battery life, the camera lasts longer than I expected. I was able to shoot photos and record short video clips for a total of 8 and a half hours on a single charge. Should you need an additional kick of power, you can plug it into a power bank or a car’s USB port.

On the other hand, the videos look a bit lackluster compared to the photos. To compensate, it delivers solid frame rates when in full HD mode and excellent footage under proper lighting. As with other Fujifilm cameras, the X-T100 has film simulation presets that carry Fuji’s legendary film stock which gives every photo added character.

Meant to be an entry-level camera for Fujifim’s mirrorless series, the X-T100 has a plethora of features and presets that will not disappoint novice and even more serious photographers.

Shelling out less than PHP 40,000 is probably a good decision for those who want to upgrade their photography skills.

It’s a bang for the buck mirrorless camera that casual photographers dream of.