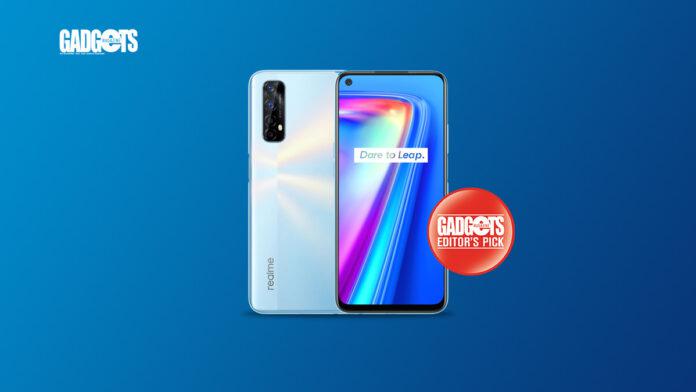 Smartphone manufacturers haven’t slowed down in producing devices that give exceptional value for money. Of those manufacturers, realme continues to stand out by continuously delivering phones that give exactly what users want, without unnecessary extras that inflate the price. It’s a winning strategy that has served them well, and continues with the latest in their stable, the realme 7.

The realme 7 is a phone that looks much more premium than its price tier might make you believe. The front of the device is dominated by a large 6.5.-inch IPS display with pleasantly thin bezels, and a slight chin at the bottom. To cut production costs, the glass is flat (which I vastly prefer for greater usability), and the display has a small punch-hole camera at the top left corner.

The edges of the device are populated with the SIM card tray and volume buttons on the left, the power button with integrated fingerprint scanner on the right, and the speakers, headphone jack, and USB-C port at the bottom. All the edges are nicely rounded, but quite slippery thanks to the fine matte surface treatment that wraps around the rear and sides.

The back of the phone has a curious, almost iridescent sheen to it, and is broken up by a band that spans the last sixth of the rear, cutting through the camera module. The camera cluster houses four lenses and the flash in a rounded rectangular bump that sticks out quite significantly from the rest of the phone’s back. Aside from that, there’s just a bit of subtle branding at the bottom left corner, just so you don’t forget.

Making the realme 7 tick is a Mediatek Helio G95—one of the new SoCs from the manufacturer that’s designed for higher-end 4G gaming devices. It’s a great choice that delivers great performance, without breaking the bank, so it’s no surprise that realme went this route. This is backed by 8GB of RAM, and the equally fast Mali-G67 MC4 GPU. this is a great combination of CPU and GPU that clearly has a slant towards gaming. To further push the gaming agenda, Realme has included a 90 Hz display, for smoother-than-average visuals. 128GB of storage rounds the whole package out nicely.

Another ace up realme’s sleeve is super-fast 30W charging for its already large 5000 mAh internal battery. More on that later.

Coming off the success of the previous realme 6 series of devices, I had quite high hopes for this device. Cosmetically, the more toned-down blue-gray sheen of the back is extremely pleasing, as is the little asymmetrical band they put on there. It’s smooth, with the slightest bit of texture, and while you’ll probably want to put in in a case to protect the prominent camera bump, you’re going to have second thoughts thanks to that nice, if slippery, finish they gave the phone.

Waking the phone from sleep is impressively fast with the fingerprint scanner under the power button. In fact, the fingerprint recognition was so fast, the phone would unlock the moment my finger hit the button, completely removing the need to give it a press. Once awake, the phone is fast, scrolling through my endless list of apps with no trouble at all, and launching each at a pace that gave my personal flagship device reason to be a little concerned.

Call of Duty: Mobile played flawlessly. While I’m far from pro-level, I’m decently good to the point that even minor stutters are more than a small annoyance. After 90 minutes, the phone did get expectedly warm, but unless I kept my whole palm flat on the back of the phone, it wasn’t hot enough to be uncomfortable.

To test the 90Hz refresh rate on the display, I loaded a familiar, compatible title, Alto’s Adventure, and had my wife play. Even as an observer, I noticed that the game was actually smoother, and my wife agreed. Frames win games, and now, you can get that advantage on your phone.

With all the playing I did and just the factory charge to run on, I eventually managed to drain the battery pretty low. From a totally flat battery and a dead phone, I plugged in, and timed 30 minutes. Once that time was up, I booted up again, and saw that the phone had managed to get a 62 percent charge. Very impressive.

As for the camera, outdoors in bright light was no challenge for the Sony sensor that is the heart of the system. Photos are a step up from the previous incarnation of the phone, with more vivid colors, and just a bit more detail. Low light performance was equally impressive. With little detail lost even when zoomed into an indoor shot of a backlit keyboard, in poor light. The camera and software balanced the bright and dark areas nicely, without muddying up the image, or blowing out brighter spots. Again, very impressive.

With a sticker price of PHP 14,990 for the 8GB RAM + 128GB storage version, this is a steal if I ever saw one. In choosing the correct things to focus on, compromise with, and balance, we have a phone that does the important things well, and doesn’t sweat the admittedly fancier, but otherwise “extra” features. A winner all around, unless maybe you’re the other brands.

Realme has done it again, strengthening their position as a great value brand.