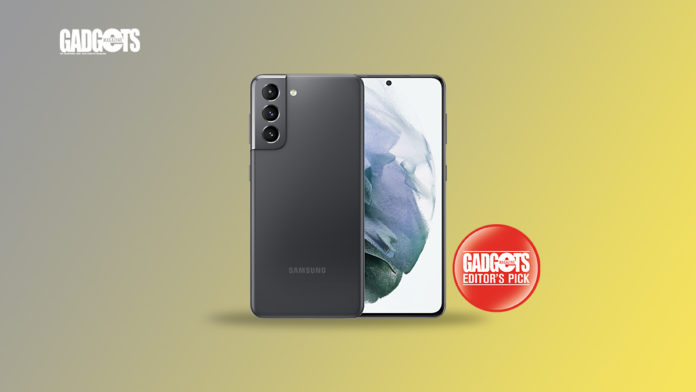 The Samsung Galaxy S21-series is the best-looking Samsung phone yet. That camera layout at the back just looks so good. I have to admit, before seeing the phone firsthand, I thought that the camera hump would be obnoxious because the photos do make it look bigger. Now holding the phone, I can say that Samsung’s designers have done their jobs well; the hump wasn’t really an issue, and the whole phone is just felt premium despite reserving the glass back for the Ultra model.

The screen of the Galaxy S21 5G is a 6.2-inch FHD+ Dynamic AMOLED display that goes up to a 120 Hz refresh rate. At the front, you can find the selfie camera and the forward-facing speakers; at the back is the main camera setup. On the right side are the volume buttons and power button, on top are two microphones holes, and the bottom is the USB Type-C port, the sim card tray, another mic hole, and of course, the downward-firing speaker.

The Samsung Galaxy S21 5G is equipped with Samsung’s newest Exynos 2100 processor with Mali-G78 graphics. The processor scored a 3022 in GeekBench 5.3.2 multicore and an 816 for single core. On the graphics side of things, the combo scored an impressive 5745 points in 3DMark Wild Life.

Our review unit had 8GB of RAM and 128GB of internal storage. Like the last few Samsung Galaxy S-series and Note-series, the S21 5G does not have expandable storage, and you’ll want to check your memory space every so often.

Undoubtedly, the best feature of the phone is its cameras. It has a triple main camera setup with a 12-megapixel wide-angle, another 12-megapixel ultra-wide angle, and finally, a 64-megapixel telephoto that has a 3x hybrid zoom. The cameras can also shoot at 8K. The front is a 10-megapixel shooter.

For battery, it has a 4000mAh battery which lasted me a day of full use, but you can fully charge it in just under 2 hours using a non-fast charging charger. The phone does have NFC and Wireless charging rated for up to 15W fast charging. At the same time, the phone itself can fast charge up to 25W.

Going to the phone itself, Samsung did a job well done in making the phone every bit as exciting as their previous flagships.

One of the biggest features of the Galaxy S21 5G is its cameras. The phone was able to capture great images in various conditions; some even came out better than a DSLR. Like previously tested phones, I used our in-house model/ cat Butterscotch and looked at how the phone handled fur. To no one’s surprise, it did it really well in distinguishing her fur from the background.

But the most important feature of the camera is its 30x digital zoom. I was able to capture readable texts from a faraway object with no problem. Another great feature that I loved was the phone’s great stabilization. The phone gave an almost gimbal-like smooth stabilization to videos I took, even while I was walking.

The Samsung Galaxy S21 5G isn’t just a camera-centric phone. One of the biggest upgrades of this from older Samsung flagships is its productivity features like Wireless DeX and optimized linking to Windows devices.

Aside from those, I enjoyed using the Samsung Galaxy S21 5G as my go-to media device. From watching Netflix, enjoying music with its loudspeakers, and of course, playing games. The Exynos processor was surprisingly great for gaming, giving me about 30 to 60fps in Genshin Impact in High settings and Ultra Graphics setting in Mobile Legends.

One thing to note is that the device does get warm during long gaming sessions. It’s not painfully hot, but it is noticeable. Another thing is that the phone’s screen is no longer a 1440p one, but for most who’ll upgrade from a two to three-year-old phone, this one’s a non-issue.

The Galaxy S21 5G is also the smallest in the series, but for me, it might be the right size. You can use it with one hand, and it can fit in most pockets.

Samsung has produced another great, no frills, flagship in the Galaxy S21 5G.