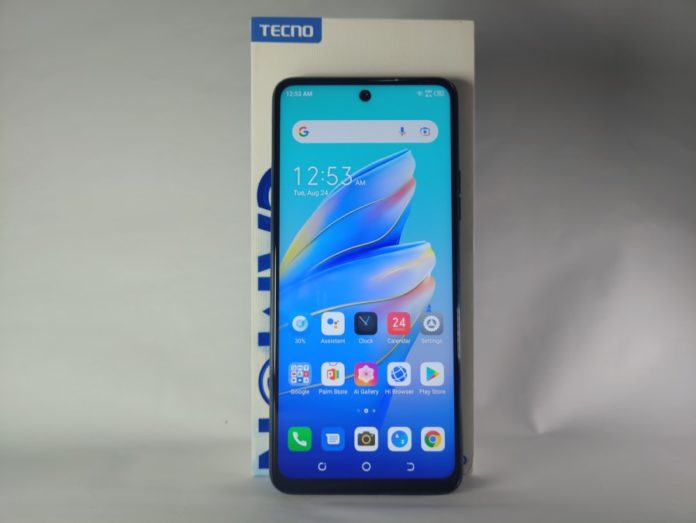 When I reviewed the Tecno Camon 16 Pro a few months back, I was very pleasantly surprised. It is a bang for your buck phone with great camera capabilities. Now its newer sibling, the Camon 17 Pro looks to carry out what its brother has started.

I have to hand it to Tecno, they really upped the ante on the looks of the Camon 17 Pro. It feels and looks like a premium device. Our review unit came in the Malibu Blue color, which looks more like a darker shade of green than blue, to be honest.

On touch, the back feels smooth like glass, without a textured finish but still offering a nice grip. Although matte, it is still a bit of a fingerprint magnet, but there’s a rubber case for that. A closer look at the back reveals a dot pattern that adds a layer to its looks.

In front is the 6.8-inch Dot-in FHD+ display with a 90Hz refresh rate and the 48-megapixel selfie camera. Above that is the earpiece which doubles as a speaker. At the back is the phone’s 64-megapixel quad camera setup. There’s not much on top except a mic hole, on the left is the sim-tray and micro-SD slot while on the right is the side-mounted fingerprint reader which doubles as the power button, and the volume buttons. Lastly, on the bottom is the bottom-firing speaker, the USB-C port, another mic hole, and the headphone jack.

Powering the Tecno Camon 17 Pro is the MediaTek Helio G95, MediaTek’s most powerful Helio-series processor. Our unit had 8GB of RAM and 128GB of external storage which can be expanded via the dedicated MicroSD slot. It has a 5000mAh battery with 33W fast charging.

As part of the Tecno Camon Series of smartphones, the Camon 17 Pro has a pretty good 64-megapixel quad-camera setup. The main shooter of course is the 64-megapixel f/1.8 lens paired with an 8-megapixel ultrawide camera, a 2-megapixel Bokeh/ depth lens, and a 2-megapixel black and white sensor. Tecno has also added special attention to the selfie camera, equipping it with a 48-megapixel shooter.

The underrated highlight of the Camon 17 Pro is undoubtedly the Helio G95 processor. Though not the fastest in the market and without 5G, it is still a pretty capable processor in the mid-range division. It scored a respectable 356921 in Antutu V9, which does translate to good performance.

Playing games on the Camon 17 Pro can be a mixed bag. Esports titles like Mobile Legends: Bang Bang and League of Legends: Wild Rift were able to run at the highest settings (Ultra with 60fps). I was also able to get pretty good results with Asphalt 9 running on a high setting although there were noticeable frame drops.

As for the heaviest game, Genshin Impact, I was able to run it at 30fps but at the lowest settings — not the greatest experience. Though I have to commend Tecno for its internal cooling as the device didn’t really get that hot.

Another game that had a bit of difficulty was Apex Legends Mobile. The game is still in its beta testing stage and probably wasn’t optimized for the Helio G95 or for the Camon 17 Pro.

Now for the Camon 17 Pro’s bread and butter, its camera. The camera is pretty good for both outdoor and some indoor scenarios. The Camon 17 Pro’s camera was able to handle complicated subject portraits (like my cat Butterscotch, my default model) even indoors. For outdoor shots, it is not flagship-grade but still among the best for its class. I was also surprised with the good details from the Ultrawide camera, which is usually where some brands skimp on.

Another feature I found pretty useful is the phone’s Ultra Steady electronic stabilization for video. It works, but the autofocus of the camera does tend to refocus the scene a lot if you’re walking without a subject.

As for media, the 90Hz refresh rate is pretty good for scrolling through social media. The dual speakers (the earpiece and downward speaker) are great to see/hear for a device at this price point.

The 33W fast charging is also a good addition, giving me full juice in just around two hours of downtime.

My only qualms (again) would be HiOS’s bloatware and Ads. You can disable these in the setting and uninstall apps, just a bit of a hassle to have to do all that.

Coming in at PHP9,990 for the 8GB + 128GB model, the Camon 17 Pro is definitely another hit for Tecno. It has a great mid-range processor, a pretty good screen, and of course, the great Camon-series camera.

The Camon 17 Pro is definitely another hit from Tecno.