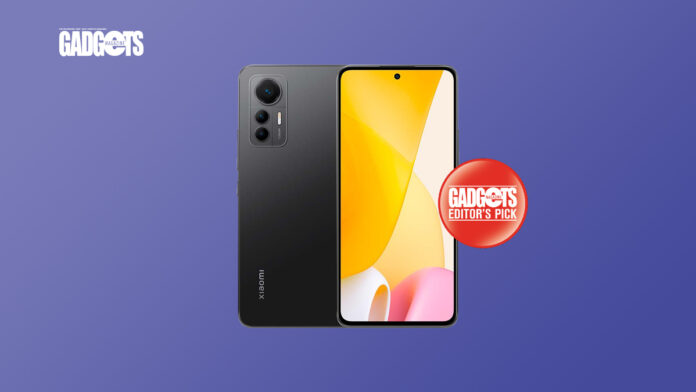 The Xiaomi 12 Lite is similar to its predecessors in more ways than one. It carries the Xiaomi 12-series’ gorgeous camera layout and retains the Xiaomi 11 Lite NE’s boxy design.

You’ll immediately notice how sleek and lightweight the phone is. It comes at a mere 173g and is 7.29mm thin. I have to say that while I am not a fan of boxy phones (they’re a pain to hold for a long time), the sleek and light body of the Xiaomi 12 Lite makes it a joy to use.

The Xiaomi 12 Lite is available in three color variants: Lite Pink, Lite Green, and Black. Our review unit came in the black colorway, which I loved because of its simple yet classy look.

Once you open the phone, you’ll immediately notice the 6.55-inch AMOLED display. The display has HDR10+ and Dolby Vision support as well as up to 120Hz refresh rate. There’s also an in-display fingerprint reader beneath the glass.

I had doubts about the 778G, as it is the exact same chip in the Xiaomi 11 Lite NE. The chip is already a year old. But I was pleasantly surprised at how well it performed. It wasn’t the fastest, but it still had the power to get the job done and with room to spare, especially in gaming (more on that later)

Where the Xiaomi 12 Lite truly shines is at its shooters. The phone is equipped with a 108-megapixel main camera, an 8-megapixel ultra-wide, and a 2-megapixel macro lens. The primary camera takes excellent shots both in the daylight and even in low-light situations.

For video, the Xiaomi 12 Lite is adequate. It can capture 4K videos at 30fps and FHD at up to 60fps. The video quality is not the greatest, but usable. There is built-in EIS limited to 1080p 30 fps. If you want to shoot in 4K, you’ll need a gimbal or tripod to keep it steady.

There are also some great video features like the Vlog mode where you can shoot clips, and the phone can edit it out for you as a mini vlog for your gram.

Then there’s the upgraded 32-megapixel selfie camera. Xiaomi has added some pretty neat bells and whistles on the selfie camera, including an upgraded auto-HDR and a new Xiaomi Glow lighting which consists of two LED lights lighting up on the front of the phone.

I was excited about the Xiaomi 12 Lite yet, at the same time, a bit skeptical. The Xiaomi 11 Lite NE is a good mid-ranger, while the Xiaomi 12-series is a great phone overall. I was wondering how a repeat of the 778G would affect the phone’s performance. I am happy to report that it is still a great phone.

As I said earlier, the phone still has a good power performance. It was able to handle everything I threw at it, even hard-hitting games like Genshin Impact. In fact, it was able to run Genshin at high graphic settings at around 40-ish fps. While it did drop a few frames now and then, you could play the game without any issue. For lighter games like League of Legends: Wild Rift, it just crushed it with no problems.

Another thing that impressed me was the display. The brightness is excellent, with good readability even under direct sunlight. It also has Dolby Vision which makes Netflix bingeing a joy. The 120Hz adaptive refresh rate was a great help during my long Wild Rift gaming sessions on the device. Speaking of media, the speakers also exceeded expectations, delivering audio loud enough to fill a room.

Finally, the battery. The 4300mAh battery was enough to give me a whole day of use — gaming with a bit of photography. The included 67W charger was able to fully charge the phone from 13 percent to 50 percent in around 10-minutes, enough to last for half a day.

A definite contender for mid-ranger of the year.