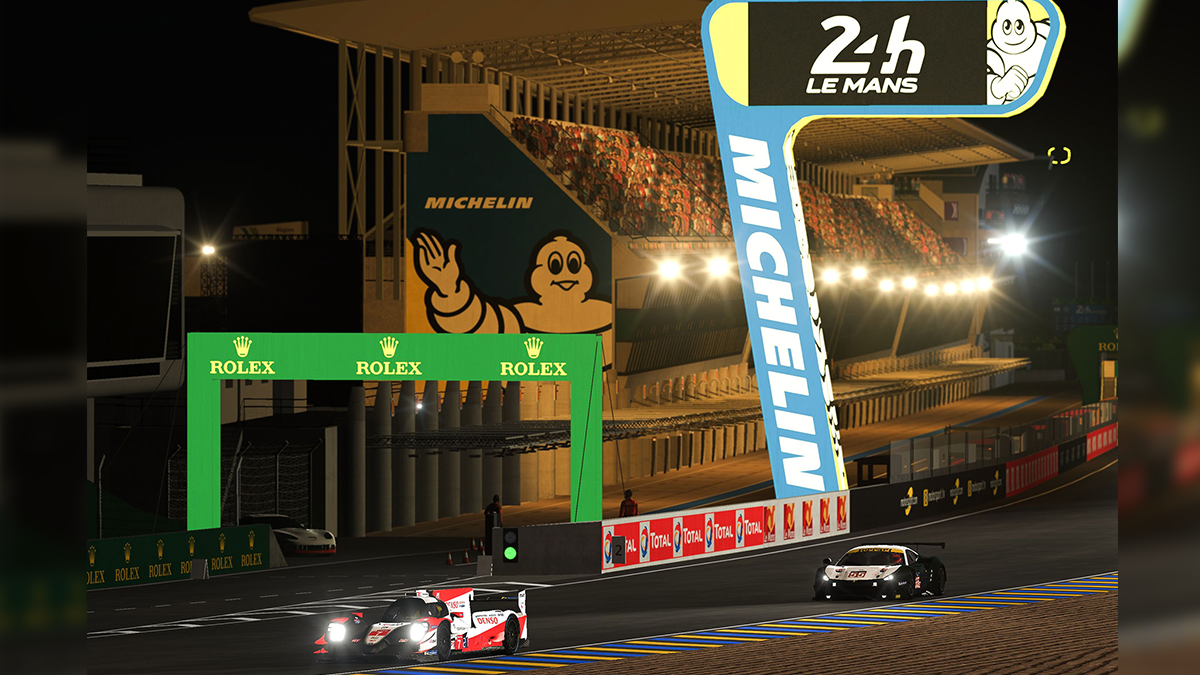 The GTE class was won by Porsche Esports Team which emerged as the category’s dominant squad in qualifying. The top prize was secured by the No. 93 Porsche 911 RSR, thanks to a surefooted performance. Interestingly, British driver Nick Tandy can now claim to have won Le Mans’ GTE class with Porsche and Michelin in both the real world and ‘virtually’. Second in class went to the No. 95 Aston Martin, while R8G Esports Team’s No. 80 Corvette took third.

All these cars contested the race on ‘virtual’ Michelin tires.

Not only did the realism of the rFactor2 software employed for the inaugural Le Mans 24 Hours Virtual provide endurance racing fans with a welcome chance to enjoy their favourite discipline once more after the recent halt to real-world motorsport, but it also gave video game fans an opportunity to discover motor racing from a fresh perspective that introduced them to the important role that tires play in motorsport.

Buoyed by a field of 50 cars and 200 topflight racing drivers and sim racers, the show provided by the inaugural Le Mans 24 Hours Virtual lived up every bit to its promise. Drivers from different forms of racing and top names from the world of endurance racing teamed up with a line-up of sim racing stars to showcase their professionalism not only during their respective pre-race preparations but also in the course of the twice-around-the-clock race itself. The result was a gripping fight between the successive leaders who all chose similar race strategies and the gaps at the end were extremely close.

As expected, the teams with the strongest reputations took turns in front and took the two ‘virtual’ red-flag interruptions that bunched up the field in their stride. Thanks to the quality of the coverage and the work put into the event by its organiser, the ACO (Automobile Club de l’Ouest), it was easy to forget at times that this wasn’t actually the real thing.

“The inaugural Le Mans 24 Hours Virtual was a resounding success”

“There is always room for improvement, but I would like to thank everyone at Michelin Motorsport, as well as all the staff at the ACO and the FIA World Endurance Championship who put so much effort into this project. Michelin’s business is advancing continuously on the digital front and we are delighted today to have had this opportunity to reach out to a new audience thanks to the Le Mans 24 Hours Virtual,” says Michelin motorsport director Matthieu Bonardel.

An even more detailed understanding of ‘virtual’ tires

The drivers were swift to acclaim Michelin’s tires after qualifying and their praise continued during the race as they paid tribute to the realism of the feedback replicated via the steering wheel, and notably the difference between the feeling of the different compound options. As in  the real Le Mans 24 Hours, their strategies were based on the use of either hard or medium tires during the early stages of the race, before switching to the softer option for the cooler hours of darkness. On Sunday morning, as the temperature started to climb to exceed 20°C again, they returned to the medium compound, and then the hard tire.

In contrast to the real Le Mans 24 Hours, however, where multi-stinting the same set of tires is commonplace, this tactic wasn’t a feature of the virtual race. This was due on the one hand to the fact that the teams didn’t have a maximum allocation of tires for the race, whereas numbers are capped in the real world. On the other, the simulated time allowed for tire changes was relatively short, so there was little to gain from staying on the same rubber for more than one stint. Meanwhile, the wear-rates factored in by the software were higher than in reality. The game effectively reproduced a cost of two seconds per lap (one stint equivalent to approximately 10 laps) due to wear, whereas—in reality—Michelin’s tires deliver consistent lap times from the start to the end of runs of up to four stints at a time. Michelin hopes to be able to work with the rFactor2 platform’s designers so that competing teams have a broader spectrum of possible strategies in the future while demonstrating the consistency of its tires’ performance more fully.

A resounding worldwide success and new contacts for Michelin

Given that the Le Mans 24 Hours Virtual allowed motor racing enthusiasts to enjoy the action in the virtual company of video game fans who often have little interest in real motorsport, Michelin saw its involvement in the race as a chance to reach out to a wider audience which was able to discover the importance of the role played by tires not only in real life racing but also, by extrapolation, on their road cars. The quality of the race’s video coverage kept millions of fans captivated across the world, with viewing figures boosted by Michelin’s own social media teams who provided live streaming of the race on Michelin and Michelin Motorsport’s Facebook pages in 30 countries. Meanwhile, the teaser video posted by the French firm ahead of the race attracted by 1.3 million views on Instagram alone, plus another 450,000 on YouTube and 155,000 on Facebook.

Michelin’s involvement in the inaugural Le Mans 24 Hours Virtual asserts its commitment to eSports and, in September, it will be looking to follow up by extending its current unbeaten record in the real race to 23 victories in a row since 1998.

Suzuki extends April promos until May 2021