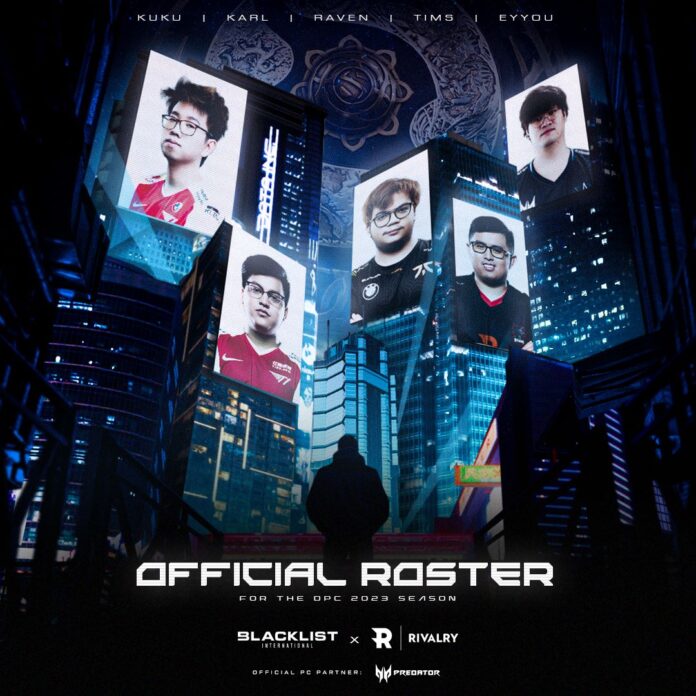 After solidifying their position in Mobile Legends: Bang Bang as a global esports giant, Tier One Entertainment and Blacklist International are finally expanding to Dota 2 in partnership with Predator Gaming. Blacklist Dota 2 is here and the team has some of the best Filipino talents on its roster as it vies for international acclaim in the highly competitive esports landscape.

“Tier One has always believed that talents in South East Asia are capable of competing globally regardless of which country. However, we opted to go for a full Filipino squad because we also believe in the value of communication in a team game like DOTA 2. The players from the Philippines have had a long history of success in this game and for me, I’m just excited to have the opportunity to see some of the best players in SEA assemble under the Blacklist Rivalry banner and compete against the best in the world.” said Tier One Entertainment co-founder Tryke Gutierrez.

“We at Predator are honored to work hand-in-hand with Tier One Entertainment and Blacklist International in helping put the Philippines on the world stage. We have an extremely talented all-Filipino roster playing for Blacklist International and these players happen to be former champions of the Asia Pacific Predator League (APAC PL). We hope this all-star roster can also represent our country in the upcoming APAC PL 2024 which will take place in Manila. We can’t wait to see them break the code and claim another championship in front of a live audience right here in the Philippines! Blacklist International is an organization that Filipinos can stand behind and cheer for together so we’re going to help them succeed any way we can and we are committed to making that happen.”, said Acer PH general manager Sue Ong-Lim.

The team’s ultimate goal will definitely be representing the Philippines in The International, the most prestigious Dota 2 tournament in the world, in 2023. Blacklist International officially acquired the slot of Singaporean organization RSG in Division 1 of the next DPC season, which kicks off early next year so fans can catch them in action very soon!