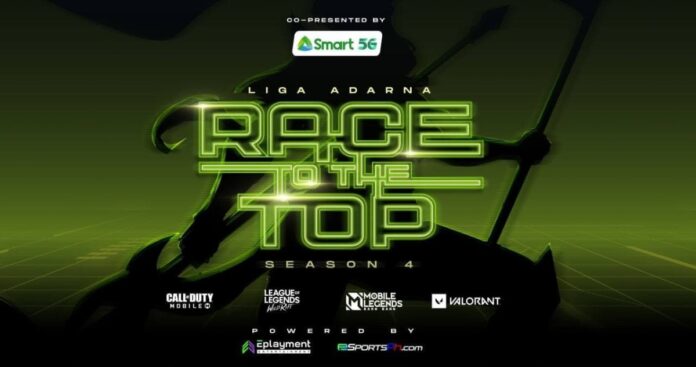 For Liga Adarna Season 4 entitled ‘Race to the Top,’ the country’s top female esports players to battle it out in four different games — Mobile Legends: Bang Bang, Valorant, Call of Duty: Mobile, and League of Legends: Wild Rift — until December 19, 2021, for a shot at the championship and prize pool of PHP220,000.

The Mobile Legends leg runs from September 17 to October 17, while the Valorant leg is scheduled from October 22 to November 14. On the other hand, the League of Legends: Wild Rift leg is set for November 18 to 21, while the Call of Duty leg is from November 26 to December 19.

Mobile Legends and Call of Duty Mobile will be contested in three rounds: open qualifier, elimination round, and playoffs. Valorant will have two rounds: group stage and playoffs. There will be a single tournament for WildRift.

Avid gamers and esports fans can catch the livestream of the Liga Adarna Season 4 games on their Facebook page at www.facebook.com/ligaadarna

The latest season of Liga Adarna is in line with Smart’s longstanding support for the fast-growing Philippine esports scene to promote and cultivate the passion, skill, and talent of Filipino gamers.

Aside from organizing the country’s biggest esports events and backing Filipino esports athletes, Smart supports gamers with relevant offers and services to level up their gameplay.

Subscribers can build their skills, step up and get Double GG with Double Giga Games, which comes with a solid allocation of 2 GB Games Every Day for their favorite mobile games like Mobile Legends, Call of Duty Mobile, League of Legends: Wild Rift, as well as streaming their favorite content creators on Facebook Gaming.

Filipino gamers can enjoy the best mobile gaming experience on 5G devices powered by Smart, the fastest 5G network in the Philippines as reported by Ookla®, the global leader in internet testing and analysis.  Smart also recently reaffirmed its dominance as the country’s fastest mobile network for the fourth year in a row, based on analysis by Ookla of tests taken with Speedtest® covering the Q1-Q2 2021.