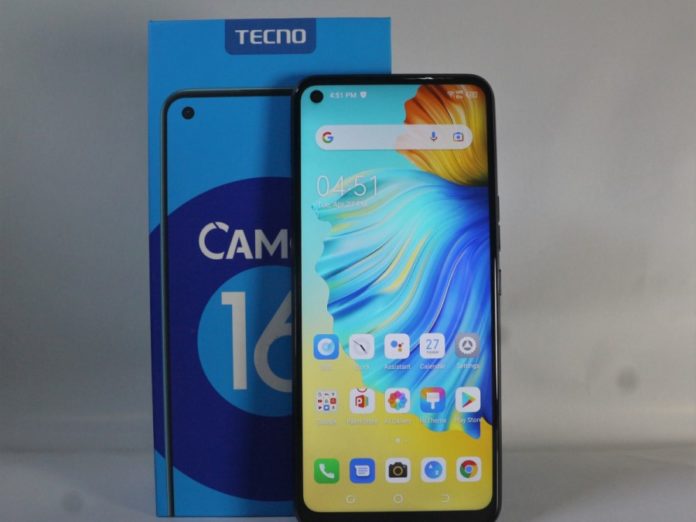 TECNO Mobile recently found success with their Spark-series smartphone. Now with a new line the Camon 16 the brand looks to shake up the market once again, this time by offering a camera-centric phone for the masses.

The TECNO Camon 16 is a looker. Our review unit was in the misty grey color, and it was a looker even with a jelly case on. Speaking of the jelly case, the glossy back was a fingerprint magnet, but the included jelly case saved me from fingerprint apocalypse, plus it was fairly thick and gave me reassurance in case I dropped it.

On the front of the phone is the 6.8-inch HD+ screen along with the 16-megapixel selfie camera. At the back is the quad-camera setup and below that is the fingerprint reader. On the left side is the sim card tray and microSD slot, on the right is the volume and power buttons. Lastly, below is the downward-facing speaker, micro-USB charging port, and headphone jack.

The Camon 16 is powered by a MediaTek Helios G70 octa-core processor with 6GB of RAM and 128 GB of internal storage.

The phone’s camera is its main feature, sporting a quad-camera setup at the back. It has a 48-megapixel main shooter, a 2-megapixel Bokeh lens, another 2-megapixel Macro lens, and the brand’s AI lens. The camera has 10x digital zoom, can record videos at 2K, and Ultra Night Lens.

You also won’t run out of juice with the massive 5000mAh battery which supports 18W fast charging. The phone lasted me a whole day of heavy gaming and needed just 2 hours to go back to 100%.

It was only last year when I first heard about Tecno Mobile. Since it was a newcomer, I set my expectations low since I didn’t know what I would be getting, rather experiencing. Boy was I surprised!

There are two features that surprised me the most: the cameras and its gaming capability.

The Camon 16’s cameras produced great and sharp images, especially outdoors. The 48-megapixel main shooter was able to retain most of the details of the shots. Sure it’s not flagship quality, but definitely way above its price range.

The camera was also able to shoot 2K videos, which I appreciate. It’s not 4K, but for the price, it was great to see something more than FHD. The camera also has 10x digital zoom, but in all honesty, it’s not great, especially if you have shaky hands such as me.

Moving on to the gaming aspect. The Camon 16 became my go-to gaming device in the two weeks I had it. The phone was able to run Call of Duty: Mobile at medium settings with high frame rates — not the best settings but more than enough to help me win some dubs. For MOBA games such as League of Legends: Wild Rift and Mobile Legends: Bang Bang, it was running on High setting with 60fps, good enough to play on the main stage of most gaming leagues. With dual-band, Wi-Fi was also great if you have routers with 5.0Ghz bandwidth for more stable gaming.

Additionally, and thankfully, the front camera placement was great for gaming. Most phones place the camera in the center nowadays, so having it placed back on the top left was refreshing to see. It was less distracting when I was engrossed in ranked games.

If there’s one thing that bugged me about the phone, it was the massive bloatware and ads that came out of the box. Most phones do show ads, but somehow I noticed it more on the Camon 16. Bloatware is also common; heck most brands have them, but yet again I feel that they are more noticeable on the Camon 16 than most. It’s not really dragging down the phone in terms of performance, but still, I was sort of annoyed from time to time.

Coming in at PHP 7,990. The TECNO Camon 16 does something few brands do: it offers great performance for value. I am looking forward to more value for money phones from the brand now that I have experienced a TECNO for myself.

The TECNO Camon 16 is beast made for gamers