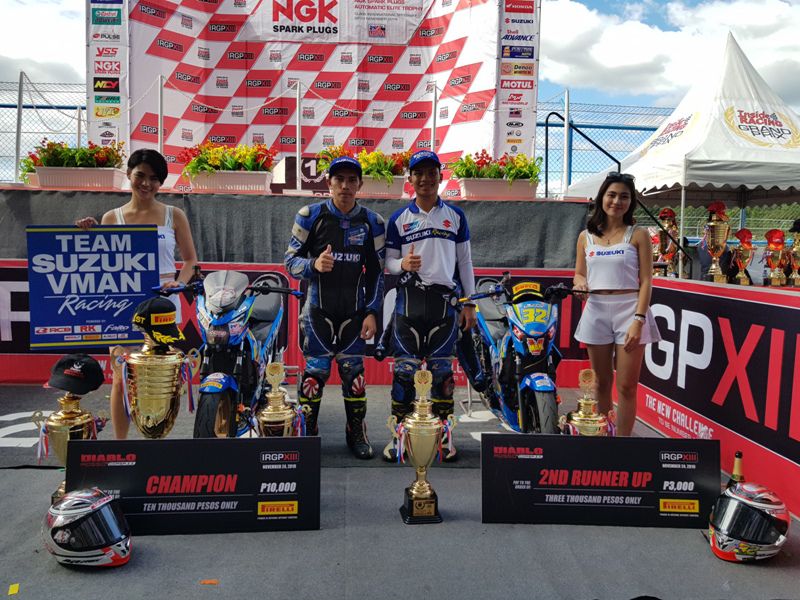 The Suzuki Raider R150 Fi remained as the undisputed ‘underbone king’ after dominating the nationwide championship race for the Super Series. For two consecutive years, the bike has maintained a very impressive performance which contributed to the current success of the Suzuki-VMan Racing Team. Its unbreakable feat continued at the much-awaited 13th Inside Racing Grand Prix (IRGPXIII) held at the Clark International Speedway.

Onboard on Raider R150 Fi with a sealed engine, Suzuki’s April King Mascardo consistently owned the racetrack at the Super Underbone Elite Category of the IRGPXIII. The bike’s signature DOHC 4-valve, 4-stroke, 150cc fuel-injected engine provided Mascardo the optimum performance he needed to continuously improve his lap time and break away from the pack during the qualifying and final race. Apart from bringing home the championship title, his excellent racing pace led him to get the Pole Sitter and the Fastest Lap awards. He recorded the best lap time of 1 minute and 9 seconds on the said class and managed to improve his distance from 2.6 seconds to 6.2-second gap from his opponent.

Meanwhile, Eane Jay Sobretodo secured the third podium for Super Underbone Elite race He was joined with teammates Roel Rubin (4th Place) and Jaypee Obedencio (5th Place) who also came all the way from the back to join the leading pack. The same scenario happened with Team Suzuki-VMan rookie rider Rmand Salandanan who won the Fastest Lap award at the Super Underbone Trophy Category. Along with these riders were Nikko Nambatac and Mark Santos.