Following the monumental success of last year’s edition of Fête de la Musique in Manila, which produced over 30 stages and welcomed more than 30,000 Filipino music enthusiasts, Alliance Française de Manille (AFM) and B-Side Productions are gearing up for a bigger and better celebration of music this year.

To help music fans in navigating the whole festival with ease, the organizers have partnered with Bizooku to develop the Fête PH mobile app,, which gathers all relevant information that Fête goers need to know about annual free-for-all music festival.

The app outlines the schedule of performances in the main stages as well as the schedule of events in the pocket stages. It also features a tab with maps, detailed addresses and contact numbers of all the venues for this year’s festival.

“The annual Fête de la Musique has garnered a huge following through the years. As it gets bigger, we would like to give music fans in the Philippines the best festival experience in every way possible,” says Jean-Pierre Dumont executive director of Alliance Française de Manille. “With the help of the mobile app, we are one step closer to that goal by keeping up with the times when everything is searchable online.” 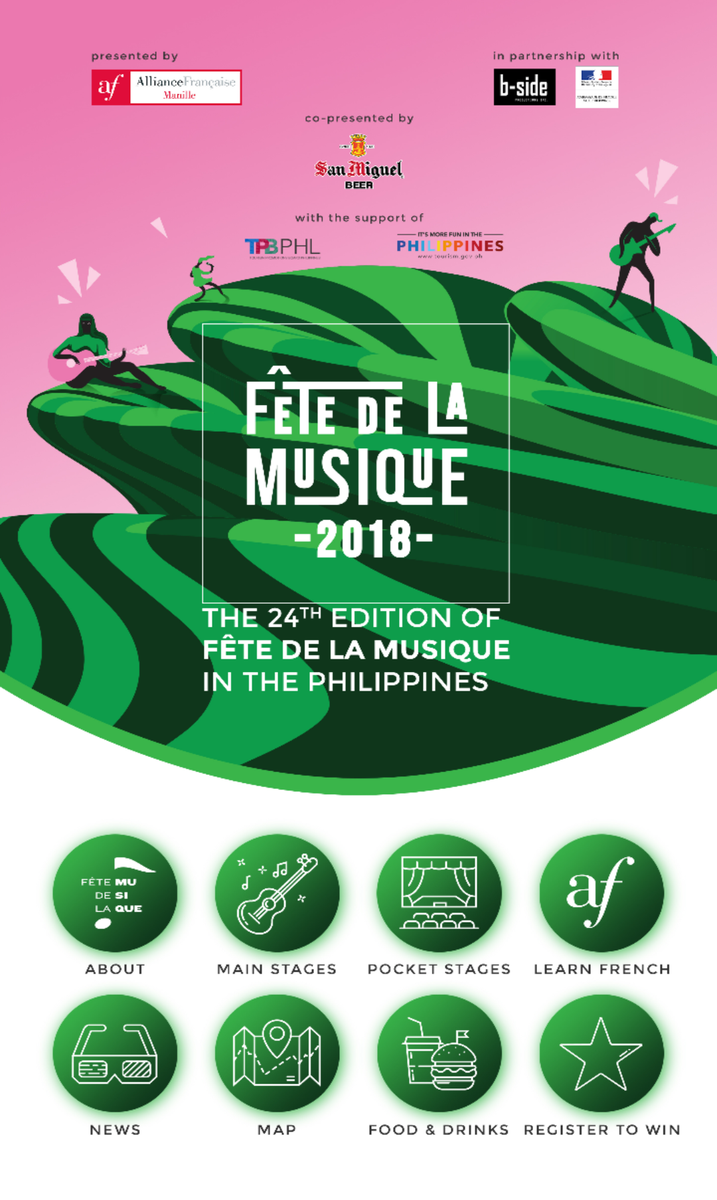 For its 24th edition, Fête de la Musique will continue its tradition of producing several main stages in the Philippines. On June 23, 29, and 30, music fans around the country will be treated with the best of the local music scene.

The most sought-after bands and up-and-coming artists will perform in A-Venue Parking Lot and Greenbelt 3 Park in Makati City on June 23. The day’s performers include: Ourselves The Elves, Pedicab, Orange and Lemons, Brass Pas Pas Pas Pas, Kjwan, Motherbass, BP Valenzuela, and a lot more.

Meanwhile, on June 29, the Puerta Real Gardens in Intramuros will be transformed into a concert venue for Sandwich, Apartel, Ebe Dancel, Autotelic, Tom’s Story, and many more.

Lady’s Symphony, one of the rising names in the European electro-pop scene, will also fly to Manila to join the festivities. Composed of French DJ Liz Candy, violinist Nyna Loren, and percussionist Narjess Saad, Lady’s Symphony presents a new approach to House Music that takes the audience to a magical trip full of electronic rhythms and strong melodies.

There will also be main stages in Baguio City with Ang Bandang Shirley and Kat Agarrado, and in Pagsanjan, Laguna on June 30.

A pre-Fête main stage will also be held in Luneta Park on June 16.

As in previous years, the organizers have collaborated with different independent production outfits to create genre-based pocket stages that cater to all tastes in music.

On June 23, Makati City will be energized with more than 35 pocket stages scattered across different bars, restaurants, artistic spaces and cultural hubs.

Find out more about the music acts performing on the main stages and the events in the pocket stages by downloading the Fête PH app.

The 24th Fête de la Musique is presented by Alliance Française de Manille in partnership with B-Side Productions and the Embassy of France to the Philippines. The event is co-presented by San Miguel Corporation.