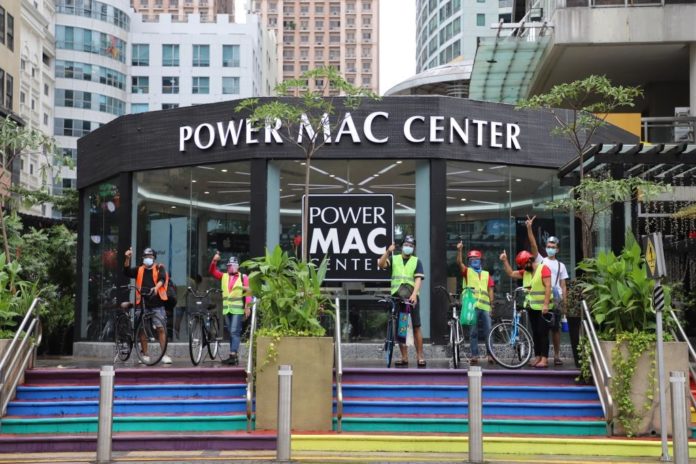 The Filipino bayanihan spirit came alive at the Eastwood Mall Open Park as premier Apple partner Power Mac Center and TV personality Gretchen Ho’s Woman In Action initiative gave away free bicycles to people who find it difficult to commute to work because of the COVID-19 pandemic. Power Mac Center customers, through its “Pay It Forward” campaign, helped acquire the bicycles through proceeds from participating products during its anniversary week sale.

Launched in August as part of the company’s 26th anniversary, the Power Mac Pay It Forward campaign served as a way to help workers and front liners under Gretchen Ho’s #DonateABikeSaveAJob project. It was able to raise PHP 488,834, which was used to purchase a total of 139 bicycles, as well as biking gear.

During the event, Gretchen and Woman In Action turned over 80 bicycles, while the other 59 were given in advance to victims of Typhoon Ulysses and residents of Brgy. Payatas in Quezon City. Beneficiaries have been pre-scheduled to avoid crowding. Also invited to the event was Life Cycles PH, a group that pairs institutions in need with generous bike donors, who taught the beneficiaries basics on road safety while biking.

“At this time when unity and selfless service are called for, we’ve seen modern heroes rise up. We thank Ms. Gretchen Ho and all our customers who generously supported our Pay It Forward campaign and helped us provide 139 deserving individuals with a means to reach their destination. This year has been difficult for everyone, and Power Mac Center salutes those who strive to push forward amid challenges,” said Joey Alvarez, Power Mac Center director for product management, marketing and space planning.

“It was truly amazing to have raised this much in a short span of time. Thank you, Power Mac Center, for choosing to donate it to our project as we help more people have access to work and livelihood during the pandemic. We are looking forward to more fruitful partnerships in the future,” said Gretchen Ho.

More details about Power Mac Center’s anniversary projects can be found at the website and online store or the official Facebook page. You can also read the inspiring stories of the Pay It Forward beneficiaries by visiting <womaninaction.ph>.

Allianz PNB Life, one of the country's major insurance companies, is urging motorists to be more proactive participants in making roads safer for bicycles...
Read more

San Miguel Corporation is building its first urban farm, dubbed as the Malasakit Garden, within its sprawling head office complex in Ortigas to help...
Read more

PLDT Home, through the PLDT Smart Foundation (PSF), recently turned over to the Department of Education (DepEd) one thousand units of Home WiFi Prepaid...
Read more

San Miguel Corporation (SMC) is extending the total reach of its PHP 1-billion Tullahan-Tinajeros river system cleanup to 11.5kms, close to half of the entire...
Read more