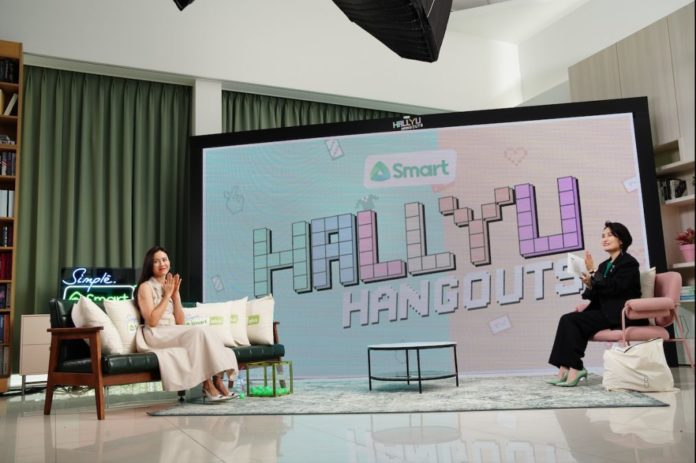 Initiated by leading mobile services provider Smart Communications, Inc., Smart Hallyu Hangouts is a series of online shows where subscribers can watch their idols through a live feed from wherever they are in the world.

The series kicked off with no less than Crash Landing On You (CLOY) superstar and Smart Signature endorser Son Ye Jin, who was joined by Philippines-based host Sam Oh, Korea-based co-host Park Kyung-Lim, and 40 lucky fans.

“Our language and culture are different but despite this, I can feel all the love. I don’t know if I deserve this overwhelming love. I am thankful, moved, and motivated because when I hear how I’ve helped you get through difficult times, it makes me want to work on the next project,” said the multi-awarded Korean actress Son Ye Jin.

During the Smart Hallyu Hangouts event, Son Ye Jin shared a lot about her acting philosophy, her workout regimen, and even her behind-the-scenes moments from global phenomenon CLOY as well as her commercial for Smart released earlier this year.

“There were very long hours during the Smart shoot and we were on location. It took all morning and all night to shoot. And we were also remotely shooting with the Philippine team,” Son Ye Jin recalled.

“It was kind of a strange situation but also very fascinating to be virtually communicating with the team in the Philippines. But I was very honored to have shot this commercial for Smart and I’m very happy to be working with the brand right now.”

The actress also offered interesting trivia about herself during the Smart Hallyu Hangouts, such as her favorite color (light Indian pink), hobbies (exercising and walking her dog), a favorite aspect of herself (when she can make someone laugh), and beauty secret (indulging in hair treatments). She has also been practicing Pilates for 10 years, she never watches herself on TV as she feels embarrassed and awkward, and she attributes her ability to play diverse roles and genres to a deep sense of empathy for whichever character she plays.

When asked about her experience in the Philippines, she said: “I’ve been to the Philippines a very long time ago, and the most memorable thing about that trip was the friendly faces of the Filipinos. I could see that everyone was very happy and friendly, and there was an innocence about them. The next time I go again, I would really love to go to Boracay.”

“I hear through the messages and gifts that Filipinos send me that they’re very thankful for helping them get through this difficult time,” she added. “But I haven’t done anything; all I did was my job. I’m so moved that people from far away, across oceans, feel this way about what I’ve done. It almost feels a little odd sometimes but overall, I’m just very thankful and I look forward to meeting you all in the Philippines.”

The Smart Hallyu Hangouts event had more surprises in store for Smart subscribers, as five names were drawn and these fans were each given an autographed gift bag which Son Ye Jin prepared herself. On top of that, two thrilled fans were each given a minute-long one-on-one chat with Son Ye Jin, as well as personal, pre-loved gifts from the actress herself. The event wrapped up with a heartwarming tribute video for Son Ye Jin created by her Filipino fans, and a digital photo op session with all the attendees.

Smart Hallyu Hangouts is one of the brand’s ways of bringing amazing experiences to its valued subscribers. Despite the physical limitations brought about by the pandemic, Smart champions its dedication and cutting-edge technology to bring its Korean endorsers closer to their Filipino fans.