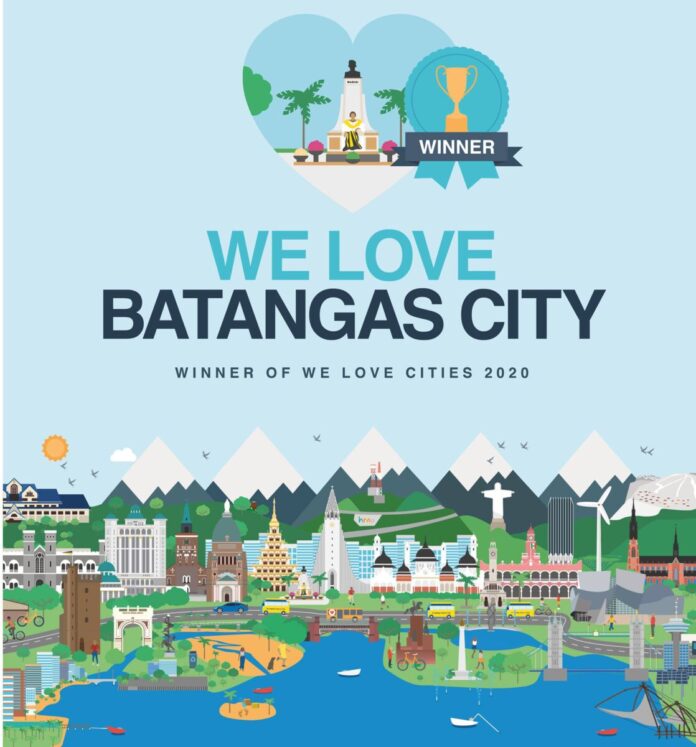 Batangas City has been hailed as the World’s Most Lovable City and overall winner in this year’s edition of the World Wide Fund for Nature’s (WWF) We Love Cities campaign.

The award announcement was held online via Zoom last October 28, which was attended by representatives from WWF national offices and We Love Cities campaign finalists. Oliver Gonzales, environment and natural resources officer of Batangas City, expressed his joy over the result of the public engagement campaign.

“We’re overwhelmed and happy. This challenge brought us together and made us proud as citizens of our city. We want to thank WWF-Philippines for their great support and guidance throughout this challenge. This means a lot to us especially since we’ve been hit by the pandemic. The city is doing its best in implementing various initiatives and efforts. We have something new to hold on to, and this is great news to all of us. This win will inspire us to keep on going and to work hand-in-hand for this city,” shared Gonzales.

The We Love Cities Campaign, which has empowered the general public globally with the opportunity to celebrate, vote, and upgrade their city through suggestions made and addressed to decision-makers, is interwoven with the One Planet City Challenge (OPCC)—a biennial global challenge organized by WWF to guide cities towards the most effective climate action, while publicly recognizing the most ambitious cities as leaders in the field of sustainable urban development.

Through the OPCC, the country’s declared national winner for 2020, Batangas City, and national finalists, Muntinlupa City and Santa Rosa City, were the representatives of the Philippines in this year’s We Love Cities campaign. All the three Philippine cities ranked into the Top 10, out of 54 cities in 26 participating countries across the globe for the 2020 edition. Citizens from these countries expressed their love and support for their cities with the campaign garnering over 1,170,000 votes through all channels, 4,600,000 social media engagements and a social media reach of 80,000,000.

“Our three Philippine cities that participated in the We Love Cities initiative really stepped up to the plate and did quite well, even as they were addressing the current challenges brought by the pandemic. We are truly honored by their participation. Thus, this We Love Cities award for Batangas City is particularly special. It also highlights the active engagement that Filipinos have with their cities as they promote their solutions, and aim to make their cities more livable, sustainable and resilient.  It is truly aligned with WWF’s call: Together Possible.”, says Atty. Angela Ibay, WWF-Philippines’ Climate and Energy programme head.

In addition to recognizing the importance of public engagement in achieving sustainability goals, Batangas City aims to be the first carbon-neutral city in the country by 2030 and has developed a comprehensive climate mitigation and adaptation plan to realize this vision.

HP continues to make positive, meaningful impacts on our planet, people, and communities

PLDT energizes its biggest solar rooftop facility in the Visayas