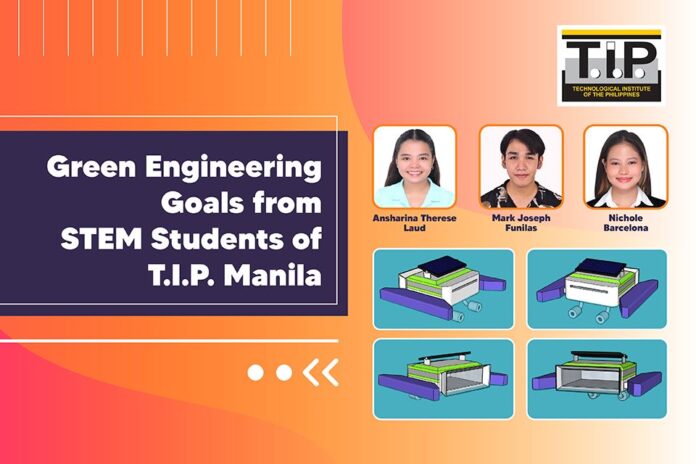 Motivated by their strong feelings against water pollution and its harmful effects on public health, three senior high school students from the Technological Institute of the Philippines (T.I.P.) in Manila are trying to blaze their own trail toward the field of green engineering.

Grade 12 students Mark Joseph Funilas, Nichole Emmanuelle Barcelona, and Ansharina Therese Laud recently got the attention of their mentors and peers after developing an idea for an anti-water pollution device called “BuzzBuzz.”

This theoretical machine hopes to clear highly polluted streams and waterways of solid wastes, like plastics and other discarded objects, and potentially dangerous microorganisms that can cause diseases.

“It works by integrating a built-in sensor in the machine, which solar panels and lithium-ion batteries will power, that could filter out water pollutants it is programmed to detect. These, in turn, would automatically be collected and disposed of properly,” the group explained.

The look of the device was partly inspired by the animated fictional character Buzz Lightyear — the legendary space ranger in the Toy Story franchise — so they decided to name their theoretical invention “BuzzBuzz.”

Their proposed concept won the Technology Innovation Challenge from the Institute of Electronics Engineers of the Philippines (IECEP) Manila Student Chapter last October 2022, which took them to the national level of the competition where they placed first runners up.

Established in 1950, the IECEP is a non-stock, non-profit organization duly recognized by the Professional Regulation Commission with thousands of members composed of registered and globally-competitive electronics engineers in and outside the country.

Funilas, Barcelona, and Laud, who are all currently enrolled in the science, technology, engineering, and mathematics (STEM) academic track of T.I.P. Manila, “hope to build on this accomplishment by turning their idea into a marketable product someday.”