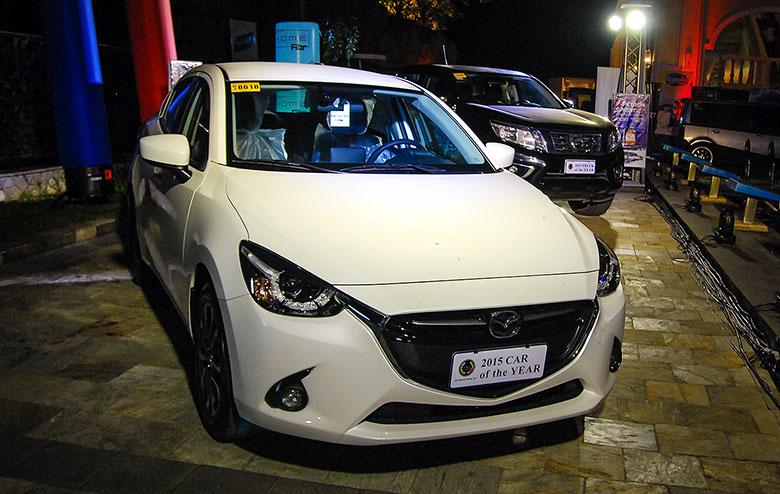 After months of preparations and four Testfests, the Car Awards Group, Inc. (CAGI), the country’s premier automotive award-giving body, has named the Mazda 2 the 2015 Car of the Year-Philippines (COTY-P) and the Nissan Navara the Truck of the Year-Philippines (TOTY-P). The announcement was made at the CAGI Gala Awards Night last November 13, 2015 held at the Fontana Hot Spring Leisure Parks & Casino in Clark Freeport Zone, Pampanga.

The overall Car of the Year title was awarded to the Mazda 2 Skyactiv R 4-door, which also won the Best Subcompact Car category. It outshined all the other 65 nominees that vied for the top award, beating them for its merits in performance, aesthetics, driving experience, and price just to name a few. The last Mazda to get the award was the Mazda 6 that won in 2013 – 2014.

As for the other winners in the car categories, the Suzuki Celerio GL 1.0L MT was named as the Basic Subcompact Car of the Year, while the Kia Forte Koup 2-door Sedan received the Best Compact Car of the Year award. The Mazda 6 Sports Wagon won the Best Midsized Car category, the Volvo S60 D4 Polestar in the Best Premium Sedan segment, and the Jaguar XE 2.0 as the Best Luxury Sedan.

This year’s awards also saw a large number of crossovers and MPVs on the entry list. Top honors in the Best Subcompact Crossover SUV category went to the Nissan Juke, the Best Compact Crossover SUV to the Honda HR-V 1.8L EL CVT, while the Best Crossover SUV award was given to the Mazda CX-5 AWD Sport. But the most extravagant of them all is the Lexus NX 200t F-Sport that took home the trophy as the Best Luxury Crossover SUV of the Year. The MPV categories, on the hand, was a clean sweep by Honda who won both the Compact MPV and Luxury MPV of the Year with the Mobilio 1.5V CVT and Odyssey 2.4L EX-V Navi, respectively, while Ford took home both the 4×2 and 4×4 SUV categories with the Everest Trend 2.2L 4×2 AT, and Everest Titanium 3.2 4×4 AT variants.

The most exciting vehicles that entered the 2015 COTY-PH awards, however, were the sports and luxury cars. The Volkswagen Golf GTI, Subaru WRX 2.0 MT, and Mazda MX-5 MT were the big winners in the Best Sports Hatch, Best Sports Sedan, and Best Sports Car categories. Then there were the big muscle cars from Ford and Lexus with the Mustang 5.0 V8 GT Premium taking the Best Premium Sports Car award and the RC-F taking the Best High Performance Sports Car.  Finally, the extravagant pair of the Rolls Royce Wraith and Ferrari California T was this year’s Ultra-luxury Car and Sports Cars of the Year.

Established in 2004, the Car Awards Group, Inc. is the longest-running organization of motoring journalists in the country today. Since its incorporation, the group has strived to find the best vehicles in the country through independent, and comprehensive testing. CAGI’s testing and scoring process is composed of qualitative and quantitative criteria, plus other factors such as safety features and pricing compared to its competitors. The COTY-P and TOTY-P award isn’t just about who is the biggest, strongest, and fastest, but who offers the most complete package.

“CAGI has completed the most thorough and critical consumer-oriented vehicle review process in the country. We tested 78 cars and trucks from the 2015 model year, involved roughly 1,500 testdrives over 4 days. To all the car manufacturers and distributors who fielded an entry in this year’s COTY Awards, we highly appreciate your trust and confidence for allowing us to test and scrutinize your cars. Above all, thank you for supporting the objective of the COTY Awards to raise consumer awareness,” said Robby Consunji, president of the Car Awards Group, Inc.

“On behalf of CAGI, I would like to thank all our sponsors who helped us out this season, with a special mention of our event partner, the audit firm KPMG R.G. Manabat & Company who was instrumental in refining the process and methodology of the COTY Awards. They were also the ones who tabulated the votes and conducted an independent validation of the scores that led to this year’s batch of winners. We would like to thank our event partner Fontana Hot Spring Leisure Parks and Casino for graciously hosting our Testfests, as well as our gala awards night, and to our co-presenter carmudi.com.ph for their trust and support,” he added.

Aside from the category winners, our valued sponsors also gave out special awards to deserving winners.