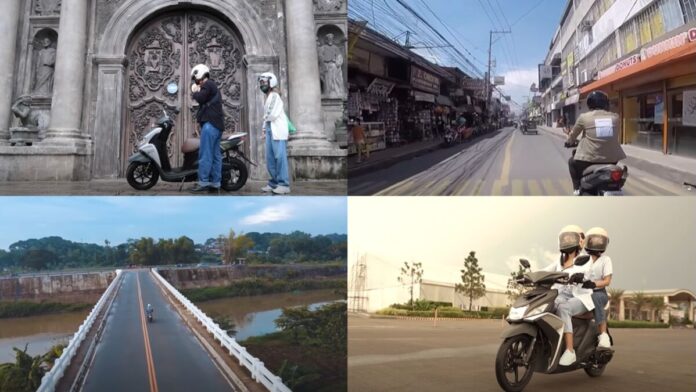 Have you ever wandered to a country with a thousand islands? Where natural charm from the depths of its seas, the summit of its mountains, and the vibrant culture of cities complete your trip. That’s what the Philippines is known for; having a beautiful destinations waiting for everyone to discover.

The Filipino tattoo patterns incorporated in the units’ graphic design focus on different regions of the Philippines (Luzon, Visayas & Mindanao), each representing a distinct culture. The leather-inspired seat color pays homage to our country’s native heritage while the stylized grab bar is in a unique shade that is exclusive to this lineup. The Mio’s reflectorized graphics are inspired by tribal markings complimented with a gradient hue. All these features symbolize how Yamaha values the culture within us all, respecting how rich the Philippines is not only in wealth but also in history.

How does one person find his trip?

This year, Yamaha Motor Philippines, Inc. introduced the #findURtrip campaign where the MIO motorcycles — Mio Sporty, Mio i125 S, Mio Soul i125 S, Mio Gear S, Mio Gravis, and the new Mio Aerox S — embody the designs that are truly Filipino.  As #findURtrip brings together a collective of unique personalities, YMPH collaborated with known vloggers and influencers to bring out the spirit of freedom.

Carrying the excitement in exploration, the six personalities find their way back to their first love – a road trip.  The model/streamer Christine Samson explores her hometown with the Mio Sporty, reminiscing on her childhood memories. Revisiting Laguna’s delicacies, actor/vlogger Ronnie Alonte rides his Mio Soul i125 S to get a taste of “puto” Binan.

Every trip will never be completed without your travel buddy, that’s why the former PBB (Pinoy Big Brother) housemates, now turned vloggers Joj and Jai Agpangan had a twinning date in the South with their Mio i125 S. Getting lost in nature, the well-known Filipino influencer Kimpoy Feliciano strolls around the beauty of Rizal with his Mio Aerox S. Meanwhile, David Guison achieved another relationship goal with his girlfriend Angelique Manto as they journeyed back in time in Intramuros, riding the Mio Gravis. Finally, vlogger and basketball coach Mavrick Bautista, will also create a vlog using the new Mio Gear S showing off the character and extensibility during road trips.

When things get better, ride into the culture of destinations

Having their interpretation of escape and adventure, these vloggers prove how exciting it is to #findURtrip in every location. With interests that define their character, their very presence, taste, influence, and originality is what turns a location into a destination, anywhere in the Philippines. When everything gets better, #findURtrip with the Yamaha Mio.

Stay updated by following the Yamaha social accounts on: