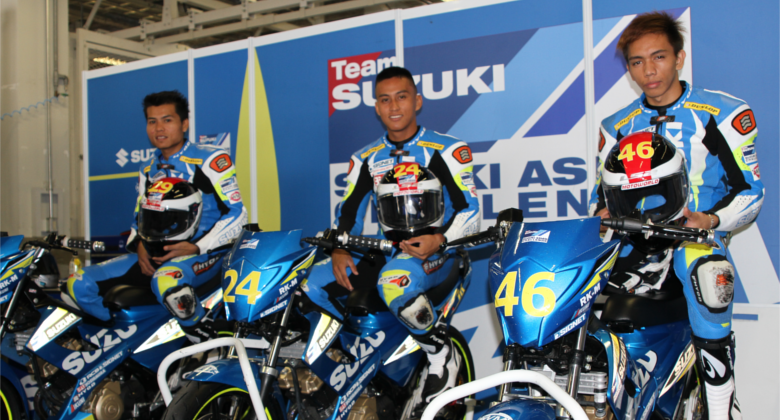 Team Suzuki Pilipinas came to play during the third round of the Suzuki Asian Challenge (SAC) of the Asia Road Racing Championship (ARRC), coming away with their first-ever podium win. The race was held at the Suzuka International Circuit last July 4 to 5, and was a home race for the brand as well as SAC producer and manager, Yukio Kagayama.

The already difficult track became even more challenging as rain frequented the two-day race. Despite the odds, Team Suzuki Pilipinas managed to lock themselves in the 9th (Enzo Rellosa), 11th (April King Mascardo), and 15th (Mario Borbon) grid positions after the qualifiers. During Race 1, Mascardo was able to secure the third position with a time of 16’30.638; Borbon came in fifth clocking in at 16’43.589; and Rellosa was sixth with a time of 16’43.808. Unfortunately, five of the 17 participants were taken out by the slick course.

Though Race 2 suffered the same conditions, the Philippine team was able to finish with better times. Borbon clocked 15’34.398 and Mascardo finished the race a few milliseconds behind at 15’36.695. Rellosa however was taken out of the race by another crashing rider.

“My podium finish was a surprise for me. I was just focused on the race and just giving it my all and then I was already there on the third spot. I’m so overwhelmed!” April King Mascardo shared.

“This success is very meaningful to the team. Suzuka is one of the most difficult tracks in the world and our boys did well. Our win only showed that we can do it, that we can race alongside stronger teams from other countries. The team is more enthused to do better and we are excited on the next leg”, said Suzuki Philippines Racing specialist Noel Villapando.

All new Suzuki Avenis performs during the long and fun ride