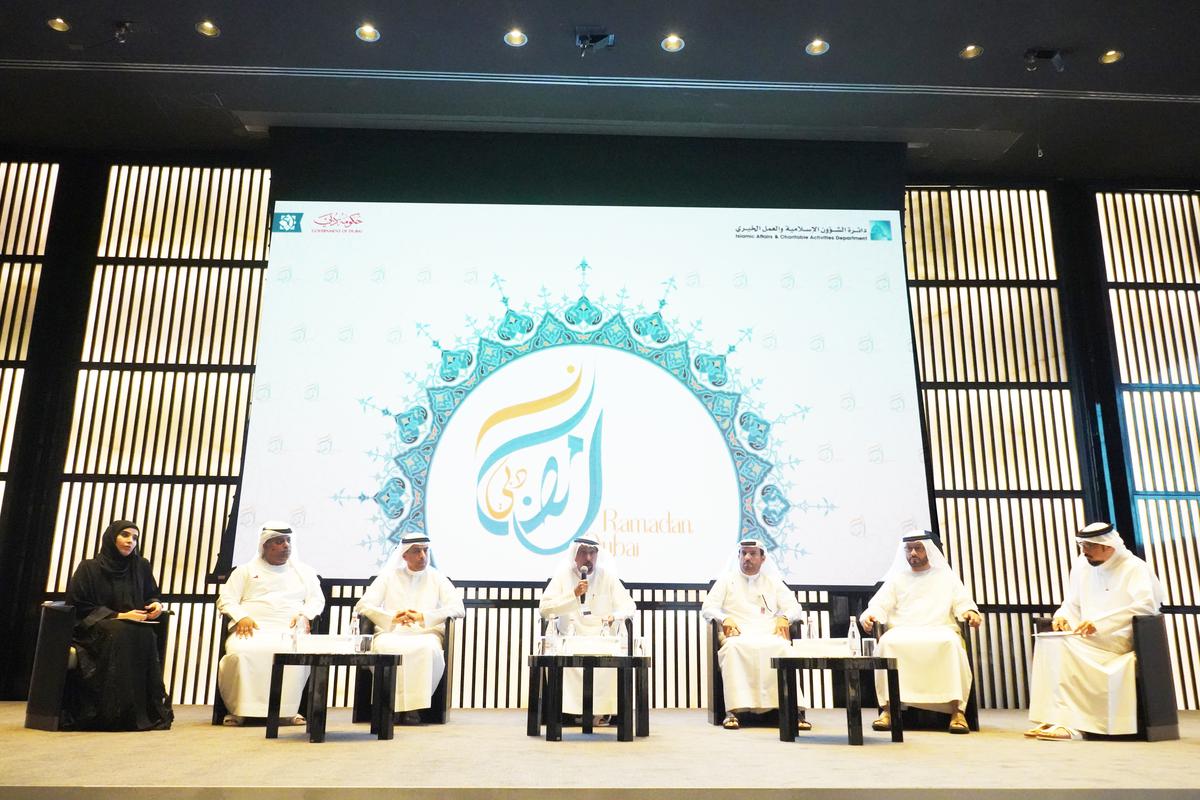 The Department of Islamic Affairs and Charitable Activities in Dubai has announced the launch of the first edition of “Ramadan Dubai” under the theme Ramadan Dubai is Compassion and Coexistence. The event seeks to spread the values of Islam and the spirit of tolerance among citizens and residents of different communities through the promotion of tolerance and peaceful coexistence based on the principles of the Qur’an and Sunna. Ramadan Dubai anticipates the participation of all classes in society, including men and women, children, the elderly, various Arab and foreign communities, families, and government and private institutions.

The announcement was made during a press conference held at the Armani Hotel, Burj Khalifa, in the presence of His Excellency Dr. Hamad Al Shaibani, Director General of Islamic Affairs and Charitable Activities Department, and the Chairman of the Higher Committee of Ramadan Dubai, along with directors and heads of various government departments and representatives from the various media.

Shaibani expressed his heartfelt greetings in anticipation of the holy month of Ramadan to His Highness Sheikh Khalifa bin Zayed Al Nahyan, UAE President, and to His Highness Sheikh Mohammed bin Rashid Al Maktoum, UAE Vice President and Prime Minister, and Ruler of Dubai, as well as to rulers and crown princes, and deputy rulers of the Emirates and the citizens living in their territories and those from other Arab and Islamic nations.

“As it continues its journey of Islamic leadership, the Islamic Affairs and Charitable Activities Department carries on the task of disseminating and promoting moderate Islamic values and embodying the practice of tolerance, which stems mainly from the law of God. The holy month of Ramadan is the most suitable time to inculcate the value of tolerance for different religions through peaceful coexistence, respect, and acceptance of others, within the boundaries and borders of the tolerant United Arab Emirates.”

According to Shaibani, the objectives of the first edition of Ramadan Dubai include spreading the values of Islam and the spirit of tolerance among citizens and residents of communities, promoting tolerance and peaceful coexistence through the Qur’an and Sunna principles, and providing lessons and religious lectures. It also seeks to enrich the social life by establishing an effective social network and by creating a channel of tolerance that can freely flow between various sects, nationalities, cultures, and to provide content that contributes to the awareness of our religion with the hope for the participation of various foreign communities to know more about the values and customs of Islam that is tolerant, moderate, free of violence and extremism, a religion that does not reject but instead is accepting of the concept of peaceful coexistence.

Also present at the press conference was Mr. Ahmed Darwish Al Muhairi, Executive Director for the Charitable Work Sector at IACAD, who also welcomed the presence of guests, including dignitaries, officials, and the media.

In his speech, he pointed out that various committees have completed their preparation for the programs and activities of Ramadan Dubai for 2019 to be announced to the public and in alignment with the initiatives for the UAE Year of Tolerance. The emphasis will be on the promotion of moderate values of Islam, preservation of identity and the national development of the United Arab Emirates, and the continuing development works in service of humanity and the homeland, building bonds of cooperation with relevant authorities, as dictated by the teachings of Islam.

Muhairi said, “As a pioneer in the service, caring for and constructing the houses of Allah in the Emirate of Dubai, the Department seeks to enhance the role of these mosques socially and culturally by providing the scientific and professional cadres in the field and by providing the requirements of the worshippers to the fullest extent. With the awareness and methods that are implemented in mosques throughout the year, we are witnessing the turnout of thousands of worshippers. The level of our service delivery is in accordance with best international practices and includes the efforts of many nationalities residing in the UAE.”

In turn, Dawood Mohammed Al Shezawy, Chairman of the Organizing Committee of Ramadan Dubai, has shared that necessary preparations have been completed with the precise discipline to achieve the goals of Ramadan Dubai. “We are gathered today to launch the first Ramadan Dubai. We have completed all the necessary preparations for its various activities which we intend to implement with extreme precision. We are ahead with the preparation in order to achieve the desired goals of spreading the values of Islam and the spirit of tolerance among citizens and residents of communities.”

He added, “Ramadan Dubai is aiming for the participation of men and women, children, the elderly, various Arab and foreign communities, families, and government and private institutions, as exemplified in various programs such as the Rashid bin Mohammed Ramadan Forum, Ramadan Majlis, Ramadan Spirituality, Iftar Dialogue, Ramadan Nights and Squares, The World in Ramadan, The Emirati House is United, The Good Pathways, Journey with the Prophet Muhammad, peace be upon him, and the Names of God.

Jassim Al-Khazraji, Chairman of the Content and Events committee, said, “Under the umbrella of the Ramadan Dubai are educational and interactive events and programs which were carefully selected in line with the spirituality of the holy month. These include dialogue sessions, spiritual activities, competitions, and distribution of gifts organized by a number of government agencies in Dubai, which in turn, will transcend the human instinct over the mundane rituals during the holy month. We also thought of reviving the ancient traditions of direct and face-to-face communication, which has a special impact on hearts and souls, amidst the various advancement in digital communication.”

Sheikha Al Marri, Chairman of the Committee on Information and Communication, stressed the vital role played by the media in all its forms of visual, audio, and print, in addition to social media, in promoting the events and activities of Ramadan Dubai, as well in conveying its message, objectives, and contents to the general public.

Mohammed Al Suwaidi, Chairman of the Partners Committee and Sponsorships, said, “Cooperation and joint efforts with the private institutions and associations will make this event successful in achieving its desired goals of spreading and establishing the tolerant teachings of our religion based on coexistence, tolerance, and compassion.

Ahmed Abdullah, Chairman of the Logistics Services Committee, spoke about the active and supportive role of private companies and hotels to serve and support Ramadan guests in Dubai.

For his part, Mohammed Misbah, Chairman of the Protocol and Public Relations, said, “We will spare no effort to provide all means of comfort and facilities to our guests and event participants, as a reflection of the global image of the Department and the Emirate of Dubai.”

Iftar Dialogue is an educational program to be held in Ramadan tents, to spread the teachings of the Islamic religion among the members of the various communities. Participants can ask various questions related to religious issues in general and specifically on the month of Ramadan.

Customs and rituals during the holy month of Ramadan as practiced by different countries will also be featured, with emphasis on the differences due to diversity of culture, environment, and economic, political, and social conditions.

Ramadan Nights and Squares, which aims to revive the nights of the month of Ramadan, is spread over major shopping centers in the Emirate of Dubai. The program includes a range of events and activities that promote a culture of tolerance and acceptance of diversity, pluralism, and respect. This feature suits all ages from different Arab and foreign communities. There will also be various artistic workshops such as the art of writing the Quranic text, calligraphy, and painting workshops, among others, in an innovative atmosphere that sends positive energy and a sense of satisfaction and tranquillity between participants.

Ramadan Dubai also offers The Good Pathways which is a package of various charity projects organized and implemented by the Department in partnership with a number of charities in the Emirate of Dubai.

There will also be interactive films shown on most prominent stations featuring the life of the Prophet Muhammad, peace be upon him, in addition to explaining in detail the meanings of the various names of God and the impact of those meanings on a Muslim and in his daily life.

Pacific Global One Aviation (PG1), the aviation arm of PLDT, Inc., embarks on a major rebrand as it expects the global air charter business...
Read more