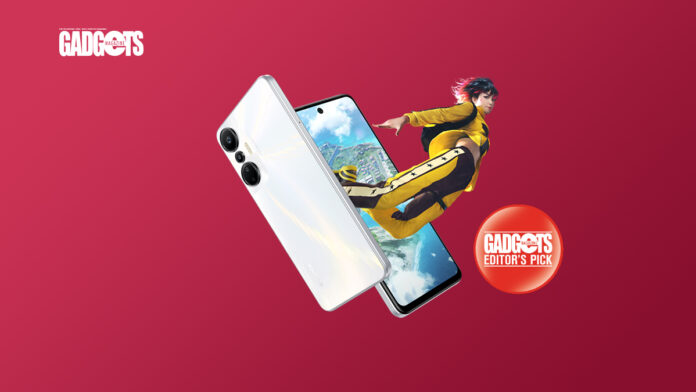 The new Infinix HOT 20S Free Fire Edition is a collaboration with Garena’s Free Fire, a battle royale game with a massive following in Southeast Asia. Over the last few years, Infinix has gained a reputation for offering smartphones with outstanding performance and even greater value. In particular, the Inifinix HOT Series and Notes Series have been hits for those looking for bang-for-your-buck mid-range smartphones with good gaming specs.

The phone has a 6.78-inch display with Infinix’s FHD+ HyperVision Gaming Pro-Display. Essentially, it’s an IPS display with a 2460 x 1080 resolution and a 120Hz refresh rate.

Infinix offers the HOT 20S in four colors: Light-Rider White, Fantasy Purple, Tempo Blue, and Sonic Black. The phone is mostly plastic but of the premium, glossy kind. The glossy finish, unfortunately, makes it a fingerprint magnet. Not to worry, a clear jelly case is provided to protect the phone from bumps and your fingerprints.

Also on the front is the 8-megapixel front camera, plus the earpiece that doubles as the secondary speaker. At the back is a triple-camera setup. I like the uniqueness of the camera setup with the two large circles at the back, making the phone stand out from what’s currently in the market.

The sim card tray and micro-SD slot are on the left of the phone. On the right are the volume keys alongside the power button doubling as a side-mounted fingerprint reader. The downward firing speaker, the USB-C charging port, a 3.5mm headphone jack, and a mic hole are on the bottom.

Powering the Infinix HOT 20S is an octa-core Mediatek Helio G96 Processor with 8GB of RAM that can be virtually expanded up to 13GB. It has 128GB of storage, expandable via microSD.

The Mediatek Helio G96 on this phone was a beast. It can handle most esports titles like Free Fire, PUBG, and League of Legends: Wild Rift with ease at maximum settings. When it came to heavier games like Genshin Impact, it was still able to perform, outputting around 40-50+ fps on the highest setting.

The primary camera is a decent 50-megapixel shooter paired with a 2-megapixel depth sensor and another 2-megapixel macro camera. There’s no ultra-wide camera which, I reckon, is due to the brand’s effort to keep the price down.

The camera itself is alright. Daylight shots are good and sharp, as expected. What surprised me was how it dealt with night shots, which came out fine — not too much noise with good color capture.

Battery-wise, the phone lasted at least two days of minimal use (light gaming and streaming). The phone has a 5000mAh battery and 18W fast charging. That being said, since it’s geared toward gaming, I was hoping for at least 33W of fast charging so you won’t have any downtime. But again, for the price, I can’t complain.

The Infinix HOT 20S is my first review of an Infinix device, and honestly, I was quite amazed. I used the phone mainly as a gaming/ streaming device, and the speakers blew me away. For its price, the stereo speakers are loud. The display is also alright, considering that this is an IPS display, not AMOLED.

The phone’s gaming performance is excellent! It was able to run all the games I threw at it flawlessly. Genshin Impact had some frames drops, but even flagship phones can’t handle that game at max settings.

What thoroughly impressed me was how the phone handled the heat. Throughout benchmarking and heavy gaming sessions, the phone did not heat up. The only thing I noticed was that it got warm, but not even to the point of making my palms sweaty.

The Infinix HOT 20S Free Fire edition is made for Free Fire fans. It has a Free Fire skin over its XOS 12 UI. While I’m not a Free Fire player, I thought the gun sound notifications were pretty cool.

There’s not a lot to dislike about the Infinix HOT 20S, although there are some things you’ll need to get used to. First, the size. At 168.65mm tall and 76.75mm wide, the phone is bulky. Add to that its 202g weight, and it’s definitely a two-hander media device. A phone stand helps with the size and weight when binge-watching videos. Second, the square-shaped body also takes some getting used to, but the jelly case helps when handling the phone.

Coming in at just PHP8,499, the Infinix Hot 20S is a great budget smartphone for those looking to game or binge-watch. It does have some very minor shortcomings, but for the price, who’s complaining?

A great budget phone for gamers