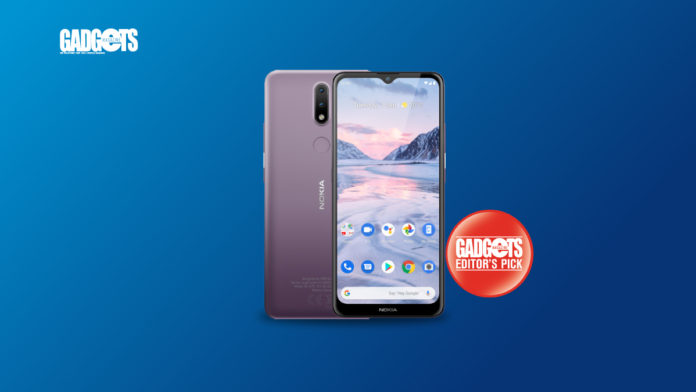 The Nokia 2 series has long been a solid mid-ranger smartphone ever since HMD Global took over the Nokia name. Now on its fourth generation, does the Nokia 2.4 carry on its value for money appeal set forth by its predecessors?

Ever since I started working from home, my father has increasingly grown curious about the devices I have been reviewing. Upon seeing the Nokia 2.4, he was impressed by its looks even speculating that it might be on the upper mid-ranger because of it. The device is one heck of a looker.

The Nokia 2.4 sports a somewhat sharp rectangular shape which adds to that professional-slash-elegant appeal. The back is all plastic, but the 3D Nano-textured design (this what HMD calls its engraved back) makes the phone easy to hold and removes any of the slippery feel to it. If you’re the cautious type, a jelly case is included in the box, as is a 3.5mm headset (a rarity these days).

The front of the phone features the 6.5-inch HD+ display, which by the way has a 20:9 aspect ratio. And the 5-megapixel front camera. At the back are the dual-camera setup and the fingerprint sensor. At the top is a mic hole and the 3.5mm audio jack, the bottom features the micro-USB port as well as another mic hole and the single downward-firing speakers. On the left is the sim tray and the dedicated Google Assistant button, and on the right is the volume keys and the power button.

The Nokia 2.4 is powered by a MediaTek Helio P22 processor paired with 3GB of RAM and 64GB of internal storage. Storage is expandable via a dedicated MicroSD slot. The P22 is already a two-year-old chipset, but don’t let that fool you; this octa-core chip paired with stock android, makes this phone is still fast and can compete with some of the newer models in the market.

As for the camera, it sports a dual-camera setup at the back. It has a 13-megapixel main shooter and a 2-megapixel depth sensor. At the front is the 5-megapixel selfie camera.

The Nokia 2.4 is powered by a 4,500mAh battery which typically lasted my two days of usage. Charge time is a bit long taking almost 4 hours via the MicroUSB port.

You need to temper your expectations a bit for the Nokia 2.4. This is a budget mid-ranger and for that price, you are sacrificing some quality of life found on the higher-end models, such as more camera lens, and a more vivid display.

The biggest draw of the Nokia 2.4 is the stock Android OS courtesy of the Android One program. Despite sporting an older processor and GPU the phone still feels fast and snappy. The 3GB of RAM is still enough to run multiple apps and do some multitasking, and the 64GB is pretty much enough to last you if you don’t take that many photos or download a load of apps on your phone.

Still, despite the optimization of stock Android, the processor does take a hit in gaming. I tried playing Call of Duty: Mobile and that the maximum graphic setting for the phone is just the low settings still the game compensated by running smoothly and without any fps drops. League of Legends: Wild Rift was a bit smoother on the phone but was only able to handle up to medium resolutions but only up to 40 to 48fps.

The camera is a bit of a hit and miss for me. Outside shots came out sharp but somehow the colors were a bit duller for my taste. For indoor images, it’s just decent and nothing to writing home about. Images were noisy at times and smoothed out some details. As for the selfie camera, I found it to be not the greatest. The images came out smudgy even in well-lit environments and extremely noisy in low light.

The last thing to note about the phone is that battery life is pretty good. The phone lasted a good two to two and a half days of light to medium use (a bit of gaming and movie streaming). But the charge is equally long, taking more than three hours based on my experience.

Coming it at PHP 6,990, the Nokia 2.4 sits at the perfect spot for value. You have the trusted Nokia branding paired with the full Android One supports which offers free security and OS updates for at least 2 two years.

The Nokia 2.4 carries on Nokia’s brand of value for money phones.

The Nokia C1 Plus, a more affordable 4G

HMD Global, the home of Nokia phones, has launched the new Nokia C1 Plus, the lowest-priced 4G Nokia smartphone yet.  The Nokia C1 Plus elevates...
Read more

Since the Samsung S Series was first launched in 2010, it has set the standard for devices that provide a groundbreaking experience for those...
Read more

OPPO will redefine the Internet of Experience in 2021

In his new year message, Tony Chen, founder and CEO of OPPO, notes that the company will continue its journey of exploration to become...
Read more

Concern about dental hygiene is part of my OCD complex, and I do go through an elaborate daily routine of oil-pulling, brushing with an...
Read more