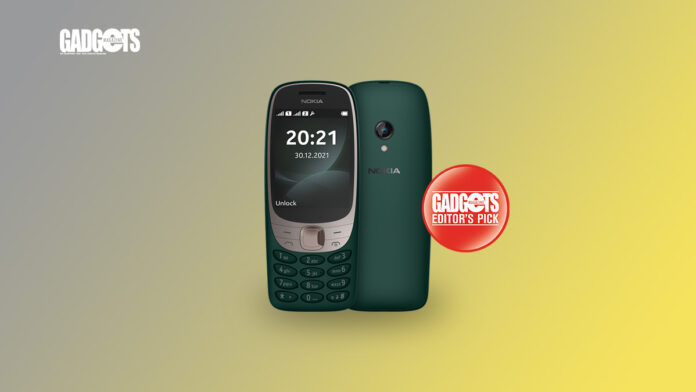 One of the first phones I ever had the pleasure of using was a Nokia, it was the predecessor of the Nokia 6310, the Nokia 6210. But in celebration of the 20th anniversary of the iconic 6310, Nokia has re-released a new modern 6310, and honestly, I am excited to try it out.

As Nokia’s homage to the original 6310, the new 6310 has some striking similarities. The massive forehead (for a lack of a better term) gives the new 6310 the feel of the original and of course a bit of nostalgia. The navigation is also a bit similar except now the middle navigation button has left and right and a middle button to enter, whereas the original only had up and down. Nokia has also added some new colors to the new Nokia 6310, ours came in the Dark Green color.

On the front of the phone, you’ll find the revamped 2.8-inch QVGA display which by default has a large font setting. You’ll also be greeted by the keypad, which unfortunately for me needed some time to get used to again. Once I got the hang of it, nostalgia also kicked in. Now the biggest addition to the new Nokia 6310 is the 0.3-megapixel rear camera and an LED flash. Another is the micro USB charging port beneath the device along with the earphone jack.

There really is much to say about the Nokia 6310’s hardware. The device is a feature phone with mobile data capability. At the center of the phone is a Unisoc processor. It has up to 16MB of ROM, with expandable storage of up to 32GB via MicroSD.

Like the feature phones of old, the Nokia 6310 (2021) has a removable 1150mAh battery which is rated to last up to 21 days of standby time or up to 18 hours of talk time. The 0.3-megapixel camera at the back isn’t really something you’d want to use. If you need to take some quick shots for memo purposes it can do the job, but I wouldn’t recommend using it to capture your precious memories.

It has been a while since I tried a feature phone and I needed some time to get used to it. Like I said, after using Qwerty for so long I’ve forgotten how to use a keypad. There’s also the matter of online connectivity. The Nokia 6310 has a mobile data connection, which is nice but the speed wasn’t 5G, nor even 4G.

Though I wouldn’t discredit the phone based on the lack of normal comforts. I actually found it refreshing and couldn’t help but reflect on what we now take for granted. Surprisingly, there’s also Bluetooth on the Nokia 6310, which you can use to connect your earbuds or just for plain old file transfer like the good old days.

After spending some time with Nokia 6310 and getting used to its navigation and typing, the device is pretty straightforward to use. Its larger screen and bigger font are a great touch, especially since I envision senior citizens using this phone more than my age group.

There are a lot of other nostalgic features on the 6310. There’s an FM radio. (Remember when we had these over Spotify or Apple Music?) But undoubtedly the most sentimental aspect is Nokia’s iconic, Snake Xenzia game. I remember spending a lot of time in my childhood days trying my best to reach 500 on the hardest level.

At its core, the new Nokia 6310 isn’t a smartphone, it’s a celebration of a highly iconic phone albeit with a modern twist. I can see this device as a secondary unit for when you’re outside or for your grandparents who just can’t comprehend the complexity of the smartphone. It does what it’s supposed to do — call and text. I do hope that some day Nokia would consider making “smart” remakes of its iconic devices

Coming at PHP2,490 the new Nokia 6310 has a unique place, price-wise. It’s not a phone for everyone. Sure, it isn’t smart; in fact, it is far from it. What it offers is functionality, and maybe a bit of nostalgia for an owner of the original. If you need a backup phone, or an emergency phone in your go bag, or are in need of a bit of tech detox, then the Nokia 6310 is right up your alley.

A definite blast from the past.