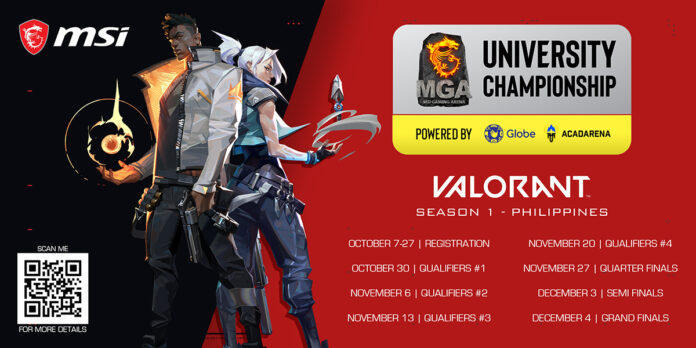 The MSI Gaming Arena (MGA) University Championship has spanned the countries of Thailand, Malaysia, Singapore, Vietnam, Indonesia, and now the Philippines. The tournament aims to recognize the emergence of esports in the country and promote the importance of camaraderie among universities even without face-to-face engagements.

MSI, a world leader in gaming, content creation, and AIoT solutions is bringing its gaming arena closer to students in the Philippines with its first University Championship. Filipino esports fans, gamers, and enthusiasts will be able to witness the intense battles between collegiate teams in Riot Game’s popular first-person shooter, VALORANT. The tournament will run from October 30 to December 4, but registration already started on the 7th of October.

“MSI together with AcadArena, ESL Gaming, The Gaming Company, One Up esports, Riot Games, and VNG are proud to bring the heat and thrill of gaming experience among universities in the Philippines,” said Jessica Chen, general manager at MSI Philippines. The program will adhere as closely to local school schedules as possible. “We highly encourage the students to join the fun and the spirit of competition, hoping this could relieve a bit of their stress from the ongoing pandemic and online classes,” she added.

Bringing MSI’s Gaming Arena University Championship to the local scene, the event will be powered by the Philippines’ very own Globe Telecom. This partnership is also made possible with AcadArena, the leading organization for Campus Gaming and Esports Education in the Philippines and Southeast Asia. Through these collaborations, the audience and players alike will have a seamless and thrilling experience.

Each country’s Championship will be independent to best serve the player base. Here are the Philippines’ championship dates:

This isn’t just an everyday rank game on VALORANT, as MSI brings to the table a prize pool of PHP200,000 for the emerging winners of the first-ever Philippine University Championship along with other special prizes.

Get to know more about the tournament, visit https://www.msi.com/Landing/MGAUniversityChampionship.