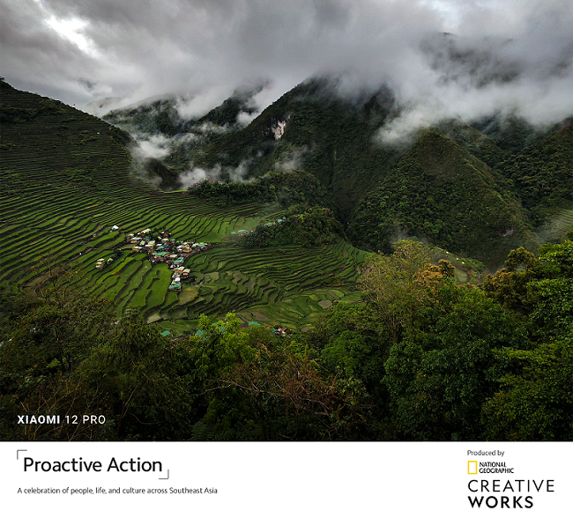 In its ‘Proactive Action’ campaign, Xiaomi brings together four visual storytellers across Southeast Asia to share their passions and stories with the latest Xiaomi 12 Series. Produced by National Geographic Creative Works for Xiaomi, the celebrated photographers document and raise awareness of causes close to their hearts. Told from a local perspective, Gab Mejia from the Philippines, Annice Lyn from Malaysia, Sirachai “Shin” Arunrugstichai from Thailand, and Linh Pham from Vietnam, will share visual stories to create interest for the social, cultural, and environmental themes close to their heart.

KM Leong, general manager for Southeast Asia of Xiaomi International shares, “We are excited to be collaborating with National Geographic Creative Works on this campaign as we celebrate the people, lives, and cultures in Southeast Asia. Dubbed as the premium flagship of Xiaomi, Xiaomi 12 Pro can beautifully capture the visual stories of each explorer that will be a part of this campaign with its pro-grade triple 50MP camera array, complemented by Xiaomi’s advanced AI algorithm. We look forward to seeing how the featured National Geographic Photographers will master every scene.”

The Proactive Action campaign will feature a series of photos and a short video to highlight the different themes chosen by each explorer, where the Xiaomi 12 Pro will put in tests of its triple 50MP pro-grade camera lenses, highlighting especially new features such as ProFocus and Ultra Night Video.

Gab embarks on a journey to document the cultural and natural aspects of the Mountain People of the Cordilleras (the highest mountain range in the Northern Philippines), as well as to highlight the theme and importance of cultural and natural heritage preservation in his Proactive Action series.

Annice documents the work of the Wayang Kulit master, traditionally known as puppet shadow-play. Capturing behind-the-scenes moments of the tradition, the craftsmanship of making the various puppets, and the performances. Annice hopes to share the social and cultural importance of bringing families and communities together raising awareness of this art form, whilst preserving it for the future generations to come.

Shin explores one of the largest remaining mangrove forests of eastern Thailand at Prasae Estuary. Capturing the successful results of conservation efforts that prevent the degradation of this natural wonder and head toward the path of recovery. Shin portrays the rich biodiversity of this place while also showing the intertwining relationships between the local community and its rich natural resources.

Linh gets to know Ho Chi Minh City’s cultural riches by exploring its hidden corners not found in travel guides. Using his senses and keen eye to look beyond the mundane, Linh ventures through an unnamed coffee shop under the bridge, a museum with million-year-old specimens, a charming neighborhood blended with Vietnamese and Chinese heritage, and a peaceful fishing island with the hope to preserve the city’s legacy and share it with the world.

Celebrating life and culture in SEA

As part of the campaign, Xiaomi will be holding a photography contest called Xiaomi Photography Academy: A Celebration of People, Life, and Culture across Southeast Asia for those who want to showcase their skills and share the fascinating parts of their lives and culture. The photo contest runs from May 14 until June 14, 2022, and is open to individuals who own a Redmi or Xiaomi phone. Participants are encouraged to take the best photos that represent the theme.

A Xiaomi Smart Package (Mi TV P1 55″, Mi Soundbar, Xiaomi Watch S1, Mi Standing Fan 2) is up for grabs for the Grand Prize Winner alongside being named as a Xiaomi Photography Ambassador. Four consolation prize winners will be named and will take home Xiaomi Buds 3.

Winners will be announced on June 17, 2022. For more information on the terms and conditions of the contest, stay tuned to Xiaomi Philippines social media pages.

Learning to Master Every Scene from the Masters

Photography enthusiasts who want to learn from the master can get hands-on experience during the Xiaomi Photography Academy Masterclass to be held at the Masungi Georeserve on May 14, 2022.

The free-to-enter masterclass is open for all Xiaomi 12 Series users and they will get a chance to meet and learn from Gab Mejia, a National Geographic Photographer, who has been using the Xiaomi 12 Pro to take scenic photographs. Participants of the masterclass also stand a chance to win a Xiaomi Mi-stery Box after the program.

This is the first time where Xiaomi works with National Geographic Creative Works in Southeast Asia to produce illuminating work through the lens of Xiaomi 12 Pro.

For more information on the collaboration with National Geographic and Xiaomi 12 Series, please stay tuned to Xiaomi Philippines Facebook Page.

Feel safer for longer with the new Nokia G21

All-New OPPO A96, designed to be powerful

This laptop has multiple-security functions including a built-in tracker