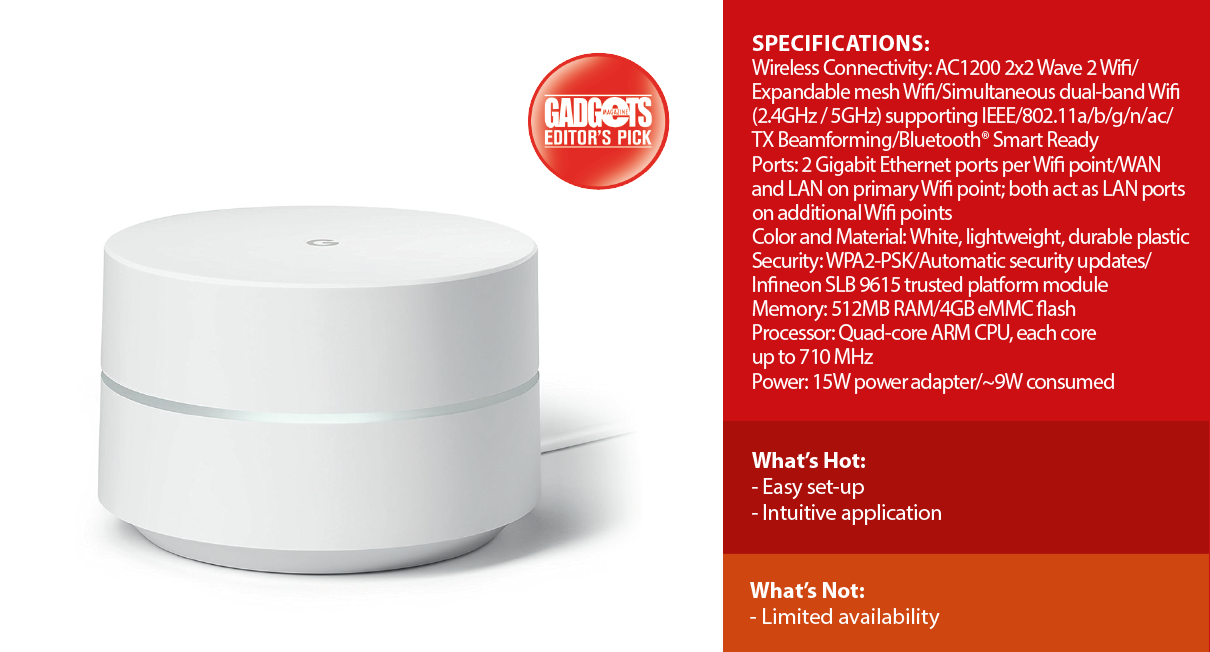 Internet in the Philippines isn’t the greatest; speeds are mediocre at best, they vary across destinations, and signal strengths could use a boost. To make matters worse, if you live in a house that’s over 100 square meters with rooms separated by thick walls, a stable connection throughout your abode with a regular router is nothing but a pipe dream. Google wants to end these woes with the Google Wifi.

The minimalist design of the Google Wifi fits any space remarkably. Its components are protected by white, dense, and durable plastic shell, with an LED accent light strip that wraps around its midline. You can buy one pack or a set of three, depending on the measure of your space. In the Philippines, however, it is only currently offered through a PLDT internet bundle.

The package contains the hardware, or as Google names it, Wifi point, a power adapter, a 2 m ethernet cable, and a quick setup guide. The Google Wifi point has a single button smack-dab in the middle for powering it on and hard resetting. Underneath, it shows two gigabit ethernet ports and a USB-C port.

A single Google Wifi unit is powered by a quad-core ARM CPU with 512 MB of RAM along with 4 GBs of eMMC flash storage. It has AC1200 supported by two by two wave 2 Wi-Fi, simultaneous dual-band Wi-Fi, namely 2.4 GHz and 5 GHz, TX Beamforming enabled, and is Bluetooth Smart Ready. The latter enables it to serve as a hub for compatible smart devices in the home.

The Google Wifi is so easy to set up that even your non-techie aunt could have it up and running with minimal assistance. The primary point is to be connected to your ISP or modem, plugged into a power source, and connected to the Google Wifi app. Once it’s on and you have the app running, the latter will automatically identify the new hardware and have the user scan its QR code or enter its serial number. It would take just a few minutes for the app to connect to the router. A successful connection will prompt you to pick a label for the Wifi point, e.g. bedroom, living room, office, etc. You’ll then proceed to naming it and giving it a password, no complicated web-based configuration pages to navigate. The same process applies when adding a new Wifi point, wherein the mesh networking really comes into play.

The app allows you a variety of functions. It lets you see devices connected to a Wifi point, give bandwidth priority to a device, pause internet connection, let’s say to a child’s device, monitor internet speeds remotely, add Wifi point managers, identify weak spots, and more. What’s great about Google Wifi, is that wherever you are at home, it connects you the best possible network, eliminating delays when streaming content or whatever you’re using the internet for.

During my time with this router, networks drops were minimal, and were probably only problems concerning my ISP. Internet speeds were normally how it is with my usual home Wi-Fi, but seeing the bandwidth consumed by devices connected to the network was convenient. I could tell who’s streaming Netflix and prioritize my device instead (lol).

Google Wifi is a mesh network system that’s easy to use as it is simply designed. For large homes and offices, this device is the solution to internet dead spots and connectivity management.

No more internet dead zones with this one.

The laptop is an indispensable tool in this era. Whether you’re working at home, and want to move around, or are already out and...
Read more

A change of scenery can do a lot to kick one’s creative brain into gear. For that to happen, you need a good laptop. DESIGN:...
Read more

When I was assigned the Lenovo Legion Y740 last year, it was undeniably one of the best for 2019. A year later, Lenovo has...
Read more