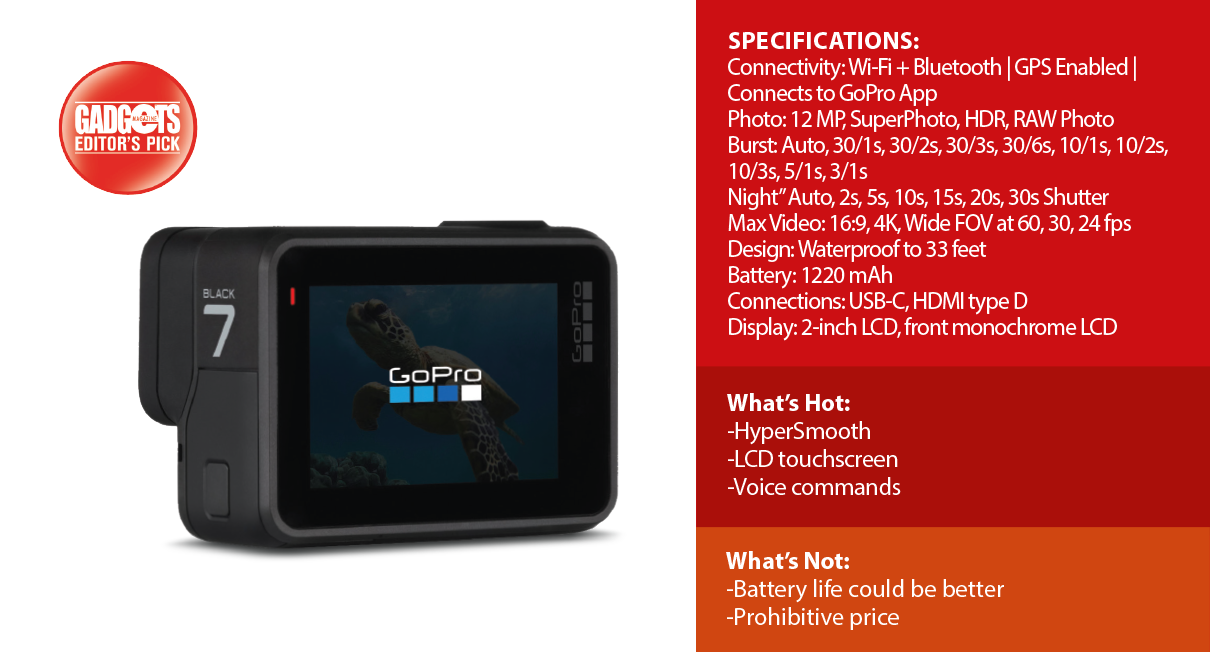 GoPro has achieved what few others in their markets have. Early dominance in the action camera segment has cemented the brand as the go-to name in their category. While the last few iterations have just been refinements on the same device, some real change has come with the Hero 7 Black, and the amazing trick it has up its sleeve.

The Hero 7 Black keeps the same profile GoPro has maintained since its departure from the straight-edged, hard-cornered exterior of the Hero 3 days. It’s more curved, a tad larger, and comes in a flat shade of gray, and a matte finish. Buttons are down to one for the shutter, and another for power, while the SD card slot and battery compartment share a door separate from HDMI output and USB-C charging.

Being at the cutting edge of action camera technology, GoPro spared no tech with the Hero 7 Black. 4K video recording at 60 FPS is the main thing here, as well as 12 MP stills at 30 FPS. A large, 2-inch touchscreen LCD makes selecting functions as simple as using a smartphone, and since the entire camera has been made water- and dust-resistant even without a case, you won’t really have to add much more to its 116 gram weight should you want to mount it on your gear. Wireless connectivity allows you to livestream video, and voice control means you can do it without having to fiddle with buttons. And then there’s HyperSmooth, which is so awesome, we’ll have to come back to that later.

I’d been using action cameras since I got a Hero 3+ Silver when it first came out. They were quite spartan back then, but did the job, so I didn’t really complain. Still, there were some things I hoped would change in later iterations. Now, maybe five or so years later, we have the Hero 7 Black, and I have to say right off the bat, it’s impressive.

Since it has a touch screen, navigating through functions, previewing shots, and general fiddling with the camera is dead simple. This had always been a huge pain point for small action cameras, so the screen is something I appreciate immensely. The design retains the monochorome LCD status display on the front of the device, so you can figure out what’s going on at a glance. When I did a long ride with Suzuki, this proved indispensable, as I would often lose track of what I was doing, and have to check if I was still recording or not. A quick mirror check gave me the GoPro’s status, and I could ride on.
Another thing I appreciated was voice control. With the GoPro mounted on my chin, I could simply tell it to start or stop recording, and it would get it practically every time, except when I was traveling fast enough for the wind to interfere. I was pleasantly surprised to find that it was actually useful, and not a mere gimmick. Good job, GoPro engineers.

Generally, this GoPro gives about what you would expect from an action camera of its pedigree. 4K video at 60 FPS is a sight to behold, and if you have the hardware to edit it, the results are glorious. I’ve always been a fan of the kind of videos the brand has made possible, and the Hero 7 Black further cements this. The colors, which were a little washed out in the older versions, now come out beautifully, thanks in part to better hardware, as well as HDR optimization. Audio was likewise solid—the camera was able to cut out the wind noise and pick up the Queen medley I was belting inside my helmet. Little can be done about my singing, but in terms of audio quality, it was spot on. Weight, an issue for anything you’re going to mount on your helmet, was acceptable. I did feel it there, but it wasn’t causing me to strain my head much more than my modular helmet does anyway.

No doubt the biggest feature of the new Hero is HyperSmooth. I have no idea what kind of spell they cast to make this happen, but I found it to be exactly as advertised. I ride an electric kick scooter to work, and while it does have pneumatic tires, it doesn’t have any suspension. Every bump on the road goes straight through my spine, to my skull, and while my kidneys might be taking the brunt of the force, the Hero 7 Black just doesn’t seem to care. When users reported gimbal-level stabilization, they were right. This alone is reason enough to score a Hero 7 Black, even without factoring in the fact that the video quality is significantly improved over the previous model. HyperSmooth is the feature that makes this camera great. This is all for the best since I couldn’t, for the life of me, find a way to disable the feature.

Battery life, another major concern for action cameras in general, is decent. With enough juice on a full charge to run about an hour and 45 minutes, which should be adequate for most user demands. Any longer and you’ll have to invest in batteries, which is just the way things are. Dropping video quality will probably help with this somewhat, so pick your resolution and framerate well, if battery life is a large issue for you.

While the SRP of the Hero 7 Black is steep at about PHP 25,000, what really makes it great is HyperSmooth. There really isn’t anything out there that is able to do this. Add to this the superb video quality the camera can do on its own, and you have the recipe for the best action camera you can get your hands on right now.

If you use the action camera to capture real action, this is the one you need.