Sony has been a household name since I can remember. One of the first products of theirs I remember owning was the iconic Discman which, at the time, made me the coolest kid on the block. Since then, the company has grown its portfolio of audio devices even more. Just recently, they added another revolutionary wireless speaker to their lineup, with impressive results. It’s bigger, better, bolder, and more bassy.

Unlike other compact Bluetooth speakers available in the market, the latest addition to the Extra Bass series of Sony comes in a rectangular 11.5-inch body covered in a tight fabric mesh. Given its dimensions, the speakers are the biggest in its class, and a metal Sony logo still remains on the bottom front of the speakers, as it has in previous generations. The top part reveals basic controls like power, play, pause, and volume, as well as the direct Live Mode button and Bluetooth indicator. When turned on, it brings the RGB LED strips on each side to life, along with the remaining lights around and on the side of the drivers, adding to its impressive aesthetics. Underneath its body is an easy grip pad which is very useful for either holding the speakers in one hand, or keeping it stationary on any surface. On its back lies a rubber flap that hides more of the special functions that this special audio device has.

Built for toughness, the XB41 brings the fun to your pool and beach parties with its IP67 rating. That means the speakers are both dust-resistant, and waterproof up to 3 feet deep, which is great, particularly given its size. And since this one’s full-range, it has two large 58 mm drivers that define the word “extra” in the world of portable speakers.

Lifting up the protective rubber lid on the back reveals the important connectors like the micro-USB port and 3.5 mm stereo jack for inputs, and a USB-A port than can charge your devices. Above are the three buttons which reveal its top features. There’s the battery button that tells you remaining power, a WPC button that enables you to daisy chain the XB41 to other ones via Bluetooth, and the ADD button which lets you use two speakers simultaneously.

Let’s talk about its aesthetics. As soon as I hit the power button, the XB41 caught my attention with its bright RGB lights. And when I decided to put it to the test, I was amazed by the mesmerizing synchronization of lights with the music that I play. The same goes when I tested it out for streaming videos. It’s both a visual and auditory feast, thanks to the Fiestable app that customizes the colors of the lights according to your mood. You can even be a DJ for a night with the cool sound effects provided in the same app, along with Sony Music Center. All you have to do is to shake your phone or the speakers in certain directions to activate Party Booster mode. Using it can be quite tricky, though.

Another little trick that Sony included is the NFC connectivity that offers quick pairing and adds even more convenience. Its solid bass performance is incredible, and we highly suggest this device if you love hosting parties. If you want to go traditional, you can connect the speaker to a source via a 3.5 mm audio jack. Apart from this, the Wireless Party Chain and Add Speaker functions are things that would catch your attention. Unfortunately, the features are only exclusive to Sony audio devices so you’ll need to have compatible wireless speakers from the brand to enjoy both.

To be honest, the Live mode did not meet myexpectations. For me, it actually interfered with the audio quality, even for casual listening. The real strength of the device though, is the battery life. According to the manual, it can give up to 24 hours of music playback, but in use it gave an impressive play time of two and a half days of standard, extended play. Once its battery does get drained however, you have to charge it for five whole hours.

Top-notch Bluetooth speakers don’t come cheap, but this mid-ranger justifies its price. Getting an NFC-enabled speaker, with high-powered bass drivers and long-lasting battery life, is a stretch for the price range. Trust us when we say, the Sony SRS-XB41 is great bang for the buck. 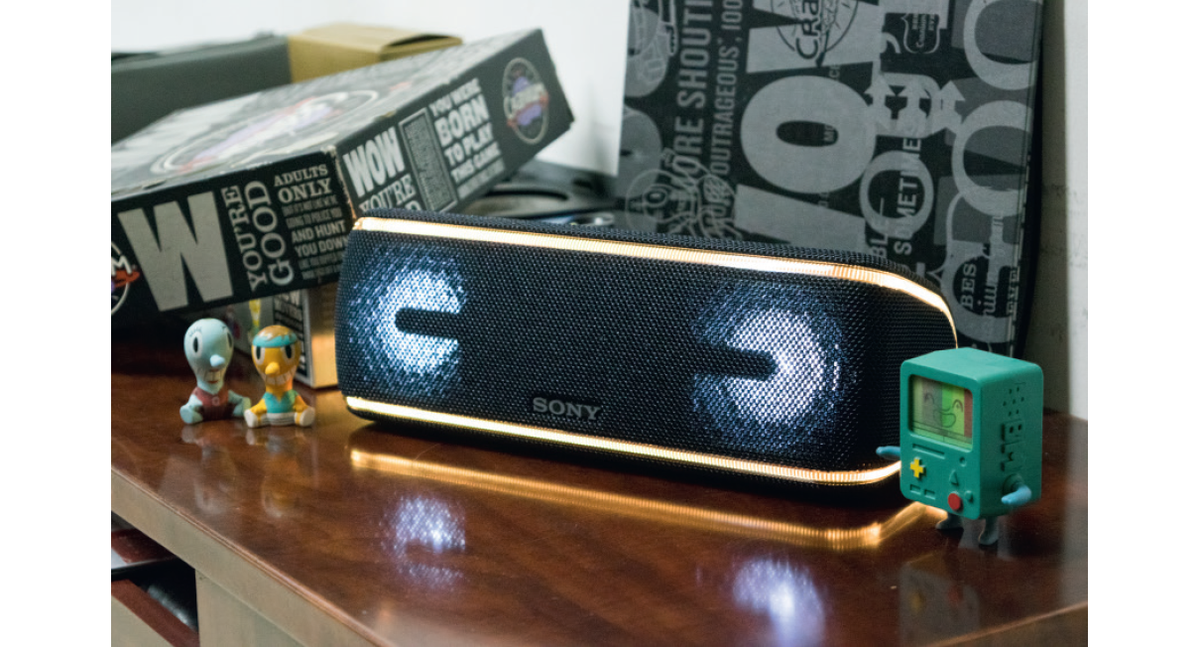 This speakers drop the bass, in a big way.