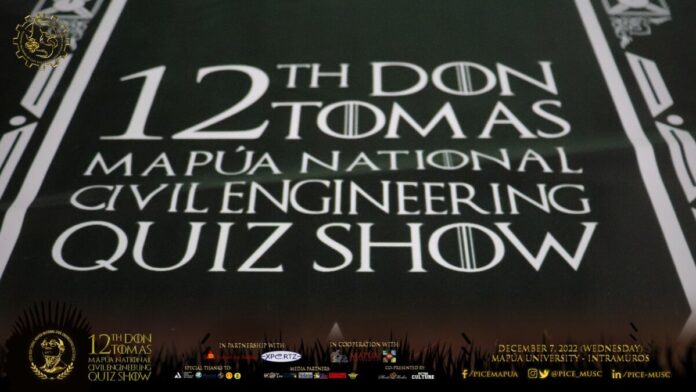 Behold as the winds of winter, the battle for the Iron Throne has finally pinnacled, marking the end of this year’s 12th Don Τomas Mapúa Νational Civil Engineering Quiz Show held last December 7, 2022. May this ignite the blaze of courage for academic eminence!

As the great battle for the Iron Throne ceases its burning embers, a new dawning has shone that is genuinely a marvelous moment to remember.

As the War of Conquest commences, the participants readily take on the Written Qualifying Rounds, where the participants’ wits and intellectual capacities are tested in a written examination. From a total 70 registered participants, it was reduced to 31 qualified participants, of which the bottom two were subjected to a clincher round to break the tie for the 30th spot. However, after a series of questions, it is unanimously decided to let them both compete in the next round, which is the elimination round. From the said round, 20 qualifiers will be chosen. Yet, another clincher was conducted to break the tie among the three participants, wherein Joshua Olivenza from Batangas State University – Alangilan prevailed over them. Although a semi-final round was prepared, the qualifiers went straight to the final round due to time constraints.

Nevertheless, the intensity of the battle never wore off, resulting in a clincher battle for third place between Jhazmine Sonio of Technological Institute of the Philippines – Manila (TIP – Manila) and Nancy Valle of Camarines Sur Polytechnic College, which Sonio won. The final standing of the scores determined the top qualifiers. Hailed as the champion is Renz Mark Santos from Don Honorio Ventura State University, followed by Justine Jonoras from Sorsogon State University, and lastly, Jhazmine Sonio from TIP – Manila. The top 3 placers will receive a full scholarship from Xpertz Review Center, whereas the 4th and 5th placers will be granted a half-scholarship.

With this, the PICE – MUSC is ecstatic and genuinely grateful to everyone who made this possible and contributed to the success of the 12th Don Tomas Mapúa National Civil Engineering Quiz Show.

The panel of judges: Dr. Michael B. Baylon, Engr. Roma L. Semaña, Engr. Ivan D. Marquez, Engr. John Kirt R. Baguio, and Engr. Vincent D. Cagampang, we are profoundly thankful for guiding the participants to endless possibilities of choosing the direction to bliss and unparalleled excellence as civil engineering students. We are genuinely entranced by how you directed and steered the scholastic capabilities of our contestants toward eminence.

To the quizmasters, an aspect of the event that represents strength and courage in battle, we owe you the success of inlaming the embers of cognitive resilience and grit of our contestants whom you guided patiently and accordingly.

To the ushers, who actively assisted the contestants throughout the course of the vent, we are indeed in our utmost gratitude for your unwavering service in obliging our dear participants until the end of the battle.

To the contestants, who have shown great willingness and fervor for the events with a total 70 registered participants fro 16 participating schools and universities nationwide, you have not only paved the success of this quiz show but displayed the true act of excellence by taking courage and be a representative of many. We hope to see you again once a new battle awaits!

To the diligent viewers with 5.8 total Facebook Live views from the DTM Page, we sincerely appreciate your active engagement and support all in accord that paved the way to ignite the event’s thrill and success.

And to the organizers who willingly and devotedly prepared, managed, guided, and led the event to triumph, no amount of words can express gratitude for taking on the conquest to begin a remarkable legacy for others to follow in more years to come.

The PICE – MUSC is also delighted to have the following partners and spoinsors for their outstanding cooperation and willingness, which makes this 12th Don Tomas Mapúa National Civil Engineering Quiz Show more compelling for the participants.

And with the end of the great warfare, the conquest of which everyone dared, go forth and blare, for this is only the beginning of a great legacy one must prepare.