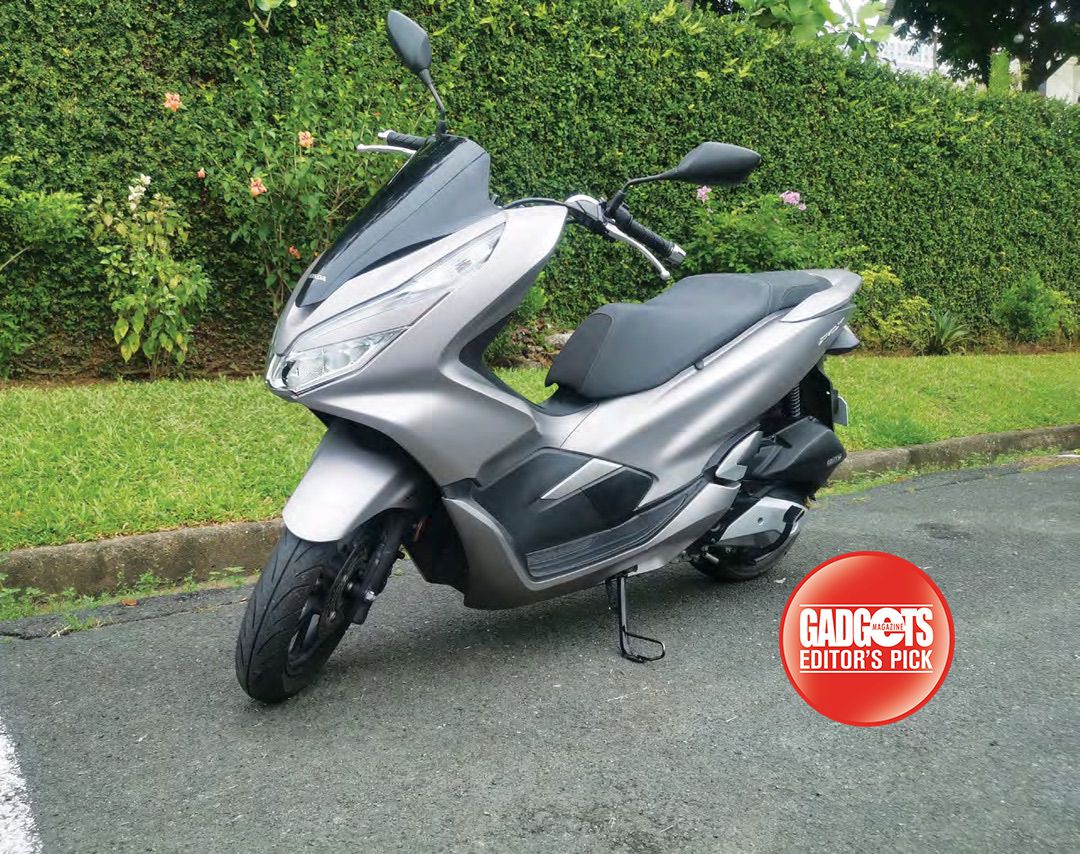 There’s nothing quite like the experience of riding a large, four-cylinder bike down a stretch of twisty mountain road. Take that experience back down to the city though, and you’re likely in for a world of hurt. Here, in the belly of the city, the twist-and-go convenience of the scooter has no equal. Honda lent us the PCX 150 for a few weeks to try out and let you know if this is the city-scooter for you.

The PCX 150 is a scooter that has a significant amount of meat on its frame. At 30 inches wide, it’s chunkier than a lot of the scooters and underbones you’ll encounter on the road. This wider stance gives it a fair bit of presence on the road, making it look a bit more imposing, or at least as imposing as a scooter can get. The face of the PCX is tall and wide, with large lights and quite a tall windscreen. This all gives it a rather front-heavy appearance that polarized people I spoke with. I happen to be on the camp that likes the look, particularly in silver.

The scooter has a split step board that’s interrupted in the middle by the body of the bike, keeping your feet apart while riding, and contributing to that wider feel. The lines of the PCX sweep gently up from the bottom of the scooter all the way up the seat, to the grab bar at the tail. This bike has a very curvy, organic look to it—there’s not a sharp angle to be found anywhere. It’s a nice departure from all the points and angles we see on scooters now, and something that I’ve come to appreciate.

The powerplant is a single-cylinder, four-stroke 150 cc engine. This is mated to an automatic transmission for twist-and-go convenience. The engine produces 10.8 kW of power and 13.6 Nm of torque at 8500 rpm, which is plenty to move the scooter’s 131 kg curb weight. Braking is handled by a single front disk brake with ABS, and a rear drum brake.

There are quite a number of creature comforts with the PCX, not the least of which is a keyless starter. You simply need to keep the fob on your person, turn the switch, and hit the ignition. No more fumbling with keys in the dark, with gloved hands.

There’s also plenty of under-seat space–enough in fact to store my whole helmet, gloves, and raincoat, so I can go places and not have to worry about lugging my lid around. There’s also a small compartment with a standard automotive 12 V lighter socket to keep your small items safe while you’re on the road.

With my usual bike in the shop, I welcomed the opportunity to use the PCX for a week. From the moment I first straddled the scooter, I felt that it was something special. The extremely wide, stepped seat gave me a great seating position, it was low enough to be able to tiptoe, and despite its size, more than easy enough to walk into place. It’s a very approachable bike that is much easier to handle than its size might lead you to think.

Getting on the road, you can really feel the pull of the 150 cc engine. There’s little delay between the twist of the wrist and putting copious amounts of asphalt behind you. That being said, the throttle is on the sensitive side, so newer riders will want to take a little care feeding that power to the wheels. There was also quite a bit of slop in the throttle, with no way to take up the slack.

Brakes on the bike are totally solid. There’s a lot of power available to the rider, and there’s a bit of weight to the scooter, but thankfully, the brakes are up to snuff. They bite rather quickly, and don’t have racebike feedback, but they’re plenty adequate for driving around the city. The inclusion of ABS also adds a significant measure of safety in critical braking situations. In a nutshell, they’re brakes you won’t feel iffy about relying on.

Night-time riding is made a little safer, thanks to LED headlights that cut through the darkness extremely well with their cool, white beam. The throw is just right, allowing you to see far enough ahead, without sacrificing close-in light to identify and avoid smaller obstacles.

According to the well-illuminated, easy-to-read all-digital dash, fuel economy on the PCX was somewhere around 43 km/l that wasn’t at all bad considering the kind of riding I was doing on the thing, and the size of the engine moving me along. Fuel injection is definitely a factor in the bike being able to deliver great fuel economy.

The sticker price on the PCX 150 is PHP 133,900 according to the Honda Philippines website. For all the features, massive boot space, and that smooth, powerful 150 cc engine, it’s well worth the price of admission. It’s a lot of fun, practical, and has great fuel economy, which is really all you want from a commuter.

– Slack in some of the components
– No brake hold

This is honestly the most fun scooter I have tried in a long time.

Review and photos by Ren Alcantara