What’s in your bag, Carl the survivor

Life today is hard enough for a kid without having to deal with the collapse of human society and the zombie menace. Being a young survivor in a world overrun requires a particular set of skills, and rock-solid determination. Of course, some useful gear would help a lot as well. Here’s some gear you might find in the bag of someone like Carl of The Walking Dead.

The bag
You’re going to want to get a bag that’s tough, but not overtly “tactical,” in the conventional sense. Something obviously military-issued or the like will attract unwanted attention to the level of preparedness of its bearer. You really don’t want to be a target of a mugging when there’s already so much to be worried about in the world outside. A lot of travel bags have plenty of room, durable materials, and sturdy construction, while keeping weight down. There are a lot of options out there, but something with sturdy fabric, maybe 400 denier nylon, if you can find it, would be a good start. Lots of internal storage space, maybe 30 liters so you don’t go over the top with cargo, and a few internal and external pockets would be good. Should you need additional storage, external loops and carabiners do wonders for short hauling. Keep the pack simple, make it look harmless, and you’re on your way.

A knife
You’re likely going to have a folding knife in your pocket for all the little tasks that need a pointy end or sharp edge, but for anything more heavy-duty, you’ll want a knife that can take a beating. A fixed blade is something that’s a necessary part of hard outdoor living, and for our fledgeling survivor, we want a durable working blade that could be used as a weapon whether against a four-legged, two-legged, or shambling predator comes to visit. Something large, but not over-the-top, with maybe a five- to seven-inch blade, with a beefy thickness at about a quarter-inch, and full-tang construction for durability would serve well. A plain edge from tip to heel will also be both easier to maintain, and catch less while working.

A monocular
We would have suggested binoculars, but if you’ve only got one eye to spare, get a monocular instead. Ideal for gathering intel about an area, observing locations, and generally knowing what you’re about to get into long before you get there, this is a great tool to let yourself be ready. Choose a monocular that balances weight and size with the magnification and lens size. Monoculars will have a key pair of numbers associated with them. Usually a number X another number, so 16 x 40 for example. The first number tells you the magnification, while the second tells you lense size. Larger lenses mean clearer, wider fields of view, but also increased weight and price. Find the balance that works for you, and take it with you each time you venture out.

A light
We aren’t really equipped for the darkness. As such, we need to bring our own light sources with us. A little apocalypse isn’t going to change that. Our survivor is going to need a light with easily replaceable batteries, able to survive the rigors of everyday use in a harsh, new world. Our hero would likely have a light that accepts the most common battery types—ideally AA, which can be found in remote controls, wall clocks, toys, and drugstores all over the world. It might not have the same output as specialty cells, but good luck finding anything other than AA cells when the shelves run dry. A nice clicky switch with momentary on will be great for quickly lighting up a spot and changing locations, so foes won’t get a bead on you, and a lanyard loop makes sure you won’t lose your light unless you want to. 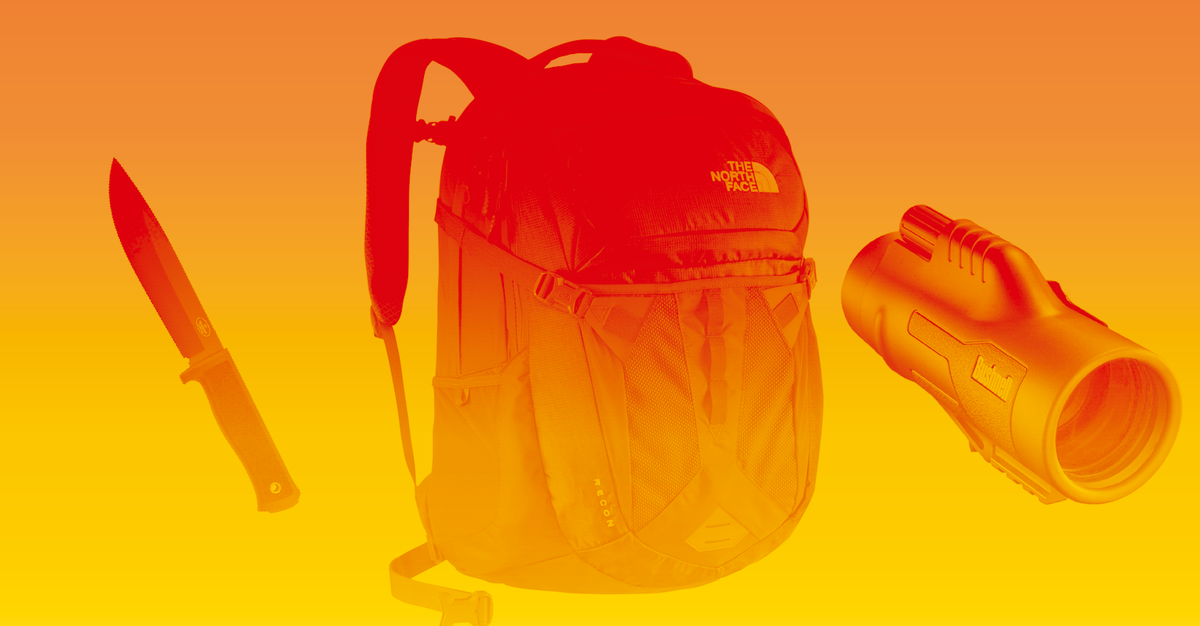 A small survival kit
Sometimes things happen. You might get lost, or you could get separated from the group. Rather than having to make do with what you find, you should have the skills and materials to make your way back. A small survival kit with some basic hardware can help with that. A way to make clean water, like a filter or even some iodine, a signaling device such as a whistle, a way to easily start a fire, and some basic medicine to fight pain, infection, or a bad stomach, as well as materials to treat minor injuries might be all that keeps you going when the going gets difficult. Our hero would also already have the knowledge necessary to use the items available.

Some quick energy
Chocolates, candies, nuts, some jerky. Supplies might be hard to come by, but it’s always a good idea to have some ready. Weather, injury, or some other unplanned occurrence might keep you in one place for longer than you originally anticipated, and there might not be anything to scavenge nearby. You might be on a long walk, and need an energy boost. It’s always better to keep your energy up than start to weaken and have to play a game of catch-up later. You might not always get the chance to do so.

Comms
Mobile phones are great, but they rely too much on a lot of complicated infrastructure to keep them going. Small CB radios are an excellent way to keep in touch with your group, even outside of sight lines. Information shared makes everyone better equipped to handle changing situations, and allows plans to be synchronized and executed effectively. Even today, inexpensive options that are enough to get the job done, exist at online retail shops. Pick one that’s small, keep it charged, know your channels, and keep it handy.

There’s a lot to consider when you’re one of the few survivors of an apocalypse, and while knowledge and determination are the most important things to have, the right gear certainly makes the whole ordeal easier.