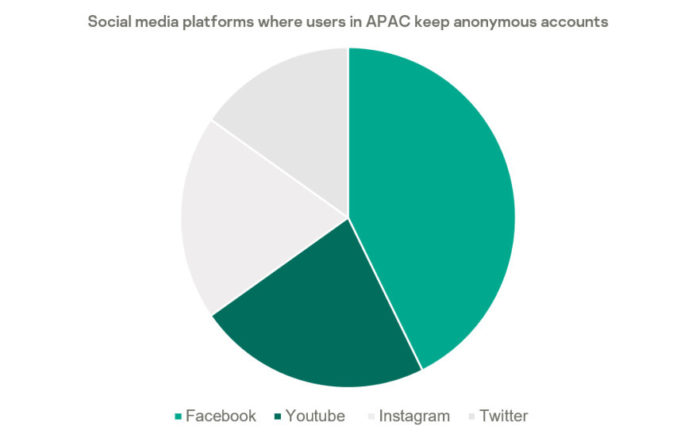 Do you have an anonymous account online? The latest survey conducted by global cybersecurity company Kaspersky confirms that you are not alone.

More than 3-in-10 users in Asia Pacific (APAC) admitted to having a social media profile without their real names, photos, and personally identifiable information (PII).

Conducted in November 2020 with some 1,240 respondents from the region, the “Digital Reputation” research shows that the power of anonymity is being used the most in Southeast Asia at 35% followed by South Asia at 28% and Australia at 20%.

While it may be frowned upon at first glance, the use of “nameless and faceless profiles” is two-pronged. Survey results revealed how this reality allows individuals to chase their passions and to harness free speech but at the same time to conduct malicious and harmful activities.

The quantified percent is that almost half (49%) of those surveyed stated that they use anonymous accounts to exercise their freedom of speech without affecting their reputation, while 48% wanted to indulge in their secret interests that they were not too keen on having their friends find out about.

More than a quarter (34%) also use these accounts to be able to disagree with someone or a news online “without using my real identity.” Although 30% used an anonymous social media account for the fairly innocuous activity of sharing information about their favorite artists and interests, 22% were also engaged in online stalking.

Only a small percentage (3%) reported using an anonymous account to deflect spam emails from their actual accounts, avoid doxing, serve as an alternative for other purposes such as gaming and prevent external agencies from having access to their real email accounts.

The crux of these findings is that consumers in APAC are increasingly becoming aware of the reputation they are building online and its importance to their real lives. On this basis, it is not surprising that 49% of the respondents will check the social media accounts of a brand or a company before purchasing their goods or services.

A point worth noting for businesses is that more than half (51%) of the survey respondents underlined the importance of a company’s online reputation. Nearly 5-in-10 (48%) asserted that they avoid companies who were involved in a scandal or had received negative news coverage online.

Additionally, 38% also stopped using a company’s or brand’s products once they were embroiled in some kind of crisis online. Almost half (41%) also revealed that the reputation of the brand’s endorsers affects their view of the brand.

When asked about brand’s transparency on their online pages, 50% of users in APAC think that companies should not delete negative comments on their social media accounts.

“From the initial purpose of finding and connecting with friends and families, social media has evolved and will continue to evolve in unprecedented ways. It has played a key role on how we socialize and identify with each other, but now, we have arrived at a fork in the road where virtual profiles of both individuals and companies are being used as a parameter for judgment,” says Yeo Siang Tiong, general manager for Southeast Asia at Kaspersky.

“Our latest survey confirmed that consumers now hold companies accountable for their online reputation, in the same way that individuals’ behavior on social media is now being used to determine one’s credit score, to screen one’s employability, and even to either reject or approve one’s Visa request. With these real-world repercussions, we must learn a fine balancing act between privacy and security to be able to secure our increasingly crucial digital reputation,” he adds.

To help consumers in defending their online reputations, Kaspersky shares five important steps that we can all take to ensure that we are protected and secure online:

The National Association of Data Protection Officers of the Philippines (NADPOP), the Philippines’ first organization for data privacy and protection, will train Filipino micro,...
Read more