Filipinos Among the Most Confident in Asia-Pacific About Opportunities to Get Ahead: LinkedIn

LinkedIn, the world’s largest professional network, has just revealed its inaugural LinkedIn Opportunity Index in the Asia Pacific (APAC) region where it has more than 153 million members including six million in the Philippines. The Index is a composite measure that seeks to understand how people perceive opportunity and more importantly, barriers that may prevent them from getting to those opportunities. The research surveyed over 11,000 respondents in nine markets in the Asia Pacific region – Australia, Chinese Mainland, Hong Kong, India, Indonesia, Japan, Malaysia, the Philippines, and Singapore.

The Philippines ranked third along with the Chinese Mainland on the LinkedIn Opportunity Index, with Indonesia and India taking the top two spots. On the other hand, more developed markets such as Japan, Hong Kong, and Australia trailed in the Index as people in these markets expressed concerns over the economic outlook, and generally felt more cautious about their chances of accessing and achieving success with opportunities that are relevant to them. 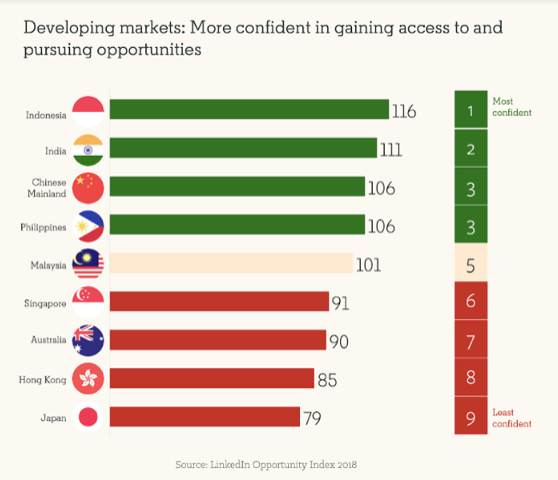 Olivier Legrand, Managing Director, LinkedIn in Asia Pacific, said, “We believe access to opportunity should be universal and for everyone. With the inaugural LinkedIn Opportunity Index, our aim is to gain an insight into the aspirations of people across the Asia Pacific region, how they feel about the opportunities they want to pursue, as well as the barriers that may stand in their way. The growing workforce in the region is a key asset that, if harnessed effectively, is going to continue to drive the economies. Over time, by tracking people’s perception of opportunity and the barriers they face, we hope we can continue to facilitate more of a balance between demand and supply in the opportunity marketplace.”

More than half, or 53 percent, of respondents in the Philippines see “starting my own business” as their definition of opportunity. They are similar to respondents in Indonesia (50%) who are interested in entrepreneurial pursuits. In contrast, respondents in Australia (13%), Hong Kong (13%) and Japan (7%) are least likely to embark on new ventures.

A significant 37 percent of respondents in the Philippines also interpret their ultimate opportunity as being able to learn a new skill. In an environment concerned with the impact of AI/automation and other shifts in the labour ecosystem, professionals also recognise that with jobs rapidly evolving, they need to upskill to stay relevant.

Similar to the rest of APAC, a significant number of respondents in Philippines (46 percent) believe that their less optimal financial situation is the top obstacle to their access to opportunity.

While APAC respondents cited barriers to opportunity such as lack of a strong network and connections, a difficult job market, and lack of required professional skills, respondents in the Philippines ranked innate or psychological reasons such as fear of failure (24 percent) and lack of confidence (20 percent) as bigger hurdles to overcome.

The Philippines believes diligence is currency to get ahead in life

“The barriers to realising opportunities in life are very real, and despite the diversity of the Asia Pacific region, there are more similarities than differences when it comes to our hopes and aspirations. The good news is that no matter what opportunities mean for each one of us, we can count on our community for help. Whether it is learning a new skill, networking or sharing guidance, we can all help one another to unlock and create opportunities,” added Legrand.

LinkedIn commissioned independent market research firm, GfK to conduct this study between September and October 2018. The survey was conducted among 18 to 60 year olds across nine markets via online interviews. The survey had more than 11,000 respondents.

In total, there are seven factors that contributed to a composite measure of opportunity:

Perceptions around socio-economic and lifestyle factors:

The measures used in the survey, including the variables that made up LinkedIn Opportunity Index were identified through a series of interviews with a mix of young, mid-career and established professionals across Asia Pacific.

The Index uses “100” as a baseline score for confidence. A higher score represents greater confidence from people living in a specific market.

Can cobots future-proof your operations? Register for the FREE virtual expo on Oct 6-8

From digital workflow management to contact tracing mobile apps, technology and innovation have been integral parts of overcoming the challenges presented by...
Read more

The new normal brought about by the pandemic has presented a new set of challenges for the Filipino entrepreneur, yet resourceful Pinoys...
Read more