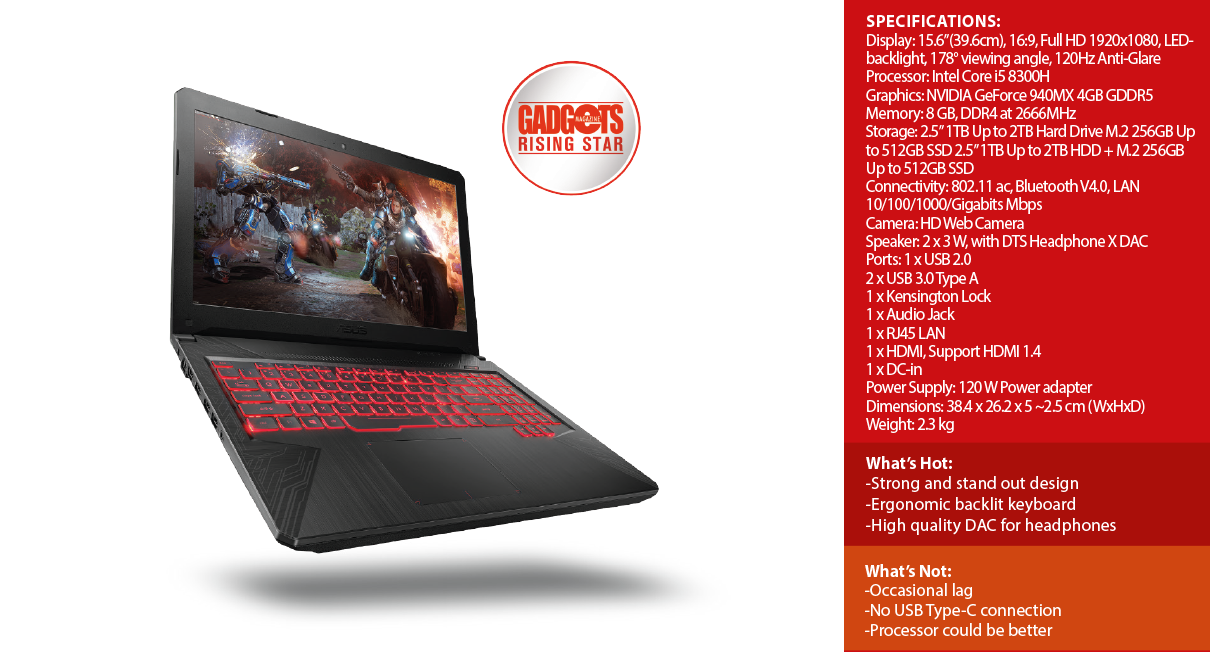 For some players gaming is life, but not everyone can afford the more known line of gaming laptops available in the market. Knowing this, Asus designed the TUF Gaming FX504 laptop for the budget-restricted hardcore gamer. But will it live-up to its promise of gaming on a budget? We tested a unit sent to us by Asus Philippines to find out.

The machine, at first glance, screams gaming laptop with its gunmetal gray color, red backlit keys, and cutout elements borrowed from the ROG Zephyrus series. The screen is adequately sized eschewing the slim bezel design most devices have these days. Together with the traditionally placed camera, the screen design still keeps to its basic styling, which is not bad per se, but something that seems to be out of place in the look it is going for. Also, its over-all profile is slimmer than ROG laptops.

The TUF Gaming FX504 has an adequate 15.6-inch IPS display with a 1920 x 1080 resolution. The model unit we had sports an 8th generation Intel Core i5-8300H processor clocked at 2.30 GHz, 8 GB of 2666MHz, DDR4 RAM, and Nvidia GeForce 940MX graphics. Storage-wise, it has 128 GB SSD and 1TB HDD on board, but both are expandable up to 512 GB and 2 TB respectively. The only peripheral that comes with it is the charger, which is a bit chunky and generic, but otherwise is acceptable.

Being a budget gaming laptop, I expected that this model would have to cut some corners. Over-all, it indeed have parts that could have been made better, but performance is still acceptable.

The TUF Gaming FX504 indeed is a cross between the traditional ASUS laptop line and the ROG gaming series, best seen by the lack of ROG or Strix branding that Asus loves to emblazon on their other devices. My first boot-up with the device was a tad slow, taking roughly a minute without any first time setup involved, yet on my succeeding tries, the device booted up at roughly 15-20 seconds from pressing the power button to the home screen.
The device was adequately fast but even with just the browser and a few MS Office software, it suffers from occasional stuttering at times which made me queasy, even with light-gaming, for fear of it suffering the same fate. Otherwise, the device is capable of light to medium gaming.

Being a gaming laptop, it’s devoid of a USB Type-C port, which is a shame, given that there is a move towards the utilization of such across most devices. Otherwise, it has all the standard ports a gamer would need such as an HDMI port for external displays, a single RJ45 LAN port for a stable wired internet connection, 2 USB 3.0 ports for faster file transfers, 1 standard USB 2.0 port, and a 1 3.5mm audio jack. I personally like how it kept most ports on one side, keeping it simple and clean, although I would personally have preferred it to be on the right side for the sake of wired peripherals.

Benchmarking proved that it can run most game titles with ease, albeit at the lowest to mid settings for some heavy games, while lighter games can be handled at the best settings. One might be disappointed with battery life though as it just lasts up to roughly 4 hours on full charge. Should one decide to play more than four hours, they should do so at a nearby power outlet.

With an SRP of PHP 56,995, the ASUS TUF Gaming FX504 sure feels a bit lacking in key aspects. But if you are cash-strapped, then the device might be worth a look. Should you be a hardcore gamer, one may opt to save a little more for the entry-level, but better equipped ROG models instead.

Looking for a budget gaming laptop? This might be for you.